‘Going Back’ to What?

It's a good question.

May 8, 2020  0
Podcast Available for Premium Subscribers

All around the country, U.S. dioceses are taking it in the pocketbook, and one wonders if that's one of, if not the motivating factor in bishops' growing anxiety to get parishes reopened. But whenever the reopenings do occur, and people can start "going back," the question arises: They're going back to what?

Despite the clear, universal law of the Church about laity always and everywhere having the right to receive Holy Communion on the tongue, many individual bishops — and in the case of Michigan bishops, the entire state conference — are forbidding Communion on the tongue. And boiling right down to the parish level, even some pastors around the nation are saying they will not distribute the Sacred Host on the tongue.

Portland archbishop Alexander Sample has reaffirmed to Church Militant an earlier statement by him saying the faithful have the right to receive on the tongue, granted to them by universal Church law. But his March statement went further, directly addressing the "health risk" issue of receiving on the tongue:

This morning we consulted with two physicians regarding this issue, one of which is a specialist in immunology for the state of Oregon. They agreed that, done properly, the reception of Holy Communion on the tongue or in the hand pose a more or less equal risk. The risk of touching the tongue and passing the saliva on to others is obviously a danger, however the chance of touching someone's hand is equally probable and one's hands have a greater exposure to germs."

Likewise, the nation's official conference of Catholic bishops agreed that with both, the health risk is no greater one way or the other, and Church law says the faithful always and everywhere can receive on the tongue, regardless of what any local bishop says.

But even in the face of Universal Church law as well as medical counsel saying one manner of reception does not pose any greater risk than another, quite a few bishops around the nation are digging in, saying they don't care — receive in the hand or hit the road, Jack.

The Communion-reception wars going on in dioceses around the country are a microcosm of a much deeper problem.

Bishops' orders to their priests to not give Holy Communion on the tongue while Rome itself says the faithful have the right to receive on the tongue puts priests in an impossible situation. Do they deny the faithful their right, thus ignoring the universal law of the Church, or do they proceed and disobey their bishops — bishops who have issued a directive they have no authority to issue?

Once again, this is insane.

But as we have been saying since the Wuhan virus first started having its impact on the economy and the Church, what it is revealing is people's true colors. It's unmasking all the pretenses and phoniness so present and dominant in the Church and the culture.

Citizens who demand their states be reopened are clashing with their overreaching governors all over the country who have clamped down to such excesses that protests are now the new normal. With rare exception, those protests have taken on the hue of a red-state, blue-state rival.

The same underlying phenomenon is at work in the Church as well, as orthodox Catholics are driving a stake in the ground, demanding that their parishes be reopened as well as making clear calls for reception on the tongue when they are reopened. Less orthodox bishops, like less constitution-abiding governors, are opposing them.

For decades, there has been a great division in the Church in the United States, around the world really, but specifically here in the United States. It's the case that heterodox and liberal bishops have created a kind of alternative Church that appears more Catholic than it oftentimes actually is. These men and their predecessors have destroyed Church buildings and architecture — as well as the liturgy in them — and the formation of the men who would offer Mass in them.

Schools, and religious education in general, have been so neglected or actually overrun that it is more likely the case that your child will lose his faith attending a Catholic school than he would preserve it. Scandal after scandal has broken out and now become so commonplace that nothing short of performing abortions in the parish hall would shock anyone.

And now the financial damage is beginning to emerge — and yet even there, greedy bishops are grabbing up government funds to stay open — funds designed to keep small businesses open and the little people from suffering an even worse economic impact than they already are.

The Communion-reception wars going on in dioceses around the country are a microcosm of a much deeper problem of — dare we say the dreaded D-word? —division, something many of these same bishops almost delight in, in accusing Church Militant of causing. We don't cause division, Your Excellencies — as we have said for years — we simply shine the light on your already existing division that you pretend isn't there. But it is there. And the Wuhan is laying it bare for all to see. Lying to people about us causing it is demonic.

Many Catholics, poorly formed for decades, will not return even when the doors do open. They don't really believe what the Church teaches anyway.

Faithful Catholics are going to have to choose sides and do so soon. Too few bishops and their crooked, complicit chanceries deserve any of your support — financial or otherwise. They need to be left to rot on the vine, or better stated perhaps, finish rotting on the vine.

What the Wuhan has done in the U.S. Church is set in motion a series of events where a great diminishing of the Church will occur. Sadly, many Catholics, poorly formed for decades, will not return even when the doors do open. They don't really believe what the Church teaches anyway, largely because they don't even know because they were never told.

They've gotten used to enjoying sleeping in on Sundays and lounging about the house. They don't understand why they have to go, and the current situation has simply brought that to the forefront of their minds. Why can't they zip around the internet in their underwear on Sunday morning and find some online Mass they dip in and out of until they just stop doing it altogether?

Everywhere they go, they hear about "faith journeys" and "faith traditions" and "everyone goes to Heaven," firmly planting in their minds that all religions are pretty much the same and everyone is saved. The music sucks, the preaching is a sure cure for insomnia and the politically correct gathering is all about me — all brought to you by the gay or highly effeminate man in the robes surrounded by a dozen aging women who clearly run the show.

So, yes, on the question if they go back, what exactly are they going back to? 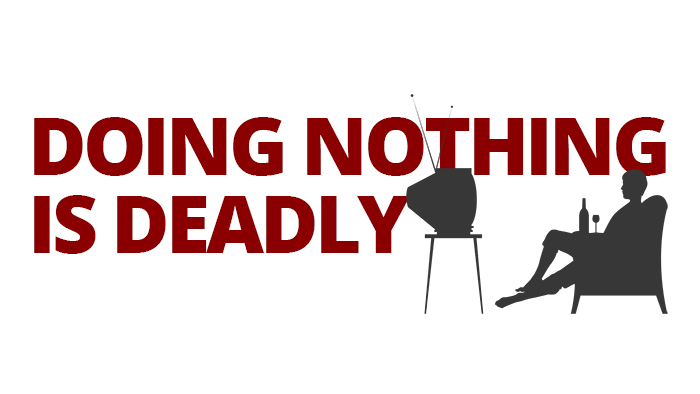 Doing Nothing Is Deadly
Abuse of authority must be challenged.