And for good reason.

The bad guys in the Vatican are absolutely feeling the heat and are lashing out, most especially papal pit bull Cdl. Oscar Maradiaga of Tegucigalpa, Honduras.

A few days back he gave an interview to the leftist Italian paper La Repubblica in which he said (channeling Hillary Clinton) that all these stories of sexual and financial corruption in this pontificate are the result of a vast right-wing conspiracy.

His Eminence might want to investigate where that particular storyline ended before resorting to it. Hillary used it back in the Monica Lewinsky days as a way of deflect from husband Bill's Oval Office "activity" with the young intern. Turns out, of course, the charges were simply true on their own, not part of any conspiracy, as the blue dress proved.

The corrupt gay mafia running the Church these days has reason to be concerned. And for the record, it is not their souls they are concerned about, but their St. Peter's Dome-sized egos and financial profitability.

The Vatican is sinking further and further into debt as loads of Catholics have simply decided to close their wallets and let this pontificate drown in the morass of its own dealings. In fact, speculation has grown so rampant that Maradiaga actually had to go on the record and deny that the Vatican is approaching bankruptcy. But he can deny all the wants; the facts are the facts.

Not only are donations, especially from America, way down, but so is tourism. The sorry truth is that many Catholics have simply lost any desire to either visit Rome or stop by the Vatican while Francis is pope. And Rome is becoming very dirty: trash everywhere, dog feces all over the place, homeless bedded down in nearly every block around the Vatican.

Add to the public information that behind the scenes is one scandal after another — the thieving of hundreds of millions of dollars by Francis cronies — and you have a train wreck in the making.

He made the almost funny claim that we are all reporting on this stuff because all we want to do is discredit the bad guys.

He has things a little backward. We aren't trying to discredit them by reporting this stuff. We are reporting it — the truth — and the result is that they are being discredited, which is the correct result.

And believe us, that's not hard to do. Maradiaga and the corrupt gay mafia discredit themselves very easily, espeocially when they make idiotic claims about faithful Catholic media like: "Part of the U.S. Church pretends that Francis' encyclical on ecology doesn't exist; they prefer donations from the oil companies."

What? Church Militant can't speak to or for any other faithful Catholic media in America, but we are happy to open our books and show you that no U.S. oil companies — or any other country for that fact — give donations to Church Militant. Although we guess if they came with no strings, what the heck? Oil and fossil fuel are not intrinsically evil, like Occasional Cortex wants you to feel.

At the crux of all this is an attempt to capitalize on the latest jargon of "fake news." Maybe they think using current lingo will make them sound relevant and hip. Or maybe they think applying the moniker "fake news" to any piece of criticism will make people easily dismiss it, as in: "Oh, it's fake news. No need to listen anymore."

But again, the decidedly not hip crowd of prelates, the bad ones in control, completely miss the point — which is why Cdl. Lorenzo Baldiserri on the first day of the synod press conferences at the beginning of the month must have felt so free to label criticism of the synod's working document as "fake news."

There's little else so pathetic as an old dude trying to sound cool and "with it." And for the record, the term "fake news" may have originally been trotted out by the liberal lamestream media, but President Trump quickly co-opted it and turned it around on them. CNN's ratings have never been the same since.

The term "fake news" is applied to liberal broadcasters and writers, Your Eminence, not the good guys; so you need to go back to "getting with it" school and retake a few classes.

Bottom line on all this: The increasing attacks against faithful Catholic media — from the pope, his close associates, high-ranking members of the hierarchy and their poser reporter buddies — proves one thing: These bombs are hitting their targets. It used to be the case that they were the only game in town, and suddenly they turn around and here we all are, asking probing questions, reporting on substantive stories that reveal their dissent and heresy and evil.

A few years back when Church Militant was in the Holy See Press Office, a secular reporter sitting a few seats away from me groused out loud: "How did all these Catholic internet reporters get in here?"

Good question, even if it was asked in a whiny tone befitting her indignation. The answer is: The monopoly of the liberal Catholic media is over. No longer are all Catholic journalists bent on using the narrative of "The Church has to change and adapt to modern times." There are some new kids on the block, and the old guard hates it.

They are intellectually as well as spiritually unfit for their jobs, and each passing scandal that we all report on exposes them and their wicked prelate friends more and more. This is why you see a barrage of rants from all of them, normally led by Evil James Martin, trying desperately to label us all as "haters." That's what people with no argument do: go straight for the messenger instead of engaging the message itself.

So, easy questions here for Maradiaga and the lot of them:

These are all important questions, no doubt. Given the public information that is now out there about all this, every one of these questions is absolutely valid.

There is, however, one overriding question that needs answering: Why is it only faithful Catholic media asking these questions? Why don't the liberal Catholic "reporters" feel the need to explore the same issues?

And yes, you phony journalists, you're darn right you're going to get called out on all this. You are as much a part of the crisis as these wicked prelates. You carry their water for them because you disagree with Church teaching and want to see it changed. As you have rightly intuited, there's new kids on the block; and while you may still enjoy the privileges of being here first, the truth is that your monopoly is broken.

The good guys have arrived — and the clock has started ticking on your watch. 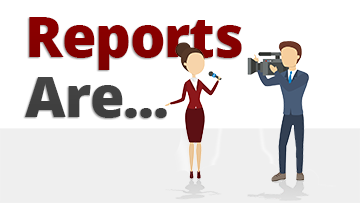 Reports Are ...
Things are a little amiss in Catholic media land.