Defeat — and then convert.

America is becoming less religious — no news there. It's the continuation of a decades-long decline, but it is now accelerating. But what few have recognized, at least in any formal sense, is that this trend is also present within politically conservative circles. This is a sea change from days gone by when Christians had a dominant influence.

Back in the days of Ronald Reagan, it was the Moral Majority of Jerry Falwell, a largely Protestant presence that drove the agenda on the political right. That was the reality for roughly 20 years, until the era of George Bush in 2000–2008. By the time Bush was done and Obama arrived, what was once a dominant force was already greatly diminished in GOP circles. In short, the conservative political project had lost its specifically Christian character.

It didn't seem that way during the campaign of Donald Trump in 2016, but it was already in full swing — just undetected because of the strong support of Christians for Trump. What we are seeing unfold now is a social conservatism as opposed to a religious one. Trump certainly did not cause this, but probably without consciously realizing it, he tapped right into the "religion indifferent" crowd now becoming dominant in conservative circles.

What we are seeing unfold now is a social conservatism as opposed to a religious one.

Check out some of the numbers:

In the 2016 Republican primaries, Trump had much stronger support among those who attended church services less frequently.

In short, among self-identified political conservatives, the more they disregarded church attendance, the more inclined they were to vote for Trump. Underscoring all this, a 2020 Pew Research study revealed that fewer than half of Republicans said "being Christian" was important to them.

That helps explain the enormous change in Republican voters' attitude toward same-sex marriage. Their support doubled in just 10 years to what is now a majority. It went from 28% support in 2011 to a whopping 55% support in 2021.

This is no longer Ronald Reagan's Republican Moral Majority party. That cuts across every major narrative you can find, especially the White Christian nationalist fabrication that the Marxist media yammer on about nonstop. There is a definite nationalist streak, even a foundational one, among Trump supporters, but it isn't driven in any way by "Christians."

As for it being specifically "White," that too is not really true. Hispanics and Blacks turned out in record percentages to vote for Trump in both 2016 and 2020. It's true, of course, that among Hispanics and Blacks, Democrats are still predominant, but that is evaporating pretty rapidly. The conventional wisdom that increasing racial diversity would secure a Democratic stranglehold well into the future is being turned on its ear.

So if the conservative movement isn't really all that "White" and also isn't "Christian," then what is it? Well, we are left with the "nationalist" character. This is where the reality is.

Today's Right does not think in terms of religion or race, despite the heavy-handed claims of the Left. The truth of the matter is simply that the Right sees all this, ironically enough, in strictly Marxian terms: a class struggle between average-Joe Americans and a dominant government–corporate partnership actively hostile to them. Religion and race have very little to do with it.

The new social conservatism wants to overthrow this new dominant order. That is a complete turnaround, a 180-degree flip in convention, from the halcyon days when the Left was the one agitating against authority. Those firmly ensconced in the New Right are the ones embracing overthrow and unconventional tactics.

The reason is pretty obvious — the Left succeeded in winning and gaining everything it wanted. Now, with almost total power in its hands, the Left has become massively oppressive with the demand that everyone bow to its worldview. It used to be that the Left claimed all it wanted was a live-and-let-live approach. That was probably never true, but even if it was, it has changed drastically. Now, you offer a pinch of incense to the gods of the Left or you are actually punished.

Now, with almost total power in its hands, the Left has become massively oppressive.

You may even agree, at least in principle, with gay marriage, abortion in some cases, and so forth, but to be ordered to bow down has rubbed enormous numbers of Americans the wrong way, regardless of their views on religion or the color of their skin. In short, post-Obama cultural progressivism is being rejected by huge numbers of Americans.

So what does all this mean for Christians, specifically Catholics, on the political scene? Interesting question. Deeply religious people, especially Catholics, need to understand the new dynamic at play here. While, as always, it's a spiritual war because of the moral issues at play, it is not perceived that way at all by the vast majority of those who identify as political conservatives. In fact, they don't even think in those terms — completely off their radar.

True, there is an alliance around what could be called the new civic religion. There is a lot of overlap, certainly much more so than with anything on the Left. But, all this means that, for the moment, the choice Christians have to make is to either take their seat at the back of the bus, where they are welcomed by those in charge on the Right, or just not be on the bus at all.

Do the faithful simply withdraw support and likely ensure a win by the Marxists? Or do we stay in the game, fight this fight and then try to evangelize and convert, having to perhaps swallow hard at various moments? This is the new political reality, like it or not.

Catholics lost the possible initiative back in the 1950s and early 1960s, in what you might call the "era of Sheen." The 1970s and 1980s gave birth to the Protestant Moral Majority, the "era of Falwell," which had some influence owing to the sheer numbers of Protestants in America, but by 2000, was on the way out. We are now in the "era of Obama" and the entire, oppressive Marxist regime is being rebelled against by average Americans who are largely as unconcerned with religion as they are with race.

For those who decide to stay in the game, it will be a two-phase war, consisting of defeating Marxism and converting political allies. It's not clear at all that the U.S. hierarchy shares either of those goals. Interesting times, indeed. 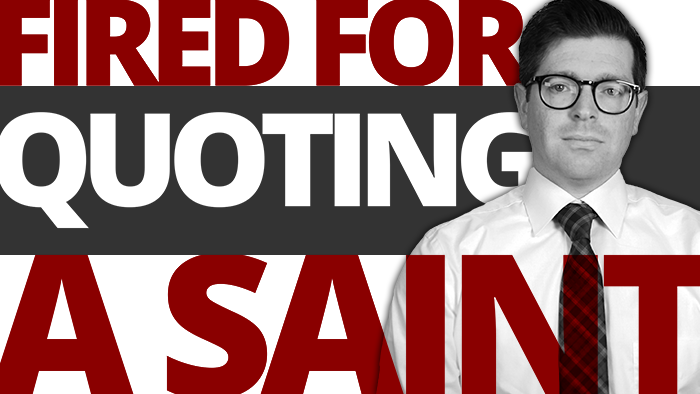 Fired for Quoting a Saint
Don't send your kid to a Catholic school.