The Church of Nice lashes out.

If you ever wanted to see just how "not nice" the Church of Nice can be, the case of it lashing out at Ven. Abp. Fulton Sheen is a prime example.

Late Tuesday, news broke that the beatification of the famed preacher-bishop was suddenly stopped dead in its tracks because of "the request of a few members of the Bishop's Conference who have asked for further consideration."

First, there is a great mystery surrounding the identity of the "bishops." Church Militant can report, from archdiocesan sources from Chicago, that Cdl. Blase Cupich is one of those bishops. Another one, according to our sources,  is — no surprise here — New York Cdl. Timothy Dolan, who practically made a career out of trying to prevent the canonization of Sheen, spending close to a million bucks of parishioners' money on high-priced lawyers to keep the body from being returned to Peoria.

Dolan was slammed by the New York courts and finally forced to hand over the body, but — in a totally tasteless move — he ordered that the body be handed over in the dead of the night. But sources close to the New York archdiocese tipped off Church Militant, and we were there to capture images of the transfer of Sheen's remains. Cupich is Pope Francis' right-hand man in the U.S. and nothing of major import in the U.S. Church happens without his stamp. Sheen was, of course, a champion of orthodoxy and empowering the laity to help "save the Church," to use his words — two things Cupich despises.

The order to halt the beatification process, just 18 days before it was supposed to happen, came from the Congregation for Saints in Rome.

Vatican sources tell Church Militant that the order to halt beatification — a beatification that had already been approved to go ahead — was done at the demand of the bishop of Rochester, New York, Salvatore Matano, who roped Dolan and Cupich into the plan to slam the brakes on it.

The prefect of that Roman Congregation is none other than Cdl. Angelo Becciu, a prelate deeply involved in the McCarrick scandal, who acted as a go-between for Pope Francis and the corrupt, homopredator former Cdl. McCarrick.

According to our sources close to Becciu, he decided to reverse his approval because Matano communicated to him that he is fearful Sheen will be named by the N.Y. State attorney general as a bishop who assigned a predator priest to a parish where the priest — Gerard Guli — abused some victims.

Sheen had been assigned as bishop of Rochester from 1966–1969. But this is where things go weird with the story.

All of this was thoroughly investigated already by the Peoria diocese.

Guli was contacted by investigators in charge of the Sheen case and he told them flat out that Sheen never assigned him to a parish once he returned to Rochester from West Virginia to take care of an eldery parent.

Make note of that: Guli, the priest in question, himself denies the veracity of the claim Sheen appointed him to anything. Sheen gave him no assignment, in fact.

Guli tells investigators it was Sheen's successor, Bp. Joseph Hogan, who put the molester priest back into circulation. Guli was eventually laicized.

What's strange about all this is this: Matano knows all this info. The Sheen cause has been vetted left and right, up and down, for years. The Congregation of Saints also already knew all this, and set a date for the beatification to move forward.

Then Matano apparently lost his mind, roped in Cupich and Dolan, and with their influence, everything was stopped.

What's very telling here is that we cannot find any case of any Pope reversing his approval for a scheduled beatification because he is waiting on civil authorities to conclude their investigations.

But what's also worth noting is how much the establishment Catholic media jumped on the story and used it as an opportunity to slam Sheen, insinuating that he was gay and covered up a sexual assault by a priest.

It's almost as if there was a concerted effort on the part of corrupt cardinals, who put the word out to their sycophant media, to attack.

Look at this headline (left), which came out almost immediately from the Catholic News Agency (CNA) on Twitter, with its scandalous assertion that Sheen was part and parcel of this whole sordid, sex abuse cover-up evil.

And extremely important here: The case CNA cited originally had nothing to do with this newest case of Guli. They published an entirely different account that had been discredited years earlier.

The bishops' news agency — CNA — then quickly changed the headline to soften its over-the-top, click-bait wording, but kept the article essentially the same.

That case that CNA couldn't wait to crow about was actually already vetted in the beatification process and the civil court where it was determined to be so over-the-top that the lawyer who brought the case back in 2007 was actually sanctioned by the court for filing it. But you would have to read very down deep into the article to find that nugget of perspective. The big nothing burger that this false accusation is didn't stop Catholic News Agency from pushing it out there. Disgusting.

You wonder if Dolan or Cupich called CNA and told them to print that garbage.

The whiny Christopher Lamb of the U.K. Tablet also couldn't wait to pile on Sheen and bring up already-settled stuff, stuff again that has been vetted and Sheen has been completely cleared of.

But if all that wasn't enough, Elizabeth Scalia — another queen of the Church of Nice and cooperator with Bishop Robert "no one-goes-to-Hell" Barron — actually had the gall to tweet out the implication that the beatification was being held up because Sheen was gay.

She called him "flouncy" (code word for feminine and dramatic) and said if it comes out that Sheen was indeed sexually attracted to other men, that he would be a role model for other same-sex attracted men trying to live moral lives.

Seriously! Frankly, what the hell? And we mean Hell! Where do these Church of Nice surrogates and bishop sycophants get off saying this kind of stuff? They are liberal destroyers at heart and want the Church conformed to their view of the faith.

And in the case of Rochester Bp. Matano — so spooked by the fall-out of the homopredator sex abuse crisis that they pull in big guns to convince the Pope to slam on the brakes.

The so-called Catholic journalists and pundits seem to have no scruples about what they have to say, or what insult they have to hurl or innuendo they have to plant to keep their relationships with the crooked hierarchy.

How is this any different than homoheretic Jesuit James "Brokeback" Martin saying that recently canonized Cdl. John Henry Newman was gay and insinuating he had a lover, and because of that, he is a great role model for modern-day gays in the Church?

These comments, headlines, tweets and insinuations are filthy and scandalous.

These comments, headlines, tweets and insinuations are filthy and scandalous.

But here, in the case of a bishop on his way to sainthood, they lay out the most scurrilous charges with not one shred of proof or relation to the truth.

Perhaps Matano's deep fears about the N.Y. State attorney general naming Sheen have some merit — but remember, when the Pennsylvania grand jury report came out, there were numerous errors in it.

Matano is more afraid of the N.Y. State AG report and is unwilling to trust the in-depth scrutiny Sheen has already been through — this Guli story included. That applies to Dolan and Cupich as well.

So get the big picture, the bottom line here. Rome has indefinitely delayed a beatification because prelates in the Church are terrified of the bad PR that would emerge if the AG were to include his name on a list — even after all of this had already been vetted, thoroughly, multiple times by both Rome and Peoria. 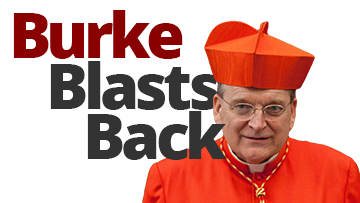 Burke Blasts Back
Fighting the evil.