We gotta say this: If you are a practicing Catholic and you don't rise up in protest against your local chancery, then you are a fool because you are blindly following a bunch of crooks and liars.

Do you really think the rapes of thousands of altar boys is just a single, standalone crime? Or is it better to see it as one issue that came to light, born from a cesspool of immorality among the hierarchy? Any environment that can produce that kind of evil is a wicked environment that has many other evils as well.

One of those evils is the absolute knee-jerk reaction to lie and cover-up anything and everything when it is discovered. These wicked, sinister bishops wouldn't know how to deal truthfully if their lives depended on it, which, in reality, they do — their eternal lives.

Case in point is the complete whitewash that occurred here in Detroit last week after Church Militant aired a secret video of the archdiocesan music director admitting that he is not only gay, but that he lives with his gay partner and has for 15 years. That man, Joe Balistreri, is close to Abp. Allen Vigneron, who, once some sordid details started coming out a couple months ago, sent his senior clergy to go and lie to people to cover it up.

These wicked, sinister bishops wouldn't know how to deal truthfully if their lives depended on it.

Those people, Msgr. Michael Bugarin and Bp. Gerard Battersby — who lie about Church Militant's reporting at every turn — all of a sudden got caught in their lie, a lie sanctioned by Vigneron himself.

Once the Church Militant undercover video aired, then it was major damage-control time. Vigneron called in the attorneys, Balistreri, and human resources, and the lies and spin and whitewashing began in earnest. On Friday, the human resources department sent an email, not to the public, not to the media, but strictly to clergy, saying Balistreri's time at the archdiocese of Detroit was officially over, a move they were forced to make because of Church Militant reporting.

But take a close look at their statement — it's tricky, deceptive wording: "Joe Balistreri has separated from his positions as the archdiocesan director of music ministries and as director of music at the Cathedral of the Most Blessed Sacrament. The separation was effective Wednesday, Feb. 17, 2021."

So, where to begin with this? First, Wednesday is the day the Church Militant aired its video (which we posted beginning at midnight). We know for an absolute fact that various senior personnel at the archdiocese of Detroit were aware of it and already in meetings that morning.

If there had been a separation on Wednesday, why was Balistreri sitting in meetings with archdiocese of Detroit officials for hours and hours on Thursday — which CM has confirmed — with at least one attorney?

Was he fired (or "terminated," in the vocabulary of corporate America), or did he resign? If he resigned, why not just flat-out say so and wish him luck in his future endeavors, as is completely customary when an employee in good standing moves on to greener pastures? But if he was fired, why not simply announce that?

After all, when the archdiocese of Detroit dumped the lesbian music minister at a local parish last summer, they flat-out told her she was "terminated" for violating the morals clause. Well, Balistreri was also in violation of the morals clause — so why didn't his announcement say he was "terminated," instead of the wildly ubiquitous phrase "separated from his positions"?

Conjoined twins get separated, not employees. But allow us to propose something to you: If the public announcement says "separated," that is typical corporate-speak for covering up a payoff. The disgraced employee is too great a liability to keep on board so senior management decides he has to go.

However, the employee knows something, usually dirt (and a lot of it), and the employer knows that. So they can't out-and-out fire him because he threatens to sue and go to the media.

The Detroit archdiocese is a moral wasteland.

And the employer dodges public revelations of its dirty laundry. That's how the game is played. Now, let's bring that corporate template down to this case of the archdiocese's long-standing openly gay music director. The word "separated" is the linchpin here, not to mention the nearly day-long meeting with attorneys the day after he was "separated from his positions."

If someone is fired, they don't come back the next day with attorneys and meet with their former employer for the day. But see, Balistreri was not, in fact, fired. Every single sign points to the fact that, after outing himself on video, the archdiocese of Detroit then paid him hush money to not out numerous gay clergy in the archdiocese or not to sue in open court (in which case, all Vigneron's secrets would come pouring out on the public record).

So was there an NDA, Archbishop? How much of faithful Catholics' money did you have to pay him to keep his mouth shut? How much did you pay your attorneys — again with the money from the collection basket — to participate in the foul deeds?

Vigneron and his fellow crooks do nothing but play head games. They are allergic to the truth because if the truth came out, they'd be completely exposed. There are many more issues here than just the whitewash; however, the whitewash now opens the door to all of those other issues — issues like "why did Vigneron allow his senior staff to attack and lie about a good priest who became aware of the Balistreri business?"

Why did Bp. Battersby lie to the priest's parishioners about the reason why he was removed — defaming him in the process? What various priests were in danger of being revealed as actively gay by Balistreri if he had not been paid off to stay silent or not sue? The Detroit archdiocese is a moral wasteland, and Catholics who keep giving money to this crooked, gay, crime syndicate need to wake up.

It's time to have Vigneron and his cronies "separated from their positions." 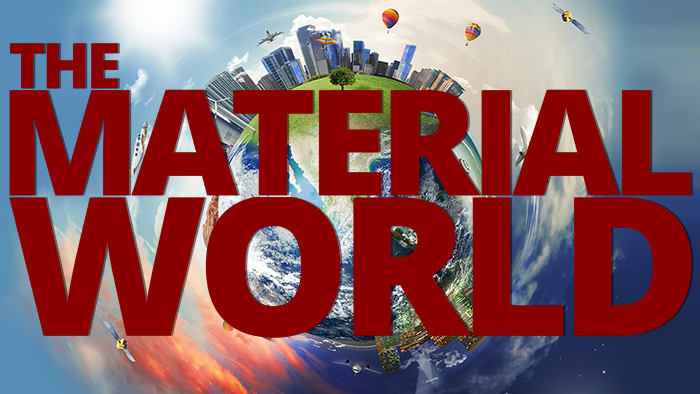 The Material World
Matter matters — a lot more than most people realize.