Heart of the Crisis

It's as plain as the nose on your face.

As we survey the crisis in the Church — and yes, Church of Nice Catholics, it is a crisis — one common thread runs through all of it and ties everything together, directly and indirectly.

And that is the presence of unfaithful homosexual clergy.

Every major scandal you can point to right now, playing out, winds its way back to this evil.

And so we are very clear, here are some of them:

What has this enormous failing on the episcopate brought about?

The American episcopate has become a cesspool of wickedness and cowardice — uncaring, unmoved by the suffering of faithful Catholics all around them.

They have collectively, over the past 50 years, produced a sheepfold which has almost entirely walked away from the Faith.

The few who remain are largely ignorant of the beauty of the Faith, with even a third of weekly Sunday Massgoers rejecting belief in the Real Presence — the same laity who as a single religious body, more so than any other Christian body in the country, accept homosexual civil marriage in a majority: 55%.

In the face of these devastating facts, what does the episcopate do? Promote illegal immigration; issue 20 statements in nine months on gun violence while issuing none on abortion; distribute Holy Communion to pro-abort Catholic politicians; refuse to even consider excommunication for the most notorious among them.

And in the midst of all this, many of them have launched multiple fundraising campaigns, collectively taken adding up to billions of dollars.

They have desperately tried to paint a picture of things are now being in control, everyone can calm down, nothing to see here folks. We will investigate ourselves, doncha know?

They have collectively abdicated every responsibility of office they have while at the same time lashing out at laity who call them out and persecuting good priests who dare breathe a word in support of the suffering sheep.

These men may occupy the office of father, but they are far from acting like it. They have supplanted that sacred duty with being bureaucrats, and lousy ones at that.

Across the country, there is no voice of protest raised by bishops, no love or charity for the faithful demonstrated.

The sheep are viewed as little else than a flock to be fleeced and head-achy public relations nightmares spun so as to keep the money flowing in. All of this is to protect a world where active or passive homosexuality within their own ranks is accepted, promoted and treated with kid gloves.

They all went to seminary together and advanced on to bishop training school together where other gay bishops promoted them and taught them how to be "bishop."

This is a revolting and disgusting, depraved state of affairs, and it has created a de facto schism, an operational schism in the Church, where the establishment Church is little else than a gay dating service or gay nightclub and the faithful are relegated to the margins of the ghetto and hunted down.

The embracing of all things gay within the clerical ranks is not responsible for every evil that has befallen the Church, but it is, hands down, the leading cause of any corrupt situation you can see today in the Church.

Even Pope Francis has let the "S" word drop — schism. It sent up alarms all over Catholic Land when he said that last week, but why should it have?

There's been an informal schism for decades now, and it's being driven by homosexual clergy. 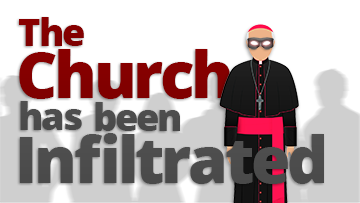 The Church Has Been Infiltrated
And is close to being overthrown.