And there's a good reason why.

My, are things heating up. And they are heating up earlier than any time we have ever seen.

And the reason is because of the stakes. They are enormously high. Actually, this one is for all the marbles, and all the players know it. That's why the intensity.

As Democrats keep persisting in their claims of foreign interference in the U.S. election, there is actually one known case where that looks very real — the situation of Pope Francis' Vatican trying to exercise at least some degree of influence in the final outcome.

The pope and his political allies in the U.S. hierarchy, who are often allied with Democratic politicos, have made very clear they are no fans of Trump and his nationalistic, America-first approach. It clashes dramatically with their much more Marxist view of the world. And yes, if all this sounds unbelievable, you're correct.

That the same Church, who thanks to Pope John Paul was so very instrumental in bringing down the Iron Curtain across Eastern Europe, is now in the hands of a pontificate friendly to those very same enemies of Christ John Paul helped to defeat, is proof of just how insane things are right now. Rome has become a virtual haunt for pro-abortion, family-planning, pro-gay, international globalists who routinely show up at Vatican conferences and so forth.

Affairs of the world are of a much greater focus of this Vatican than anything specifically spiritual.

This papacy, in fact, has demonstrated an unbelievable willingness to inject itself into the American political process — really like no other papacy ever. In fact, a very sound case can be made that affairs of the world are of a much greater focus of this Vatican than anything else actually spiritual, and that focus entails the usurping of the Church's spiritual authority to advance an agenda which much more resembles socialism or Marxism than Catholicism.

It's no secret that a large number of U.S. bishops are supporters of the Party of Death and they use their authority to try and persuade Catholics to vote in a like manner. They dress up their political agenda as a spiritual one and, in so doing, they deceive generations of Catholics who have been poorly catechized by these very same men and their predecessors. Their work is to empty the Church's teaching of its content and substitute it with policy spin.

What is at play here is simple — two competing worldviews, an ideological war. That's it — a war over the understanding of man, his origin, his place in the world and his destiny. Those are pretty heady. In fact, they are the questions of existence itself.

There was a time when politics followed theology on these gigantic themes, but once Marxism and socialism started making staggered gains on various fronts, that evil ideology seized hold of the political system and started suppressing religion, and in the West, that meant Christianity — Catholicism specifically.

It has accomplished the near toppling of faith by a slow march, slow but relentless march through the cultural institutions, as their communist leaders had planned, as well as effectively executed.

And the little-talked-about reality is that this has been accomplished through agents of the Left from within the Church — agents who in the current climate are comfortable in coming out into the open, confident their cause is all but secured.

That's what's going on in the Church and politics. And it is vital Catholics understand this big picture. 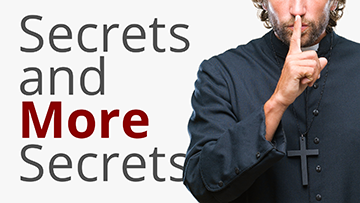 Secrets and More Secrets
Expose everything.