We are now in the less-than-a-hundred-days-to-go time frame until Election Day, and we can be certain, given the great spiritual combat being waged at this point in the nation's history, this will be Heaven's election, not ours.

This simply means that it will either be the final mercy on the nation or its final judgment. Beginning with the spiritual battle, what is happening in the nation's major cities with killings and rioting and violence — where sacred images have also been attacked — is all the result of a country that gave itself over to lust at the tempting of the Marxist-inspired sexual revolution.

It took a while to work its way through the nation's system, but eventually, the consequences of shattered families have finally become manifest. Youths — especially males with no guidance from authentic men — are devolving into brutes and are left completely defenseless in the face of a Marxist education system taken control of by the former hippies of the 1960s.

The free-love generation has proven to be anything but free. Likewise, their ridiculous anti-Vietnam War protest of "Make Love Not War" has proven to be completely backwards. It is precisely because they concentrated so much on unbridled sex that war has come to the streets.

However the election goes, the result will not be possible without God permitting it. It's always, in the end, a spiritual battle. The only force on earth capable of holding off and advancing on evil is the Catholic Church. Every other thing is man-made.

Man cannot battle and win against demons. It's not possible. Only through the Church and by the Church can evil be overcome — personally and collectively. So, if evil is advancing in the world, it means the Church is in full-blown retreat. And there is no doubt about that fact.

Speaking with various clergy from around the country, as we frequently do (many of them, in fact), it is clear that, among the faithful ones, there is a sense that the hierarchy has crossed some mysterious line and the Church cannot be turned around as long as many of these men are still in positions of authority.

Many of these wicked shepherds — past and present — are, in fact, directly responsible for the violence we see in the streets because they had the moral authority and spiritual power back in the day to choke this off at its source and did nothing. Only they could have prevented the dam from breaking, but they let it break. Even today, some of them continue to deliberately add water to the flood engulfing society.

There is a man running for president who claims to be Catholic yet is a disgrace to the Catholic faith. And the supposedly Catholic bishops sit silently in the face of this man and his murderous agenda. He kills children, supports contraception, officiates at homosexual "marriages," cavorts with communists, backs socialist and Marxist economic plans which will impoverish millions and is opposed to the protection of religious freedom.

A more anti-Catholic candidate you would be hard-pressed to imagine. And behind Joe Biden is an army of Marxists ready to let loose the scourge of full-blown Marxism on America. In truth, we've been approaching this tipping point for a number of decades now. All that remains to be seen is if the Marxists have been able to persuade 50% + 1% of Americans who vote that the country should become the "People's Socialist Republic of America."

Of course, the name "America" will eventually have to go because it refers to a white explorer (who was also Catholic). Given the near-total dominance the Marxists have now over both the media — and that includes Fox News — and the education system, it's hard to imagine that this will not be their moment.

If Heaven grants one more mercy, even if only for a faithful minority, it will be incumbent on that minority to do everything in its power to evangelize every soul possible, which of course will necessitate calling out the bishops for their evil.

Over the weekend, Fr. Frank Pavone — in a politely worded but nevertheless pull-no-punches public letter to the U.S. bishops — went after them for their hypocrisy in the political arena, hypocrisy which, for the record, stretches back decades. Their evil has been incremental, as evil almost always is, until it no longer needs to be.

Years ago, Nancy Pelosi should have been publicly excommunicated. So too Joe Biden, John Kerry, Ted Kennedy, Dick Durban, Tim Kaine and the whole lot of them — called out for the child-murdering heretics and apostates they are. But not only were they not, they were actually given places of honor by the Catholic establishment and its bishops.

Sacrilegious Holy Communion is common, almost as much as the silence — the sins of omission, which rise to the level of mortal sins when practiced by a bishop — and they create such scandal and surrender of faith.

Heck, even when statues of Catholic saints were being torn down, Bp. Barron had to be shamed all over social media into appearing at a prayer rally to defend a statue virtually in his backyard. At least shame had some effect on him. Others seem completely impervious to it.

Years ago, Nancy Pelosi should have been publicly excommunicated.

The reason the election is so important is that if the Marxists win, they will establish a more formal system for the persecution of the Church, or specifically the faithful in the Church. The bishops themselves, seeing how cooperative they have been, can probably expect a pay raise.

The USCCB, the U.S. bishops' conference, is little else than a rubber stamp for socialism disguised as Catholicism. It has been since its establishment back in 1966 by Detroit cardinal John Dearden, who quickly brought in homosexual satanist Joseph Bernardin to help him in his overthrow of orthodoxy.

The pair were very successful. That duo, coupled with Theodore McCarrick, essentially wiped out the Faith in the United States with its sidelining of doctrine and promotion of so-called social justice. The more social-justice minded the Church became, the more bishops surrendered the promotion of the Faith until what we have been left with is what we have now — bishops kneeling to Marxism and not God.

So yes, many clergy we speak with are wondering what Nov. 3 will bring — a final moment of mercy or a judgment that might be the only way to begin the purification of the hierarchy.

The Marxists, if they get in power, will leave the useful-idiot bishops around for a while, but eventually, they will discard them (as tyrants always dispose of those who helped them gain power).

That might be the only way to begin a restoration of the Church, in fact. Because it's clear to anyone with eyes to see that as long as the vast majority of these men are in authority, there will be no turn-around for the Church.

Leaders lacking supernatural faith can never aid the Church; they are, in fact, the sure route to its demise, as we can see all around us, even now.

When this gigantic struggle (the struggle between communism and Catholicism) in the United States was shaping up largely out of sight back in the middle decades of the 20th century, there really was a window where the Faith could have come to dominate the public square. Archbishop Fulton Sheen knew it. He used to rail against the commies because he realized the danger they posed to the family, the Church and the State.

He was gaining popularity at the same time Sen. Joe McCarthy was warning about communism in Washington and Hollywood. Both of them were spot on. By the early 1970s — maybe earlier — Bp. Sheen realized that the bishops were a lost cause, and so he made his famous comments about the laity needing to save the Church, not the bishops.

Perhaps he did not realize, at least fully, just how incompetent Catholics were when it came to the Faith, even then. The Catholic school system, and especially the Jesuit higher education apparatus (as well as Theodore Hesburgh at Notre Dame), were already well down the road in their plans to destabilize the Church by polluting the minds of future generations of Catholics, many of whom today hold important political offices as well as ecclesiastical ones.

There is much going on in this election. Everything is coming to a head — decades of efforts by Marxists, perversions by prelates of every rank and stripe. This one really is for all the marbles. Every single faithful Catholic has got to be all-in, and then whatever Heaven permits, we must cooperate with.

But since we don't know the outcome as we sit here 97 days out, and we cannot read the mind of God in this specific regard, then we are duty bound to fight against evil in the Church and the State to the best of our ability leading up to Nov. 3. We just don't know what form that fight will take after Nov. 3. 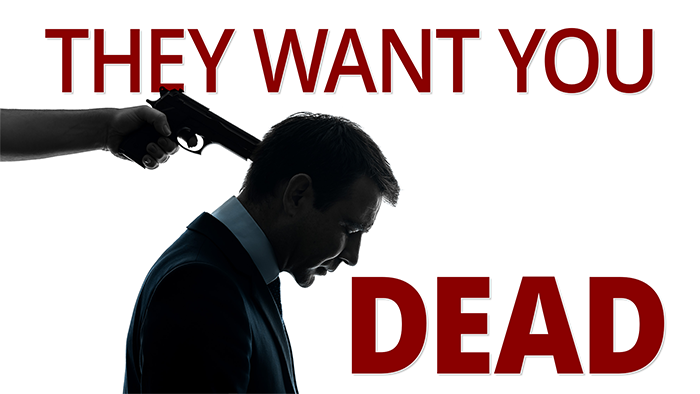 They Want You Dead
Bow to the State or die.