And there are many, many of them.

May 6, 2020  0
Podcast Available for Premium Subscribers

Last Thursday, an emergency video conference was held between Detroit archbishop Allen Vigneron and a couple hundred or so priests and deacons of his. Church Militant has obtained a copy of the conference video, where the topic of collapsing finances was center stage. And, importantly, Vigneron was emphatic that this information be withheld from the public, actually for good reason, sort of.

Jeff Wagoner, the archdiocesan chief financial officer as well as Vicar for Clergy Fr. Robert Spezia were both also on the call. Here is what they wanted to keep hidden:

Wagoner had just wrapped up a dry-numbers presentation and slipped in the desperate financial state the archdiocese of Detroit is now in, unable to pay its bills come August. He passed over it so nonchalantly that Fr. Spezia interrupted him and asked for clarification, and that's what you just saw.

The Wuhan pandemic is being blamed by the archdiocese for the money meltdown, as is the case with various dioceses around the country. But the truth is, the Wuhan is only bringing to light, by forcing the issue, that many dioceses are now getting by hand-to-mouth with their income and expenses. Even counting investment income, which has also taken a hit because of the stock market woes, dioceses all over the country are in dire straits now.

Vigneron has left enemies of the Church in place to run the local church, like many dioceses have done, and now the bill is coming due, and he can't pay it.

The bottom line is, there are not enough people going to Mass anymore and donating to keep the Church financially solvent. And the reason there are not enough people going to Mass is because bishops like Vigneron and his brothers around the nation, as well as their predecessors who ordained them and recommended them to be bishops, stopped preaching the authentic Faith. They made consort with the spirit of the age and now they are paying the price, literally. This is little else than the proverbial chickens coming home to roost. All the Wuhan pandemic did is force their hand sooner than they had expected.

That's quite an understatement. In addition to large cutbacks a few months ago, the hatchet came out yet again at the Detroit chancery. One of the casualties was long-time, formerly well-connected communications director Ned McGrath, a consummate liar and spinmeister regarding sex abuse cover-up and the prolonged activities of the homosexual group Dignity. He, like many in the chancery, sat atop a network of lying and petty politics with a thick veneer of homosexual clergy in various, key positions.

Detroit could be described, in fact, as the epicenter of the post-Vatican II pandemic — a petri dish back in the late 1960s for all the destruction that has gone on now up until this point. Cardinal John Dearden, who ordained Vigneron as one of his priests, began the American experiment of dismantling the liturgy under the guise of "liturgical reforms" — Communion in the hand, girl altar boys, facing the people, so-called eucharistic ministers, pop music passed off as "hymns," priest facing the people — all of it started right here in Detroit under Dearden and then it spread to the rest of the country.

Of course, his young priests like Vigneron ate it up, the so-called spirit of Vatican II. These men are married to that spirit. When Deardon died, the secular media hailed him as the great liberal Churchman, one of the few truths the Marxist media do report.

It was only a matter of time until the archdiocese reached this point — an archdiocese that has paid a ton of money, which it's running out of, to its attorneys to persecute Fr. Eduard Perrone; an archdiocese that has left clergy in key positions, like Msgr. Michael Bugarin, who led the charge against Perrone because Perrone is tradition-minded and Bugarin doesn't like that.

The archdiocese was once a shining star in the U.S. Church's constellation. But regional economic woes, coupled with the well-documented abandonment of the Faith, as well as woeful financial management for decades, has essentially sealed the fate of this archdiocese. Vigneron knows there won't be any coming back from this — not during his remaining three years. He has allowed much unfaithfulness to run wild among his clergy, which has corrupted the spiritual lives of his sheep and caused them to leave.

The non-stop appeal to protestant evangelization tactics like the ridiculous ALPHA program, the constant appeals for linking arms with Islam, the refusal until only very recently to bring an end to the shame of the Dignity group — started incidentally by one of his auxiliary bishops back in the 70s — all this and more has brought this archdiocese down to the dust.

Still, in the face of this great humbling, there's not a word of remorse, much less forgiveness for what has been allowed to go on here. No admission of wrongdoing has been offered, nothing.

At the end of the roughly hour-long video conference, Vigneron began to break down while praying the Memorare, and as sad and sympathetic an image as that might pose, what about reversing course on Fr. Perrone, just for starters? How crazy to appeal to the Queen of Heaven — for what? Should she step in and restore things to how they were before so that the persecution of good priests can continue and unfaithful men can be left in place?

What about sweeping clean the chancery and the halls of power who have done so much harm to the faithful — and that includes the poor formation of seminarians as well as a cover-up of pornography on the computer of a clergy-member faculty? What about all the priests he has left in place as pastors who tell parishioners contraception is okay, women need to be ordained, and homosexuality is acceptable, not to mention the priests he knows who are actively gay, or at least supportive of the lifestyle?

Vigneron has left enemies of the Church in place to run the local church, like many dioceses have done, and now the bill is coming due, and he can't pay it.

Many dioceses around the country are sitting on enormous investment portfolios — their endowments — running into the tens (and sometimes hundreds) of millions of dollars. They refuse to raid those to shore up their flagging income. Much of those investments were given by Catholics who have long since died, trusting that leaders in the Church would use the donations to further the mission of the Church. But while bishops were salivating over those investment portfolios growing, counting their shekels, they were ignoring the reason for their very existence — the salvation of souls.

Many dioceses around the country are sitting on enormous investment portfolios — their endowments — running into ... sometimes hundreds of millions of dollars. They refuse to raid those to shore up their flagging income.

The more they ignored and malformed the faithful, refused to stand up and defend the teachings of the Church, the more the faithful just walked out the door. The false ecumenism and horrible catechesis is now hitting the bottom line. There is not enough money coming in each month to keep the garbage barge afloat.

So, this coming August, it looks like Vigneron and his archdiocese will no longer be able to meet payroll, so they will have to go to a bank, put up some hefty collateral and take out a loan. That is the worst position any business can be in. Borrowing to meet payroll and essential services is a sure sign of financial collapse.

Businesses borrow money all the time for expansion and upgrades and so forth. That's normal, standard procedure, because there is an underlying assumption that the revenue streams will continue and even increase to pay off the loan. But borrowing to meet payroll and cover essential services — that is a sign that the end is near. That's why the archdiocese of Detroit didn't want this video conference getting out to the public.

And just so we're clear: On top of the spiritual carnage and collapse that began decades ago, the financial collapse now coming into focus has all been brought to you by the heresy of modernism, and all those chickens are now heading home.

The only way out of this for Vigneron and the rest of the bishops is to do a deep self-examination of their own complicity in the destruction of the Faith, make a public confession and do an about-face immediately. They need to admit they have neglected the faithful — do their best to wipe the slate clean and begin anew.

And yes, it will probably have the effect of making the Church smaller, announcing the fullness of truth. But who are they kidding here? It's already getting smaller. This strategy would just be honest. 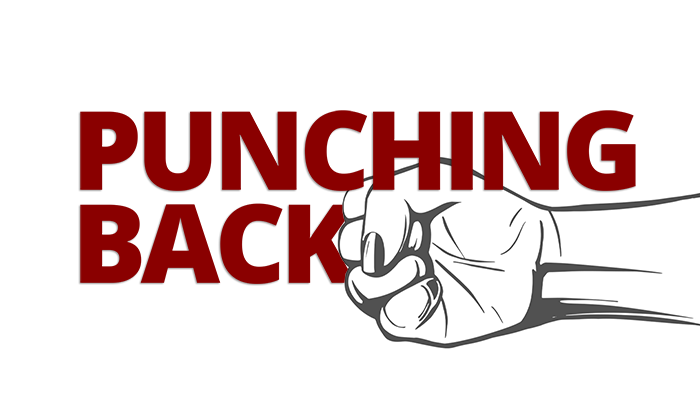 Punching Back
And it better be really hard.