In case you haven't noticed, last century's enemy of the Catholic Church is beginning to make significant headway in American politics — so much so, in fact, that President Trump had to throw down the gauntlet in his State of the Union address.

However, despite the president's challenge, the truth is that aspects of socialism have already crept into American life — the proverbial camel's nose under the tent. The problem with socialism, beyond purely economic considerations, is the underlying philosophy: a reliance on the state to run the day-to-day lives of citizens.

Despite its glossy brochure claims that wealth is shared by all members of society — thus the name "socialism" — the reality is that power becomes concentrated in the hands of a few.

While it's true we have a degree of that now, perhaps even a high degree, there still exists some independence and autonomy in the hands of citizens.

If wingnuts like Bernie Sanders or Ocasio-Cortez had their way, the massive wealth redistribution that would occur would be the greatest transfer of wealth and control in the history of the world.

The political slogans of "Free Health Care for All," "Free College Tuition for All," "Guaranteed Income for All" are appealing to a crowd of people who want to live on government handouts. On a spiritual plane, the clash between Catholicism and socialism comes in the view of man.

Catholicism sees each man as a self-determinant, a free agent who can cooperate or refuse to cooperate with grace to move toward his supernatural end: the Beatific Vision.

Socialism sees each man as a unit of the state where his individuality — particularly with regard to his final end — doesn't matter. On a political level, it's a clash between Church and state, but politics should be the least concern of faithful Catholics as they watch the creeping socialism movement.

Ultimately, there's not enough room in the culture for both Church and socialism, and since socialism will eventually resort to violence to enforce its will, that spells persecution for Catholics and other Christians of good will.

The Church has roundly condemned socialism since it first reared its ugly head in the 19th century. And what is happening is that many Catholics are not seeing that the Democratic Party is shifting to embrace socialism.

True, there is an internecine war within the rank and file of the party of infanticide, but all the rage and fury is on the side of the socialists within the party. The old guard, the baby socialists, are now being attacked by the natural consequences of their own politics for the past 40 years — which brings us to Catholic bishops and clergy, many of whom have long been and voted Democrats.

It's curious that while popes have decried the intrinsic evil of socialism — one pope (Benedict) having grown up in its shadow and another (John Paul II) having spent decades living under not one, but two socialist states, Nazis and Communists — bishops are remaining curiously silent as socialism gains more and more traction.

U.S. citizens are being hoodwinked by clever slogans from the mouths of hypocritical politicians, and some of those citizens are their sheep — unsuspecting Catholics who have been lulled into a social justice mentality for years by liberal clergy with their own non-Catholic agenda.

In political terms, that's a glass half full, half empty scenario.

Various polls show that support for socialism has remained pretty flat over the past 10–15 years, but that was then. The nation's elite are dyed-in-the-wool socialists, and they are determined to overthrow a cultural view where the individual matters more than the state.

For example, fake Native American Elizabeth Warren is talking up what amounts to mandatory child care, placing children in government-run daycare facilities so Mom can go out and work.

Socialism is little else than slouching toward communism, a pet project of Hollywood elites (Jane Fonda) for decades now, and given the recent revelations of just how deeply communism penetrated into the Catholic Church beginning in the early part of the last century, it's not altogether clear that the Church is prepared to counter the lurch toward socialism.

In fact, it's not safe to assume that Catholic leaders in the United States are even intellectually equipped to understand the growing threat. The socialist agenda had already been unleashed in the nation's seminaries years before most of the current generation of senior bishops even pondered a vocation.

That's why so many of them have embraced the agenda of social justice warriors, and that's been the case for decades. The concern is not that the nation will suddenly wake up socialist. Rather, it's that the slow boil is on, enough so that the president of the United States had to stand in the well of the U.S. House and declare America will not become a socialist state.

It's one of the major reasons the globalist effort to push the world to a socialist model has turned so violent against Trump. It's one of the little-discussed themes playing in the background of this presidency until the president called it out, something he repeated at the annual CPAC gathering last week.

Politics, as they say, is always downstream of the culture, and the fact that there are now firmly ensconced pockets of socialism on the political landscape means that socialists are finding a way to push their agenda even if, at this moment, it doesn't enjoy a majority.

Socialism leads to government tyranny — always does — and among the first casualties of a socialist state is the Catholic Church. Catholics had better be paying attention to all this — very close attention. The longer socialism as a concept is allowed to remain unchallenged, the more it will seem less and less of a threat.

Creeping socialism is coming after us because Catholics are the natural enemies of a system which denies the ultimate grounding of natural law. 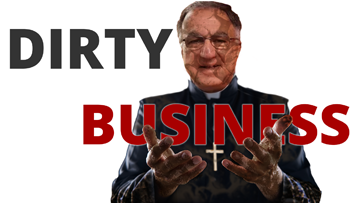 Dirty Business
And the constant digging gets dirtier and dirtier.