This is why the establishment doesn't want you listening to Church Militant.

More and more, we are getting phone calls and emails from Catholics around the country who are saying things like, "My priest told us from the pulpit to not watch anything on Church Militant."

One seminarian told us that while he was applying, the vocations director asked him, "So what do you think of Church Militant?"

Another faithful Catholic said he went into the sacristy after Mass and asked his priest about comments he made about "divisive" websites and wanted to know what he was referring to. "Church Militant" was his response.

We've been made aware for some time that most of the establishment hates what we reveal about them. Tough.

Some people require an overabundance of proof to be swayed. Fair enough. Let's go.

Stop denigrating the Faith and victimizing innocent souls and bodies, and we'll happily return to our first mission here, which was helping instruct people about the glories of the Church — the one true Faith — which is made nearly impossible because of the corrupt hierarchy, who think they are some kind of medieval monarchs.

For example, here in Detroit (home to the beginning of the corruption in the Church in the United States, thanks to Cdl. John Dearden, who ordained the current corrupt archbishop, Vigneron), His Excellency wrote a letter to the faithful a few weeks ago saying we need to speak the truth in social media and various Catholic news outlets and do so in charity.

This is from a man who has made a career protecting homosexual clergy and workers in his chancery, allowed false reports about solid faithful clergy to be disseminated to secular media and who keeps prolific homosexuals in his employ until they are outed by Church Militant.

It's beyond galling that he would even consider thinking that he is beyond reproach and should not be questioned and then turn around and condemn those among the faithful who want accountability from him for destroying faithful priests.

Practice what you preach, Abp. Vigneron. But then you'd have to resign. The only thing more frightening than the knowledge that you have two more years to go here is that Cupich will be pulling the strings when it comes to your replacement. Buckle in, faithful Catholics. Vigneron's scheming and wheeling and dealing will look like child's play in comparison with what's coming.

We say all this to say that the corrupt bishops are feeling the heat and have now launched a war to discredit Church Militant and our reporting. They have tons of resources to do so — from paid chancery personnel who have to toe the party line or get fired, to those who get paychecks and believe the bishop is a good man because he's so nice.

Nothing will ever convince some people of the truth of anything. Even Our Lord said that if someone were to come back from the dead, they would not believe.

So, yes, some people are beyond admitting the truth and dealing with it because there's something in them deeply disturbed. That will have to be left to God. However, there are plenty of other people who are not willfully ignorant, or at least not as much so, who, when presented with absolute proof, will admit they were wrong and join the cause.

It's why Church Militant does what we do by way of video, audio, document dumps, loads and loads of background vetting and so forth. Some people require an overabundance of proof to be swayed. Fair enough. Let's go.

For years now, Church Militant has been warning not only of the obvious dangers to the Faith and stability of the Church because of James Martin and the homosexual cabal of cardinals and archbishops, but also the other crowd, the subtle destroyers of the Faith whom most people pass over because this crowd is much more sneaky.

A case in point is Cdl. Timothy Dolan of New York, who is as corrupt and lying as they come. But his constant appearances on Fox News help him to self-promote as a voice of reason and moderation in the Church, all while undermining all sorts of things.

So in chasing him down — and considering the pass that many are willing to give him — we knew we would need the proof. Well, we have it. We have secret audiotapes where his own personnel come right out and admit the cover-up Dolan lied about regarding one of the most notorious cases of homosexuality in the priesthood.

On multiple occasions, the cardinal archbishop stood in front of New York media outlets and lied through his teeth about a cover-up he knew was going on, claiming there was no evidence and that no one had come forward. He also lied about the extent of his own privately ordered investigation and his promise to release the findings.

Church Militant has been working on this case for over five years, compiling everything possible to expose this corrupt, lying leader in the Church, and now we have it and are ready to release the proof, the smoking gun.

Immediately following tonight's Church Militant Evening News, which airs live at 6:30 p.m. ET, we will be releasing the biggest bombshell report on a member of the hierarchy ever produced: secret recordings from his own investigators who admit the cover-up and its scope.

They didn't know Church Militant has the recordings — but they do now. So we invite you to tune in tonight at 6:30 p.m. ET for our Evening News, followed immediately by our Church Militant Spotlight: Cdl. Dolan Exposed.

But please don't think Dolan is some lone outlier. He's just part of a much larger network of corrupt men in robes, some homosexual, others covering it all up and all of them in the network of liars and cheats. Judas had nothing on these men.

Church Militant is completely dedicated to exposing this rot (which has been a hundred years in the making — not just since Vatican II) and inspiring you to take action.

On the point of exposing, this is why we gathered various priests in the studio last month to have them tell you their stories about how this corrupt network has maligned them.

This week, we gathered a group of former seminarians who can tell you about the rampant homosexuality and doctrinal corruption they either experienced or saw firsthand while they were in formation. We'll be releasing that in the next day or so.

As far as taking action, this is why Church Militant is organizing the “Bishops: Enough Is Enough” rally on Nov. 16, 2021 (to coincide with the USCCB meeting in Baltimore), where the likes of Steve Bannon, Milo Yiannopoulos and Stephen Brady will let loose about this corruption and the need to expose it and bring it to an end.

We want 3,000 faithful Catholics from across the country to show up at this and make their voices heard. Please click here for details.

These men and their corruption actually deprive souls of truth, peace and justice. They must be stopped.

The Church has undergone various moments in Her life where corrupt men have seized power and attacked the Church from within, but this time in Her 2,000-year history may be the worst of all. That means a larger response and action are required of actual believers, a total dedication to expose the filth and demand action.

Think of what has happened to Fr. James Altman, who will also be at the “Enough Is Enough” rally. All he did was call out the evil of voting for abortion while still pretending to be Catholic and then slam the hierarchy for its willingness to shut the churches and deny the sacraments. He gets ripped by his bishop, but the child molesters, thieves, active homosexuals and so forth in collars and miters get a free pass, reassigned, promoted even.

No one is more sorry that it has come to this than us at Church Militant. This was never the intent of this apostolate. But these men and their corruption actually deprive souls of truth, peace and justice. They must be stopped.

That's why you have to get involved, do whatever you can and keep doing it because the Church and souls are worth the fight, grueling as it may be.

This corruption is more than a century old, and it isn’t going to change in a short amount of time. Please click here and come to Baltimore, and tune into Church Militant Evening News every night — but especially tonight to hear the proof with your own ears. This is why the establishment doesn't want you listening to Church Militant. 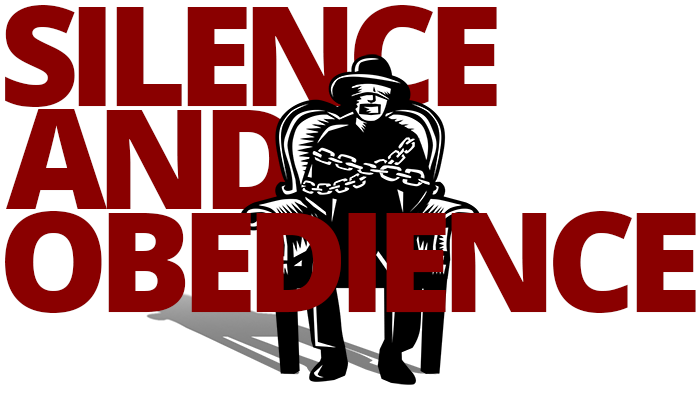 Silence and Obedience
Enough is enough.