The community has been here since 1989 and is dedicated to living a humble life of prayer as well as action.

The founder of the original community in 1949 was Jesuit priest Fr. Leonard Feeney who defended the Catholic dogma Extra Ecclesiam Nulla Salus — "outside the Church there is no salvation.”

His community was called Slaves of the Immaculate Heart of Mary.

In the years immediately following World War II, a great movement for interfaith cooperation and false ecumenism began taking hold in the West, and the Catholic dogma about the necessity of the Catholic Church for salvation became something of an embarrassment for a number of senior Churchmen.

Despite the centuries and centuries of saints, doctors and fathers of the Church proclaiming this dogma, as well as the Church magisterially defining it, men like Boston's Cdl. Richard Cushing denied it, publicly calling it "nonsense."

Father Feeney was in Boston, and his preaching of this dogma earned him the dislike of men like Cushing despite the fact that his style and directness was used by Our Lord to bring a large number of converts into the Church.

He would, for example, often times preach publicly in Harvard Square, and many young students converted.

Like so many people who preach the unvarnished truth of the Faith, Fr. Feeney has gotten some bad press, not only in his own day but also after his death.

Various reports accused him, and still do accuse him, of heresy and then being subsequently excommunicated for it. The problem with those charges is there's not a word of truth to them.

Although he had been informed there were charges to respond to, officials in Rome refused to notify him in writing what they were. He had a right to receive written notice.

Being the firebrand personality, he refused to go to Rome with his right to due process being violated, so he was excommunicated — but excommunicated for that.

Feeney ran afoul of the spirit of the age which various Catholic leaders were willing to embrace — a false ecumenism, a laying aside of the hard truths. And he ran afoul of the leaders as well who were gunning for him.

And, for the record, Feeney did not die excommunicated — far from it.

In 1972, six years before his death, he was asked to recite the Athanasian Creed, which he did three times in Greek, from memory, which contains within it the very doctrine of "no salvation outside the Church."

He was never asked to recant his position of there being no salvation outside the Church, because his position was in complete and total accord with the dogmatic teaching of the Church. In fact, a bishop even offered his very public requiem funeral Mass.

The background on Fr. Feeney is important to understand in light of a current controversy developing with the St. Benedict Center here in Richmond, New Hampshire where, again, the question of heresy is being brought up — again by Church officials.

After years of cordial relationships with the diocese of Manchester, suddenly things went south, and once again, the legacy of Fr. Feeney is being called into question as suggestions are made once again that his followers are not loyal sons of the Church.

And the heat is being turned up on the community — the story on all that in the next Vortex episode.

Coming to you from the St. Benedict Center in New Hampshire, this is Michael Voris for Church Militant. 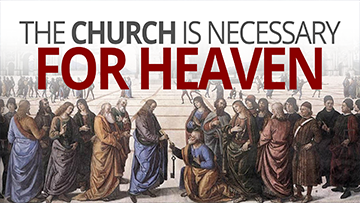 The Church Is Necessary for Heaven
No question about it.