And no one cares.

This Vortex comes to you from the archdiocese of Los Angeles, where unsurprisingly there is a heretical priest on the loose. I know it's shocking, but it's the truth. And as an aside, consider your reaction to hearing that piece of news. A priest, an alter Christus, preaching against Church teaching, actively opposing divine revelation through the Magisterium of the Church, and we sort of have almost no response. That's how bad it's gotten.

This particular priest is in the limelight because the University of Notre Dame, all the way back in South Bend, Indiana, has decided to give this priest its highest honor at next month's commencement ceremonies. Father Gregory Boyle, SJ from here in Los Angeles will be awarded the University's Laetare Medal.

Father Boyle has established a relatively well-known operation called Homeboy Industries, where care and counseling is provided for gang members and prisoners and so forth. To the extent that his work has helped men in a good way temporally, good for him. But in his spiritual work, which is what he was sort of ordained for, the priest is a disaster and a heretic.

He supports every moral evil in the realm of sexuality one could name. Additionally, he is a supporter of women being ordained to the priesthood. He supports same-sex marriage and even went so far as to publicly say on repeated occasions that Catholic clergy who are opposed to same-sex marriage and support the Church's dogmatic teaching are on the "wrong side of God." And of course, when it comes to sacrilegious Holy Communion for divorced and remarried, Fr. Boyle whips out the pom-poms and helps lead the cheers.

Boyle, who is shockingly a Jesuit, has been featured on CBS News' 60 Minutes and is a media darling, applauded by the likes of Martin Sheen and members of the Kennedy clan. He was even inducted into the California Hall of Fame a few years back, all of this making him seemingly untouchable. And situations like this are the very ones that bishops hate because they would have to walk the plank if they said something against him.

Archbishop Jose Gomez of Los Angeles doesn't exercise as much control over Fr. Boyle as he does, for instance, one of his own diocesan priests, but he isn't completely powerless, either. He could place a call to Boyle's superiors letting him know to put Fr. Boyle in check. He could come out publicly and denounce Boyle's repeated attacks against the Church's teachings — his heresy, in short.

But this is a spotlight case of what bishops will not do or feel they cannot do— challenge the prevailing culture of rebellion in the Church — and in refusing to act, they are acting. They are allowing this kind of evil dissent and heresy to continue unchecked, not even confronting it. And even if something has gone on in the background privately (and that's an if), it isn't having any kind of effect out in public where it counts.

Too many bishops have been trained and formed to avoid conflict, at least open conflict, at any cost, unless of course they are dealing with Catholics who actually do believe the Faith and submit to the Church's authority and teachings. Those Catholics can be denounced and marginalized as much as a bishop or his staff wants to. They can be labeled as divisive and disobedient.

It is precisely because of the never-ending case of this treason and heresy in the Church — completely ignored by bishops who look the other way as a career —that so many Catholic laity have struck out on their own and have begun flooding into Traditional Latin Masses or at least looking for the least offensive usual parish they can find.

They have started and helped support by the tens of thousands outfits like ours here at Church Militant as well as others. They have started their own independent schools and colleges or resorted to home schooling because they have no desire to expose the souls of their children to the evil of heresy and the inauthentic faith that so many clergy and bishops seem to not give a rip about.

Faithful Catholics have become reactionary Catholics because they have needed to, in the face of an almost-entire, episcopate-wide falling down and collapse. Sensing that they are losing any kind of relevancy, large swaths of U.S. bishops have run at breakneck speed to join every humanist cause they can find and baptize it: immigration, climate change, gay rights, poverty and anything else that socialists propose. But they are mistaken if they think this is making them relevant. It is not. They are doing little else but bringing up the rear in the long parade of those who oppose the Church.

Whenever the anti-Church crowd can temporarily find them useful, they will use them, and the bishops will allow themselves to be used in exchange for worldly admiration, but they will sacrifice their office for that fleeting notoriety.

Los Angeles has become the largest archdiocese in the United States with close to five million Catholics, many of whom know next to nothing about the Faith because their clergy has succeeded in shifting their attention away from God and onto man. So it is altogether fitting that a Jesuit priest from here —celebrated by secularists and their media — would be awarded the highest honor Notre Dame could give because Notre Dame itself has fallen completely in lockstep with that same heretical agenda.

Bishops around the nation are approaching the point where they are going to have to decide which side of the chasm they will stand on — a chasm which cannot be crossed once a side is chosen. The Church is in de facto schism, and this pretended allegiance to "holding it together" has grown tiresome to hear.

Pray that bishops very quickly develop a spine and the intestinal fortitude needed to save their sheeps' souls before their bodies. We all know the truth of this whole situation. Why are we pretending this is about anything rather than what it's really about?

Either you are with Christ and His Mystical Body, or you are just pretending to be. 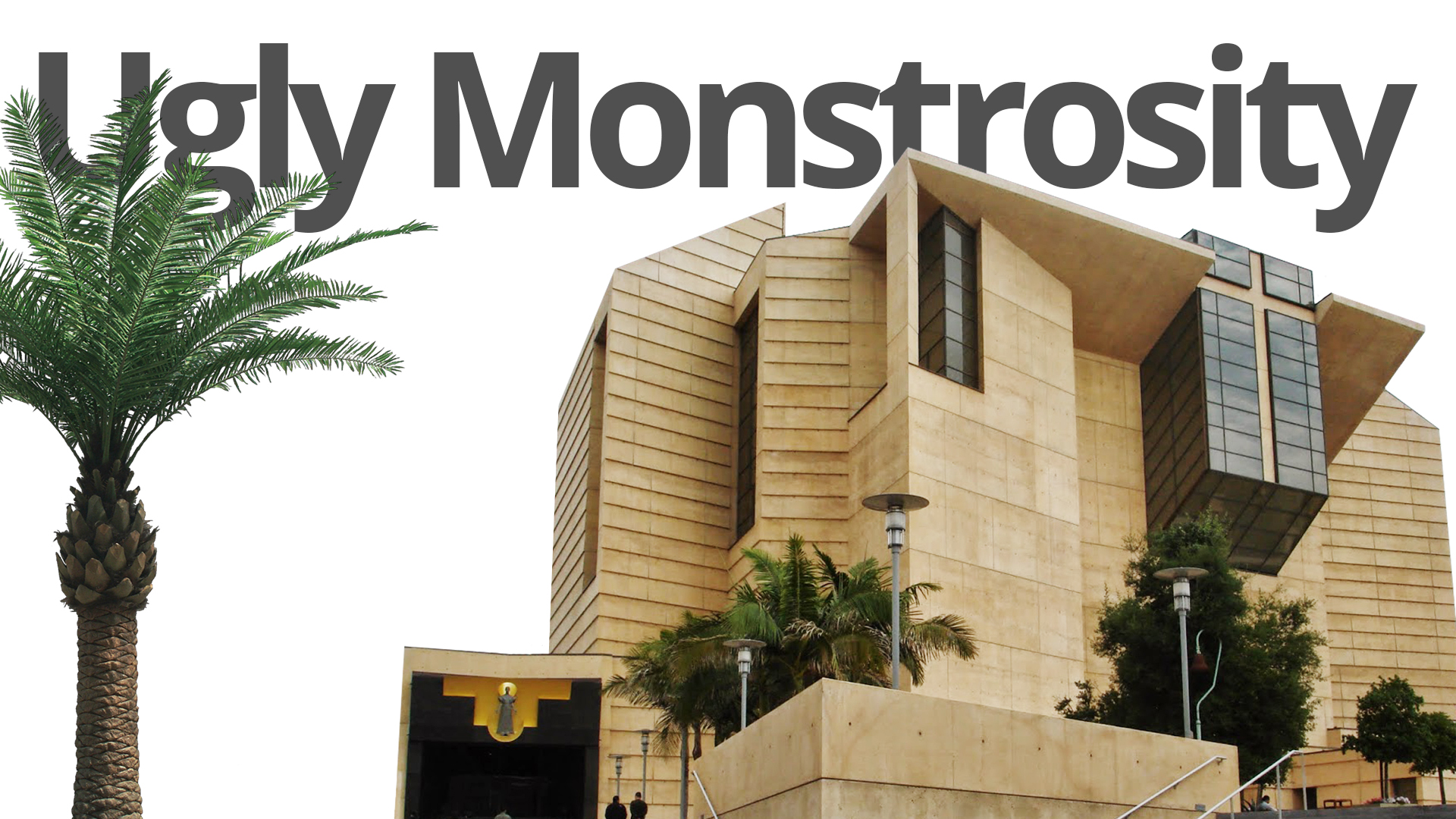 Ugly Monstrosity
A cathedral inspired by the fallen angels.