He’s At It Again

And he needs to stop.

Bishop Barron's ridiculous pushing of essentially "Everyone goes to Heaven" nonsense is like a broken record, and as long as he pushes it, we are gonna push back, because he's wrong. No, we don't have a reasonable hope everyone is saved — our Blessed Lord Himself says so.

Has the bishop never read Matthew's Gospel about the end of the world where almighty God Himself says some portion of humanity will go off to eternal damnation? And it's a fair bet to say that portion is not some meager one or two percent.

Here's what Bishop "Reasonable Hope" said last week in an email to adoring fans on the question of how many will be saved:

We have remained, understandably enough, fascinated with these issues and questions for a long time. But the official answer of the Church is that we don't know. We are clearly warned about the real possibility of damnation. We do indeed know that there are many in Heaven, for the saints are formally declared to be so. But there are no anti-saints in the Church; there is no one whom the Church has formally declared to be a denizen of Hell. Therefore, without succumbing for a moment to anything-goes presumption, we are permitted to hope that all people might be saved. Indeed, St. Paul writes to Timothy: "God wants all people to be saved and to come to the knowledge of the truth."

Where did this cleric get his theological training? His logic is just missing. His "argument" — such as it is — jumps around. He raises side issues and addresses them as though they are the issue. For example, when he maintains the official answer of the Church is we don't know. We don't know what, Bishop? Exactly what is it we don't know? How many will be damned or if anyone will be damned?

Correct, we don't know how many will be damned — or saved, for that fact — but we certainly do know that some will be. Again, God said so directly, explicitly and beyond some kooky interpretation. There are humans in Hell — period.

As to there being no one individual person in Hell — Bishop, meet Judas. Christ Himself said in one passage that Judas is lost, recounting His discourse with the Father at the Last Supper.

"When I was with them [the Apostles] I protected them in your name that you gave me, and I guarded them, and none of them was lost except the son of destruction, in order that the scripture might be fulfilled." That's from the Holy Spirit through St. John.

"The Son of Man indeed goes, as it is written of him, but woe to that man by whom the Son of Man is betrayed. It would be better for that man if he had never been born." That's from the Holy Spirit through St. Matthew.

And for the record, remember that Matthew and John were eyewitnesses to all that at the Last Supper. So, while the Church has never officially declared that any one individual is in Hell, Jesus Christ has. Following the lead of Her Master, as She is bound to do, She has incorporated into Her solemn Holy Thursday liturgy the following:

"O God, from whom Judas received the punishment for his guilt and the thief the reward of his confession."

None of this is looking good for Judas, Bishop. So, we know for certain — because God said so — that Judas is in Hell. So, immediately, no, we do not have a reasonable hope that all men are saved because of two reasons.

One, there is one by name we know is damned, and two, we know others unnamed will be damned — again from St. Matthew. And as to the proportion, well, the only reference we have in Scripture is again from the lips of Our Blessed Lord Himself: few vs. many, narrow vs. wide.

So, this constant stream of nonsense from Bp. Barron stands in direct defiance of Sacred Scripture as well as the entire tradition of the saints, doctors, fathers, mystics, visionaries, councils and just about every other concrete thing you can touch in the Church for the past 2,000 years.

His passive will is part of His active will. He actively wills that each man who possesses free will exercise it — and men do. Some choose eternal life, others choose eternal damnation — many in fact, as opposed to few, according to Him who is outside of time.

So, in a phrase, Bishop, knock it off. End this namby-pamby line of malarkey that only confuses people and is actually spiritual poison because it creates the impression that all are saved. Your arguments are not only weak, they are illogical and defy the Church.

You need to stop this drum pounding now. Admit you are wrong, have misled many — as opposed to few — and get in line with what Church Tradition has presented for 2,000 years.

Why do you keep up this nonsense? And please don't retreat behind the liberal tactic of saying Church Militant is "mean."

It is you who are being uncharitable by not speaking the fullness of the Truth. 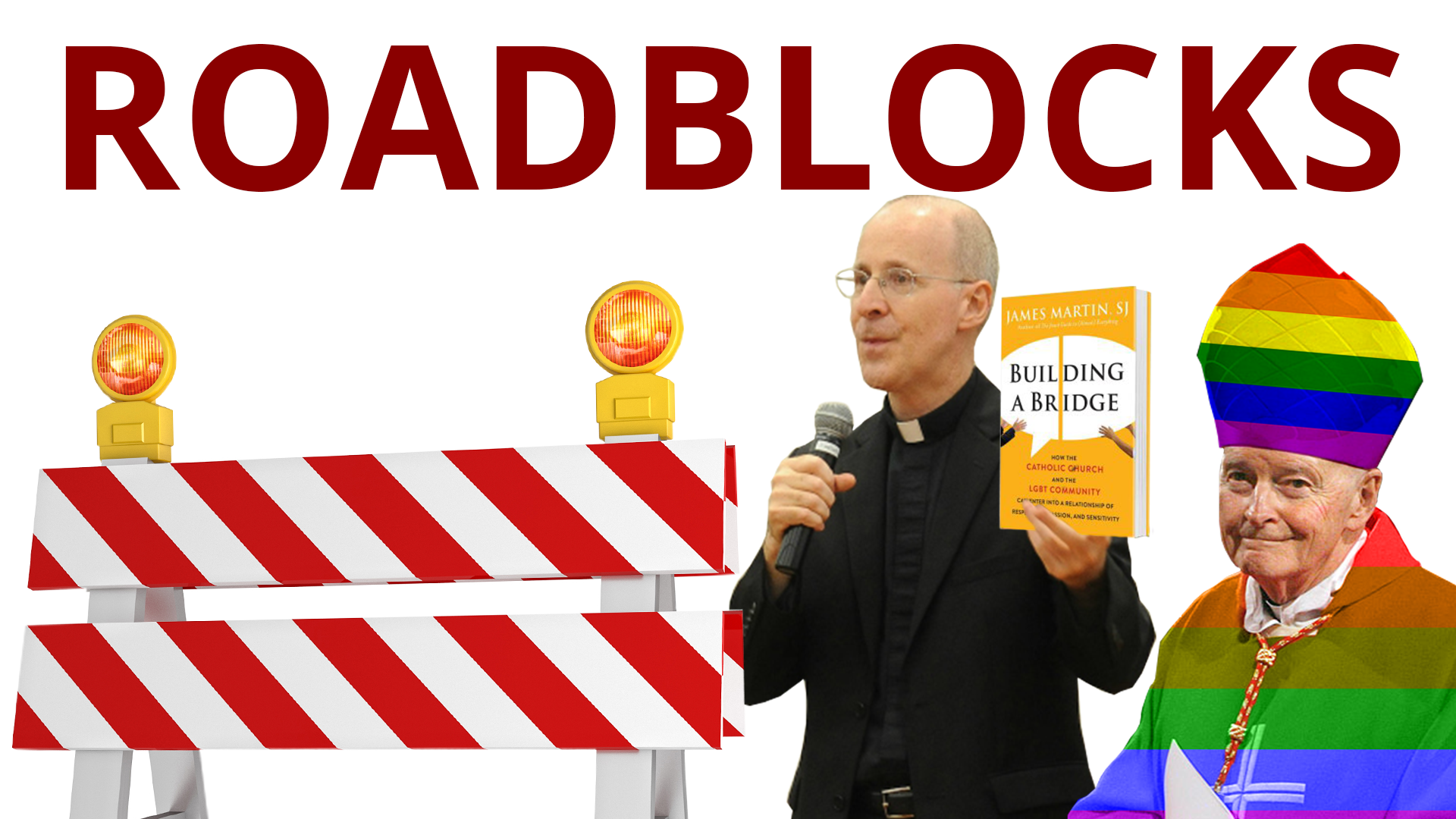 Roadblocks
They must be removed.