There are huge numbers of homosexual men in the Catholic priesthood. This is the case for a number of historical reasons, which we won't get into in this Vortex because that's not the topic. But what we will address, which is the topic, is how the presence of many of these men is destroying the authentic faith.

First, the more obvious cases — that the overwhelming majority of child-sex abuse cases are committed by homosexual priests. We all know about this situation sadly. But then there are the other criminal cases not involving minors like the case of Fr. Robert DeLand in the diocese of Saginaw, Michigan, a case which is erupting into a national scandal owing to the criminal charges and a recently filed civil suit against not just DeLand but also the diocese and Bp. Joseph Cistone, accused of knowing about and covering up evidence in the case. But all of that, narrowly speaking, is criminal. But not all homosexual priests are either child abusers or brought up on charges of sexual assault by adult males.

Many others lead double lives and have gay lovers on the side or have them employed in the parish and not a few have a separate residence or house where they live with their partner in sodomy. So, far from the criminal reality, spiritually speaking, things are much worse and so bad, in fact, that many in the Church just don't want this cancer of homo-heresy spoken of. In fact, the Church of Nice establishment is well aware of all this and turns downright ugly whenever it's talked about — probably owing to the fact that various members of that establishment are active homosexuals themselves or at the very least supportive of it.

What this is spawning is a presentation of the faith so distorted that a whole new "religion" is being manufactured right in front of our eyes or better stated — a brand new heresy, neatly accommodated to our specific time in history just as previous heresies did. Call it the heresy of Homo-Arianism. Homosexual and homosexualist priests and their supporters in the hierarchy and the establishment know that you cannot hold together the idea that Jesus Christ is divine and that sodomy is a moral good, a blessing from God. So, they play up the nonsense of "acceptance and mercy for homosexuality" and downplay the divinity of Christ.

There is no better presenter of this in the Catholic world today than Jesuit homosexualist James Martin. He has vomited his heresy all over his social media platforms, making ridiculous claims about Our Blessed Lord. For example, Jesus had to learn about his mission from the Syrophoenician woman, indicating, of course, an absence in Christ of understanding He was divine. That "mission" was to redeem mankind through His Passion and death and open the path to salvation for us. Pretty darn sure the Syrophonecian woman didn't help him come to that understanding.

Recently, on a CNN interview, which by the way, the fake news network is the perfect forum for him to spew his fake theology, on that he whined about a series of his talks being canceled. Um, no it wasn't about Jesus but Fr. Martin' Jesus — two completely different Christs. Father Martin's Christ didn't quite understand who He was, approved of sodomy and also rebuked and insulted His Mother when He said to her, "Woman." That last little nugget coming from one of his other writings.

Of course, Martin styles opposition to his heresy as hatred against people who have same-sex attraction and live accordingly because at the end of the day ad hominem attacks are all he has because he will not discuss this on theological terms because he is incapable of doing so because his theology is warped. No, Father, it isn't about homophobia, it's about grave sin which you won't admit because you have reservations about and error in your Christology.

Father Martin can't really believe that Jesus Christ is divine (that's the Arianism) because he believes that his Jesus supports the grave sin of sodomy (that's the "homo" part), hence Homo-Arianism. But he's not alone in his Homo-Arianism. Don't allow yourselves to be fooled. There are many, many priests and bishops who are Homo-Arians. Their heresy is what must be confronted not the silliness of a fake thing called homophobia. 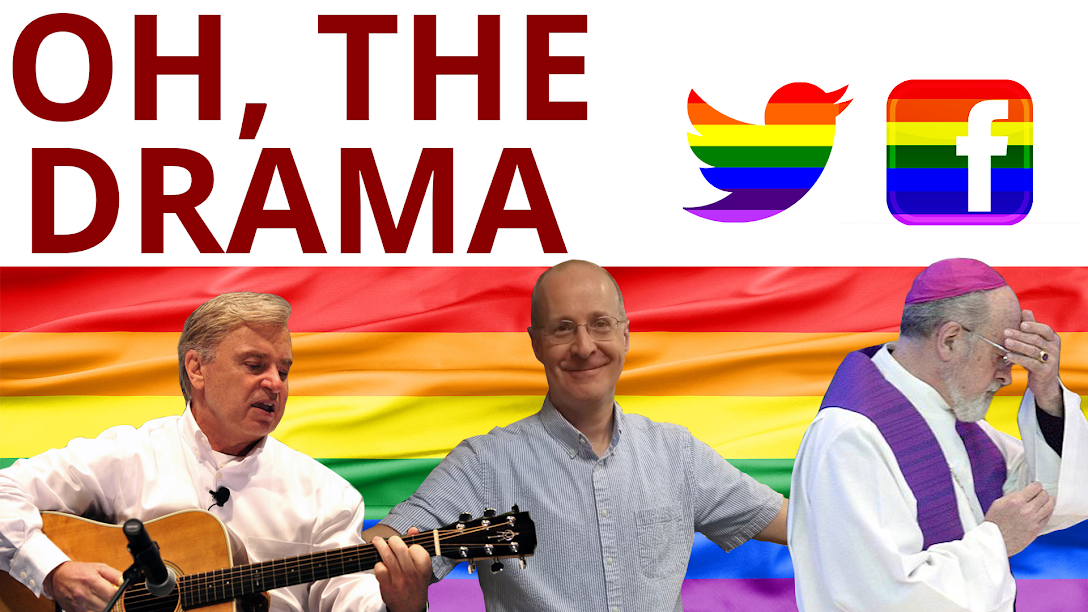 Oh, the Drama
Homosexual clergy can't live without it.