That's exactly what it is.

It's pretty clear right now that a good number of cardinals and archbishops in the U.S. hierarchy are more than a little shell-shocked from the fallout of the "Uncle Ted" McCarrick explosion. Just two weeks ago, the liberal plan to continue deconstructing the Catholic Church in America was humming along just fine — and then all of a sudden: boom!

The fallout from what are now hundreds of articles and stories exploding on an almost daily basis, not to mention the outrage being expressed by zillions of Catholics on social media, has finally brought the spotlight on the nefarious schemes of this notorious bunch. People are starting to connect dots that just two weeks ago, they didn't even know existed.

One of those dots is just how rampant homosexuality is in the priesthood, and not just confined to priests, but bishops and cardinals, and how others cardinals and bishops have covered up all of this up for decades. The lies, hypocrisy, blackmail, the filth, the abuse, sexual abuse, financial abuse, abuse of sacred authority by sick men is almost unbelievable.

What's being totally exposed is what we could simply term: The Network. And once you see things through this prism, you wonder how you didn't see it all along. The Network is a cooperative on various levels of pro-homo communist-minded clerics all swimming in the same cesspool. There may be some in that cesspool who are there somewhat naively but given recent revelations, not many.

When Joseph Stalin gave orders in the 1920s for Catholic seminaries to be infiltrated by young communist agents with — his words — "neither faith nor morals," it was homosexuals who did the infiltrating. This intelligence was passed along by Communist Party USA member Bella Dodd, selected to do the actual recruiting and placement of these homo-communist infiltrators. Dodd came clean on her part in the plot once she converted to Catholicism in the 1950s.

Once these agents worked their way into the system, and some of them advanced, they slowly began introducing little notions here and there meant to sew doubt in the minds of Catholics about Church teaching. This was told to Church Militant by Dr. Alice von Hildebrand who, along with her husband Dietrich von Hildebrand, became very good friends with Dodd, who told them all about the seminary plot.

Little by little, these men became ordained and moved up the ladder, introducing various heretical ideas under the guise of new philosophies or theological approaches, but many of them were also homosexual, practicing homosexuals, who, once they reached a certain level, began recruiting other homosexuals into the seminaries. And not only were other homosexuals recruited, but good men were blocked from getting in or eventually getting ordained.

A decided shift began in how the Church approached poverty, for example. In centuries gone by, religious orders were jammed to the rafters with people who wanted to give their life's work to helping the poor or teaching. But suddenly in the 1960s, at the same time the Church's teaching was being replaced with revolutionary notions, a massive push in the area of so-called social justice exploded onto the scene, with many of the same professed goals as Marxist communism.

Today, the so-called Catholic social justice movement is barely distinguishable, at least in principle, from The Communist Manifesto. Saul Alinsky found willing allies in some influential members of the Chicago Catholic clergy beginning after World War II, right about the same time the original homo-commie agents would have started coming into their own in positions of authority in the Church. For the next roughly twenty years, these men increased in stature and influence as well as planned for and recruited the next generation of young seminarians — many of them homosexual — who could take over once they had died.

So the timeline plays out like this: For roughly 20 years, the 1920s and 1930s, 1,100 homo-communist agents infiltrate U.S. Catholic seminaries. In the 1940s and 1950s some number of them, at varying rates, gain strong footholds and positions of influence at various levels of leadership and begin affecting change in theological arenas as well as new "approaches" to the Church's social teachings. In the 1960s and 1970s, as they were in their 60s and 70s, they ensure that the new crop of seminarians is very much like them — homosexual and social activist, with an emphasis on socialism.

This new group, not necessarily communist agents themselves like the original group is, nonetheless, imbued with these socialist ideals as well as homosexual or at least willing to turn a blind eye to it. They are poorly formed in the Faith, embracing of so-called social justice and homosexualist in their outlook. That last sentence describes almost perfectly the situation in the American hierarchy as a collective body today.

Even Pope Benedict said that many of today's bishops are poorly formed in the Faith and the laity was going to have to suffer through this — we are. So look at what we have today — a hierarchy embracing virtually the entire socialist political agenda, embracing of practically anything gay and working feverishly to destroy or supplant tradition at every turn.

They work in concert with each other, even appearing in the same talk show formats to smilingly spread their propaganda with the assistance of other men just as committed to the homosexual, communist agenda as they are. And the aim of that agenda is to destroy the Church from within, and being honest, they have done a mighty fine job. What they did not count on was the ability of the laity — through technology — to expose them and their evil.

This has been going on for decades — active homosexual bishops and cardinals who are predators. But they were able to pretty much keep the lid on all this because the technology was not in place to bring it all into focus at the same time. Same with the social justice aspect of The Network. They could work their plans in relative silence because of how far-flung they were and difficult to connect for the average layman.

So in every area of Church life — liturgy, devotions, religious orders, universities, theological training, art and architecture, it doesn't matter, you name it — The Network has almost completely wiped it out and replaced it with a substitute.

The effeminacy of a huge number of priests today has been widely commented on. The horrible catechesis, the false ecumenism, the billions in government handouts, all of it has completely reshaped the Church, right in accord with Stalin's original plan a little less than a hundred years ago.

The aim of the plan was to first, remove the Church as an obstacle to world domination by socialists — meaning communists — and second, to co-opt its institutions and personnel to help bring the revolution about. But their evil has caught up with them. They are being exposed as depraved homosexuals hiding in robes, with no faith and no morals, who hate the Church and Her morality and Her Natural Law clarity.

And while McCarrick fits the bill completely, a man with no faith and no morals, deeply involved in the socialist Catholic Relief Services business, pushed non-stop by the nation's bishops, he is not alone among senior members of the U.S. hierarchy. He just got caught and exposed.

All of this is nothing less than a homosexual communist clerical cesspool, and if there was ever a swamp in need of draining, this is it! 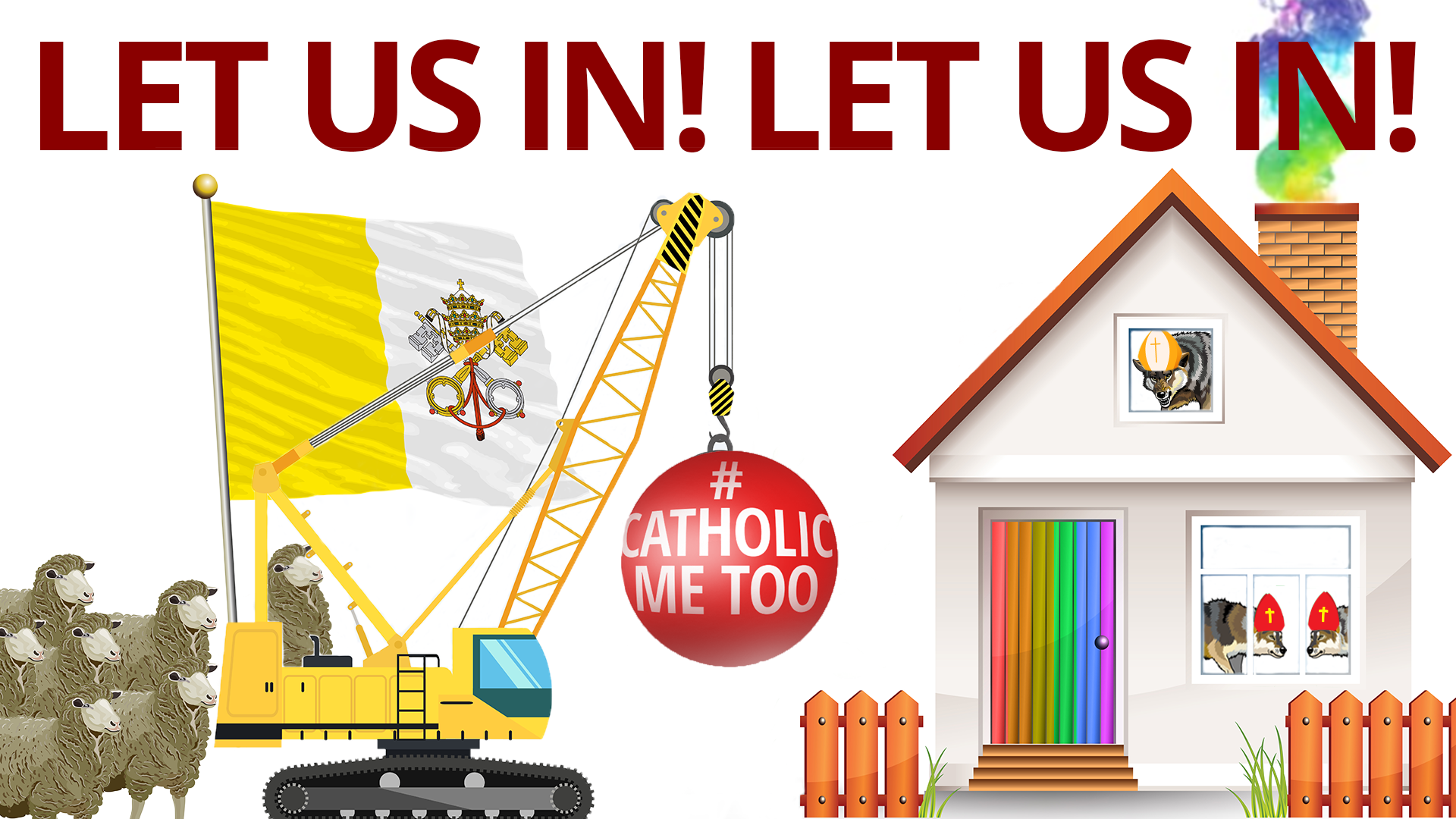 Let Us In! Let Us In!
Cuz we got somethin' to say.