Honey Pots — NOT the Truth

But the 'honey' is poison.

May 7, 2019  0
Podcast Available for Premium Subscribers

Following up from yesterday's Vortex about a secular media report here in Michigan on the demographic disaster that has befallen the Church here in Detroit — indeed, in most places around the country — we quoted Detroit Abp. Allen Vigneron's plan to "[meet] people where they are at and avoiding 'truth bombs' that will only turn them away."

As a quick aside, if you'd like to read the entire article — which we highly recommend — just click on the provided link.

It's clear to anyone with a functioning cortex that Vigneron's plan — which he and his chancery named "Unleash the Gospel" — is a wrong diagnosis of the root problem, not to mention too little, too late.

The Church in Detroit is in a massive decline in this collapse is due directly to a half century of not teaching the Faith.

In the article, some Catholics are highlighted; one in particular who is 65 years old and says her one son is gay and has left the Faith, as well as her other son whose children he and his wife never bothered to baptize.

This woman says her elderly father is devoutly and steadfastly Catholic, and there you have it, in one neat package, the generational decline. Elderly grandfather is a staunch believer, child-of-the-60s daughter thinks the Church needs to be more friendly and get with the times, her adult children have walked away and their children will know nothing of the Faith —

four generations, with the only faithful one among them close to death.

And so it goes for the Church in the United States — dismal, Detroit dismal, disaster in Detroit dismal — that is repeated in hundreds of dioceses all over the country.

Leaders in the Church back in the hippy years conditioned Catholics to stop focusing on Heaven and salvation and sin and damnation and getting holy and start focusing on being hip and cool and with it.

It was the age of Godspell, of Jesus Christ Superstar, of guitar-and-tambourine hootenannies for Sunday parish Mass.

Thousands of emasculated men were ordained, many homosexual, and many, many of them active, some of them even sexually abused teenage boys by the thousands.

And this is an interesting point to pause on here as we examine this futile effort by Detroit's archbishop to resurrect his dying archdiocese by appealing to people's emotions instead of their intellects.

Last summer — the "Summer of Shame" — when the news broke about not just McCarrick's homopredation but the massive involvement and cover-up and lies of so many Churchmen in enabling him, one of Vigneron's most-trusted advisors, Msgr. Michael Bugarin, went on a local radio program and flat out denied any of the problem was related to homosexuality in the clergy.

That's very telling because, in so doing, he was carrying the water for Vigneron — this directly contradicting Abp. Viganò's testimony that in fact it was and is a homosexual current in the hierarchy and the clergy, of which he named many names.

Additionally, Pope Benedict himself last month added to the correct narrative of gay clergy saying publicly in a bombshell letter, "In various seminaries, homosexual cliques were established, which acted more or less openly and significantly changed the climate in the seminaries."

Now perhaps Msgr. Bugarin and Abp. Vigneron want to deny this truth — too much of a "truth bomb" — because they know one of the seminaries Benedict was talking about was the one right here in the archdiocese of Detroit, which pumped out truckloads of homosexual priests, some of whom were ordained while Vigneron was rector of the seminary.

Curious what either of the two men would say now about the whole homosexual question, especially Abp. Vigneron who finds himself in the uncomfortable position of denying what a former papal ambassador has asserted as well as the charge made public by the very man who, as pope, appointed him archbishop here in Detroit.

Anyone in Detroit, a little suggestion, when you next see either Msgr. Bugarin and/or Abp. Vigneron, ask them if they think Viganò and Pope Benedict are wrong and they are right.

Vigneron's entire plan to bring old hippies back into the Church centers on making parishes nice and friendly, but as he said in his "Unleash the Gospel" marketing plan — which, by the way, he's now using to try and rake in more than $200 million — truth bombs must be avoided.

The news article quotes another priest close to the archbishop who says, "We need to help the next generation know why it's important to stay in the church."

And how, pray tell, does he intend to pull that off without exposing them to those pesky "truth bombs."

Why is it important to stay in the Church? Simple — so you are not damned. But the problem is that so much time has gone by where that has never been discussed that now it sounds like a fairy tale or medieval.

But that doesn't excuse from the duty to teach it. It must be taught.

Let's say some people come back because they like guitars, and elderly women "passing out the bread," and older guys in bright blazers shaking their hands at the door as they come in.

Let's just say the plan works and some find all that somehow appealing. What next? There immediately comes the problem that either that returnee needs to be told from the pulpit not to approach for Holy Communion or the priest participates in sacrilege.

Well, there's quite the option; offend the returning hippy and chase him away, again, or offend God.

Men like Vigneron, and many other bishops, can't be relied on to fix the problem because they caused the problem; perhaps innocently, perhaps on purpose, but the fact stands. They have no vision because it's clouded over by decades of poor formation, an ample amount of "bishoping" and their own insecurities.

The truth is the "honey pots" they want to hold out as an enticement for old hippies to come back, or young people to come in, in the end, are not Catholic.

They fail to understand the foundational issue, perhaps in part because they helped construct it, the vast majority of baptized Catholics are not Catholic in their minds, their intellects and certainly not in their wills.

They don't believe, oftentimes because they haven't been taught, and now, the only avenue most bishops have, they think, is to appeal to people's emotions with sappy music and "lively liturgies" and more watered-down teaching — in short, honey pots in place of truth bombs.

It is terribly sad to watch a generation of bishops in the United States passing off the scene, trying to solve the problem they helped to create by resorting to the very things that caused the disaster in the first place — no fool like an old fool.

They have lost three generations, most of whom are gone for good. The Church is much, much smaller than it appears to be — another Pope Benedict instruction.

That is the foundational reality that needs to be dealt with, and since their bishops will not tell them, younger priests need to take this lesson to heart. When you are preaching in your own parish, most in the pews have been conditioned by the bishop to reject what you are saying, your own sheep.

You must preach the truth bombs anyway. People of good will, as the angels sang over Bethlehem, will respond correctly to those truth bombs. The ones who walk away, leave to God. 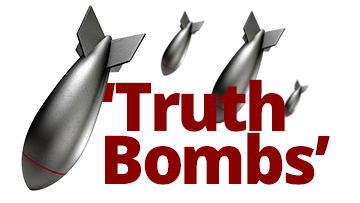