How About a Simple Yes or No?

That’s all anyone is asking.

I'm Michael Voris coming to you from Vatican City, where trying to get a straight answer from the right people is nearly as difficult as getting to Heaven.

Archbishop Viganò himself is now publicly stating that the Pope must personally deny the reports of Eugenio Scalfari claiming the Pope said Jesus was not divine when He was on earth.

The Vatican Press Office has denied it in a roundabout way when its earlier statement was seen as insufficient — forcing the follow-up.

So now, it's come down to a question of: Who do you believe, the Vatican or Scalfari?

Since Rome has a very deft way of never allowing clarifying follow-up questions or getting specific and detailed, that latest statement raises another question.

How does the Vatican Press Office know Pope Francis didn't say what Scalfari said he said?

To have any certitude in making any such formal declaration — certitude, which, granted, is in short supply in Rome these days, one would presume they went straight to the horse's mouth.

Any good journalist worth his weight in experience would immediately ask, did the Holy Father tell you that personally and directly?

If he did, then why aren't you screaming that from the rooftops? The statement should not be, "The Pope never said those things."

The statement should be, "The Holy Father himself, personally and directly denies he ever made any such claims. And His Holiness re-affirms he believes that Jesus is now God and was God when he was present here on earth 2,000 years ago. Jesus has been at all times fully human and fully divine."

And it is the Pope himself who should make it, and the cries for him to make that statement are increasing on social media.

That statement puts this whole episode to rest immediately. So why not just issue that statement? There's only two reasons; One, it wouldn't be true; or two, it is true, but they just don't want to say it in such stark terms because the knock-on effect for the precious ecumenism agenda would be disastrous.

While the underlying supposition of everyone who covers the Vatican is that Rome believes Jesus is God, it's actually something that just plays ever so quietly in the background.

It's like the wallpaper. No one notices. No one draws attention to it. But this entire apparatus — the building, St. Peter's, the Curia, the bureaucracy — rests entirely in that single truth, that Jesus Christ is divine and always was.

That's why the refusal to just come out and say that, while denying what Scalfari insists the Pope said is just so mysterious.

But imagine a press statement read aloud in the press office saying the Pope declares that Jesus Christ is fully human and fully divine and has been at all times.

The next question would be, well, may I ask how that impacts relations with Islam, which denies that?

Or, the ticking bomb of all questions, well, if that's true, wouldn't that mean that the Catholic Church was founded by God Himself and is, therefore, the only legitimate religion?

Those kinds of discussions simply cannot be allowed to break out in Rome because they would cause panic across the world as leaders scrambled to respond.

The New York Times would have in giant font, "Catholic Church Claims Itself Only Legit Religion."

That truth of the Faith, as well as Jesus being God, is something various members of the hierarchy have been trying to hush up for decades.

That's why everyone in Rome reaches for their antacid pills whenever the bothersome issue of the actual Faith comes up here.

Want to ramble on about integral-ecumenical-ecclesiological-eco-theology? The floor is all yours. But the Faith itself? Nope, too hot to handle.

In 2000, the Congregation for the Doctrine of the Faith — the CDF — under Cdl. Joseph Ratzinger issued the declaration Dominus Jesus, a strong assertion about the identity of Our Lord and the Catholic Church.

While largely aimed at non-Christians, it had the effect of angering not only non-Christians but also Protestants and liberal Catholics because of its clear language re-asserting Catholic truth.

The CDF considered the document was necessary to put straight certain misperceptions arising from the world, that all religions were pretty much the same.

That the modernist Catholic crowd was all upset with the document says all you need to know. "Catholic Exceptionalism" is not high on their list. In fact, they don't believe it at all.

And given the trajectory of this papacy, the Vatican bureaucracy finds itself in a bind, trying to navigate between a faithful crowd growing larger and more vocal about the need to reassert orthodox Catholicism and a papacy trying to steer clear of it.

It's interesting watching the assembled journalists in the Holy See press hall. Some of them are little else than sheer apologists for Pope Francis, steering clear of asking pressing questions.

Imagine if President Trump was reported to have made some incredible claim about an urgent constitutional matter?

The White House press corps would be peppering a thousand questions about why He Himself does not come out and deny the spurious claims.

But here in Rome, as long as some reporters feel Pope Francis is on their ideological wavelength, they cover for him.

And, the overriding issue, doesn't the Vatican or specifically the Holy Father feel a duty to the sheep, his sons and daughters to simply jettison all doubt in their minds about what he believes?

He speaks freely for hours on his plane trips with reporters. Can he not spare 30 seconds for his hurting children?

One clear, precise statement; that's all anyone is asking.

Coming to you from Vatican City. 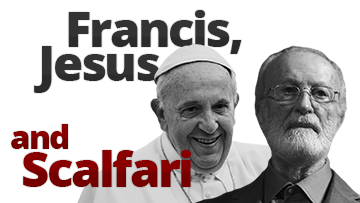