It’s tearing us apart — and that’s a good thing!

It's a phrase never really before heard in the American cultural lexicon until recently: identity politics. It means that people's politics are now explicitly ordered around their own personal identities. So abortion, same-sex marriage, so-called social justice issues become the center of being, the reason for existence for millions of Americans, tens of millions, and the political process is used to force these views on the culture. What can't be done legislatively is accomplished judicially, but each avenue is owing to identity politics.

So many Americans have wrapped themselves up in sexual immorality that their sin has become their identity, the center of their beings. It's only natural, then, that their politics would flow from their self-identities. What this has done is create a political climate of division between those who understand that the purpose of politics is for the promotion of the general welfare, like it says in the Constitution, and those who don't care about the general welfare but about getting absolution for their immorality by making their sins legal.

So we now have a political climate where the losers of the last election — the Party of Death (which, by the way, is establishing quite the losing record in all these special elections) — will do anything, including shooting lawmakers, to force their evils on you. The leftist media, to try and cover their tracks, keeps highlighting how bad all this political division is. We need to all "come together" and "be American" and blah blah blah. Well, we beg to differ with the self-anointed social deities of the Left. Division is good.

Division points out the differences between good and evil, between moral and immoral, ultimately between Heaven and Hell — the greatest difference possible. This same division is present in the Church these days, and that's a good thing. Mind you, the simple fact that there is division is not good in itself. But when division serves the purpose of separating good from evil, orthodoxy from heterodoxy, then it's a good.

Even Our Blessed Lord spoke very clearly. We know that clarity is not welcome in the Church of Nice, but tough. Even Our Lord spoke in no uncertain terms that the Catholic faith would divide people, even in families. "I have not come to bring peace, but the sword." But the Church of Nice leadership doesn't like division, despite the fact that they are the ones who have created the climate that has caused the division.

Neither the Church of Nice leadership nor the political Left, which share a lot of the same goal — neither of them like division. They are always decrying division. We are openly called "divisive" by all kinds of folks in the Church. And yes, we are, in so far as we point to and shine a spotlight on the existing division.

So imagine their great disdain for upstart outfits and individuals who start calling them out and pointing out that what they are advancing is illegal or immoral. For example, the Left loves abortion, elevating it to near-sacramental status. And theological lefties, while maybe not supporting it directly, essentially fall silent on it and downplay it. Then along come faithful Catholics who start the pro-life movement, and they are labeled "divisive" by the Church leadership who oftentimes shun them. Because they are divisive, they get no national collection by the U.S. bishops.

And it doesn't matter what problem you point out; the minute you mention a spiritual danger, you are blasted. There is an identity politics of sorts going on in the Church right now. Call it identity theology. If you are a hip and cool prelate or cleric and support the whole gay thing, and Holy Communion for practically anyone, and think that excommunicated heretic Martin Luther was down with it, then you are in the theological elite.

But if you object to these things because the Church objects to them, because they reject divine revelation, then you are a divider and not helpful and don't speak with charity and don't have a nice tone and every other denunciation that can be heaped on your head. As long as there is no division, no challenge to the Establishment, which has betrayed the authentic faith, then they get their way.

They don't like it, therefore, when you challenge them. And to be certain, to challenge them does create division, because a gulf needs to be opened up to show the difference between authentic Catholicism and this protestanized garbage being passed off as the Faith.

Identity theology all boils down to remaining or not remaining faithful to Our Blessed Lord and His Holy Bride. Given the great evils that have emerged in the Establishment Church these past 50 years, division is a not just a good thing but a great thing. Never forget, there will be one final division, and it will be everlasting, one great and dominant separation that will be visible for the entire race of man.

When the Son of Man comes in His glory, and all the angels with Him, He will sit upon His glorious throne, and all the nations will be assembled before Him. And He will separate them one from another, as a shepherd separates the sheep from the goats. He will place the sheep on his right and the goats on his left. Then the king will say to those on his right, Come, you who are blessed by my Father. Inherit the kingdom prepared for you from the foundation of the world. Then He will say to those on His left, Depart from Me, you accursed, into the eternal fire prepared for the devil and his angels. And these will go off to eternal punishment, but the righteous to eternal life.  (Matt. 25:31) 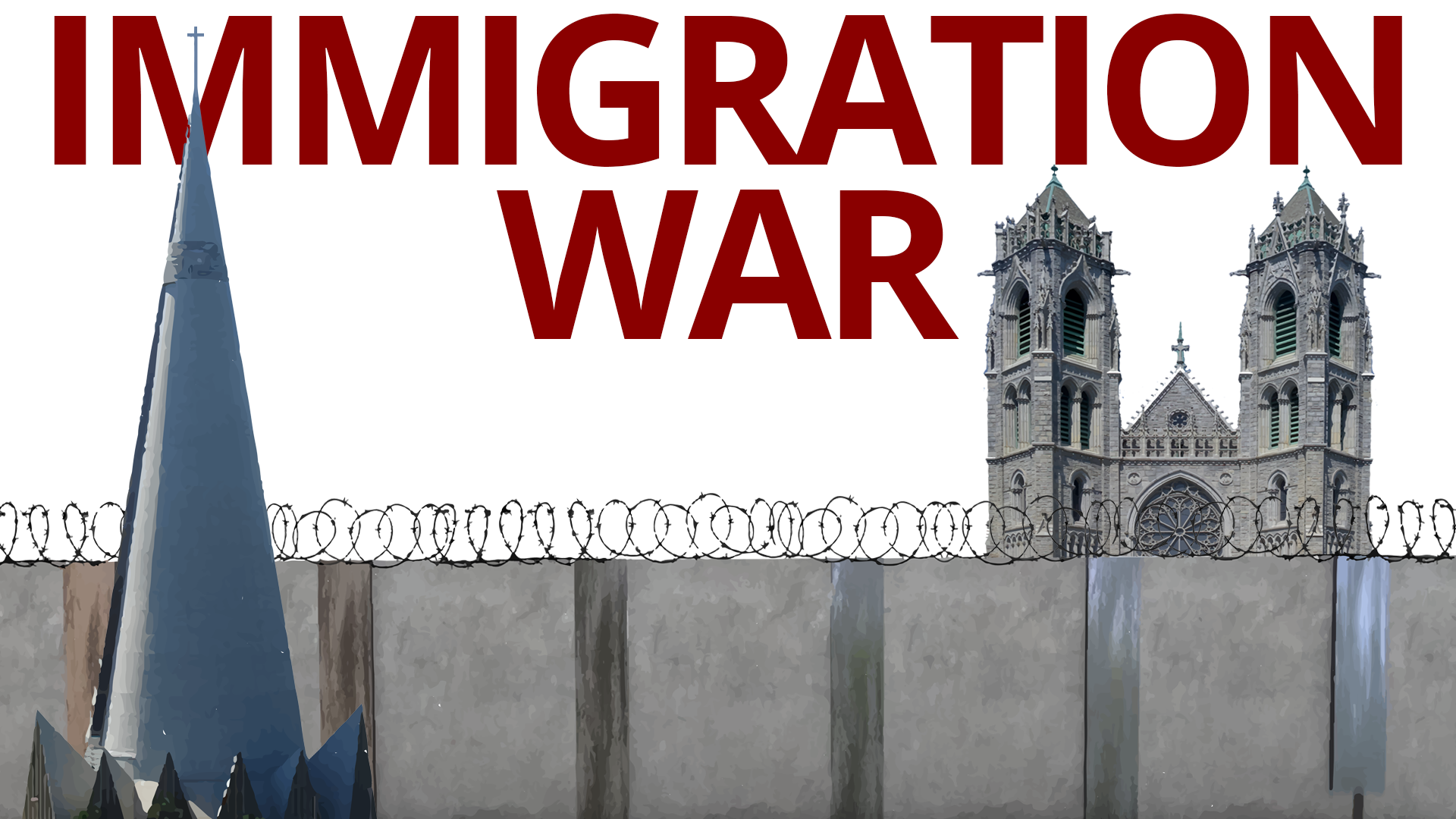 Immigration War
The U.S. hierarchy has it so wrong.