It's a smokescreen for worldly bishops.

The Catholic bishops of America, taken as a whole, are approaching a new low — even for them. This whole "holier than thou" approach to the immigration issue is sickening. They go on and on about children and their safety — about defending children.

Has everyone forgotten that many of these same men were complicit in the gay priest sexual abuse crisis just a few years ago? They didn't seem to care so much when altar boys were being raped by their gay priests, so if there is any crowd in the country that should learn silence when it is appropriate, it would be this gang.

Sit down bishops — you don't get to speak when it comes to talking about protecting children. You gave up your voice on that issue when you ordained and still continue to ordain gay men who sexually assault boys — it's called pederasty — at a rate ten times greater than their presence in the society at large.

And this includes Cdl. Cupich, whose predecessor, Cdl. George, confessed privately that over a third of his priests in Chicago are homosexual. The same Cdl. Cupich who, this week, actually canceled all the weekday Masses at parishes in his diocese and ordered his priests to come and be brainwashed on how to get money out of the faithful and listen to the ramblings of another pro-sodomy bishop, the infamous Robert McElroy of San Diego.

Yep, you can see how money and sex are more important than the sacrifice of the Mass.

And, on that point, they have been for decades. A little pro-life nod of the head here or there, some scraps from the table, but then onto the really important issues of climate change. The hypocrisy is so open, so over the top, that it is disgusting.

No Catholic is bound in conscience to follow these men or pay the slightest bit of attention to what they say, as long as they continue to obscure Church teaching with their own political agendas. Ignore the bishops. They are hypocritical. They want your money, you old Catholics, before you die. And they want you to vote for Democrats who hand them enormous sums of money to advance their social justice agenda, something Trump has caught on to and is eliminating. No wonder they don't like him — actually hate him.

No Catholic in good conscience should be giving to the bishops' annual collections or special fundraising campaigns — not a single penny. These men are politically liberal, and note their record for proof of that — silent on abortion and pro-gay rights, because many of them are gay.

They are heterodox, or dissidents or opposed to anything that smacks of traditional Catholicism — from the Latin Mass, to traditional devotions, to authentic teaching of the Faith, substituting it instead with ALPHA Protestant garbage and rock-n-roll liturgies.

They have become massively political. Their goal is to win back the Catholic vote for whoever the Democratic nominee will be in 2020, even a Joe Biden-type person, a pro-abortion Catholic. They are a disgrace to their office and no Catholic is bound in conscience to follow them on any of these matters. They have departed from an authentic transmission of the Faith, something they should be quaking in their boots about, terrified that they may not wake up when they go to bed tonight.

Instead, their lust for money and embrace of homosexual relations has neutered them, or perhaps spayed might be more appropriate, given their silence on sodomy. They are doing their best to capitalize on the immigration crisis just like their buddies over at Democratic Party HQ are doing. They don't really want a solution, they want the problem because the problem allows them a preaching stage from which to attack Trump, who has cut funding for them.

Their cozy, financially profitable deal with the Obama-type crowd has been disrupted — their swamp is being drained — and they will fight like Hell to restore the status quo. They, collectively, are an evil bunch who are the worst kind of evil, using the things of God to promote the things of Satan.

They will not address the continual decades-long now sacrilege of notorious public sinners receiving the Body and Blood of Our Lord. Yet, they will threaten faithful Catholics with that very same penalty over immigration — miserable hypocrites, unfaithful shepherds.

How do you sleep at night? And why do you suppose "good" bishops hold your tongues on all this? Do you not think that you will escape the wrath of God at your judgments? Your brothers commit the sin of commission, but you assist them by your sins of omission — both are damnable. You go on and on about a Culture of Life, and yet when the first real moment in American politics arrives in decades to actually advance it, you fall silent.

Are you all going to rush to the microphone in support if and when Trump nominates a pro-life Supreme Court replacement for Ruth Bader Ginsburg or Anthony Kennedy? Of course you won't, because you either have no supernatural faith or so little that you will rationalize your inaction.

You all go on about a Catholic moral duty over the immigration issue, which is not an intrinsic evil, but sit on your miters whenever abortion comes up, because you have been trained well by your Democratic Party puppet masters to keep your mouths shut on that issue.

Your silence about or cooperation with the evils of this day will be your everlasting regret as demons bring added tortures to you in Hell, precisely because you were successors of the Apostles. What a prize for the demons, what a smack in the face of God.

You need to repent — publicly — while you still have time. Repent of the abuse of your offices and the great confusion you have sown among the faithful. Give up your homosexuality. Give up the special protections you afford your gay priests and brother bishops. Give up your lust of money and power and influence and relevance. Your single concern should be souls, which you never speak of.

As for all Catholics, no matter who they are, the only issue that matters is souls — your own first of all.

But for bishops especially who laid this mission aside, the pains of Hell for you will be worst of all because the demons will take their greatest perversity in torturing you. 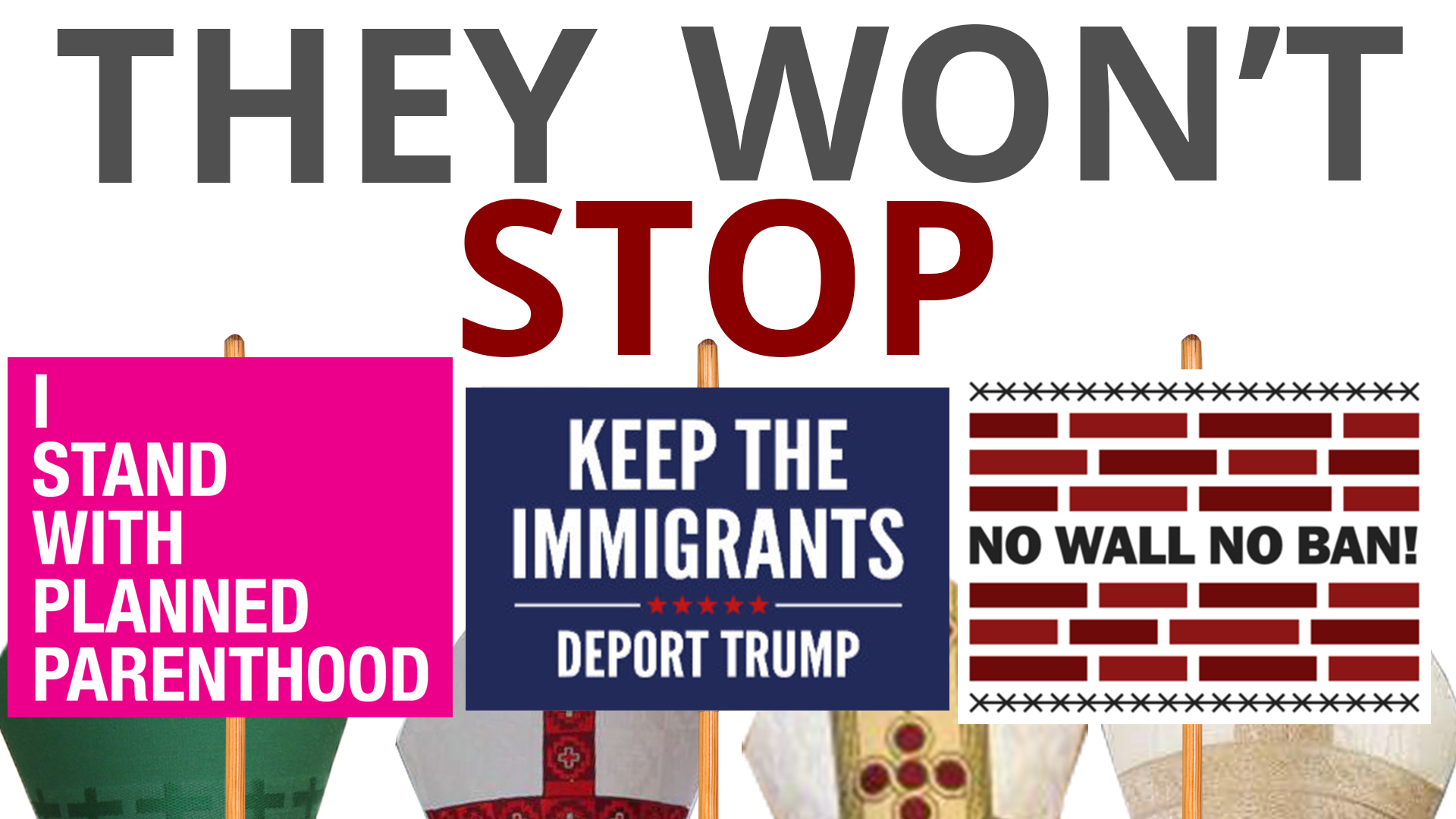 They Won’t Stop
And someone needs to tell them to.