Happy Birthday to Our Blessed Mother this Thursday, Sept. 8, the day Holy Mother Church sets aside to mark her birthday. Happy Birthday, Mommy.

There is a common attitude among many notable Catholic clergy members — the ones on YouTube and other social media platforms — that they must "soft-pedal" Catholic teaching, as though Catholic teaching was just one belief among many. The problem is that when you present your case in terms of it being your belief, it means absolutely nothing. Everyone has his own belief or opinion. So if I disagree with your opinion, who cares?

This attitude has been adopted by Catholic priests, especially those on social media, who seem to believe the best way to announce the truth is to be as absolutely inoffensive as possible and never confront anyone.

If no one told the celebrity clergy members who are treading lightly that this approach doesn't work, then someone around them should. For example, a major secular publication recently did a Q&A with a very popular celebrity priest. We won't identify the priest for two reasons. First, people get all bent out of shape and ask, "How can you be so mean to Father? He's wonderful." So, naming a popular priest causes the entire message to be drowned in a sea of distraction. Second, it doesn't really matter who the priest is, because they all take this approach. It's a wrong approach and destined to fail. In the end, Church teaching is reduced to mere opinion.

We don't believe in Original Sin. It's a reality whether we believe in it or not.

"We believe it" is not a strategy for evangelization, because announcing the truth gets watered down to a list of propositions that we think would be good for you to follow. Well, what if the person listens to your "beliefs" but isn't moved to adopt them for himself? Being more concerned about how a person will react or respond to the bold truth immediately places handcuffs on you. There is this constant, mealy-mouthed, weak, pansy approach to presenting the truths of the Church.

These aren't policies. They aren't action plans. They do not comprise one strategy worth considering among many. They are absolute truths, and to depart from them one iota brings about ruin in this world and the next.

Celebrity priests are too often hamstrung by their own fame and the resultant fear of losing human respect so that they are no longer seen as "Fr. Cool." So they find the least objectionable way of presenting truth — so unobjectionable that it really doesn't seem like truth, but just an opinion.

What that says, in unspoken terms, is the Church is just one set of beliefs among many. For example, Bp. Barron referred to Our Blessed Lord not as the Way, as Our Lord Himself said, but as the "privileged way."

So, why is it that many priests are more concerned with not giving offense than with declaring the fullness of truth directly, loudly and clearly? The last thought on Our Lord's mind as He preached was to avoid giving offense. It never got on His radar.

The last thought on Our Lord's mind as He preached was to avoid giving offense.

For that matter, the same can be said of His enemies — back then as well as today. The offspring of the serpent are never concerned about giving offense. They "go for it" every single time. They don't have the truth, yet they never hesitate to declare their case as though it's perfect truth. They go for the gold every time they open their mouths. That is why they are winning. There is something attractive about a person who is convinced of his position — not squirreling around, side-stepping, or trying to play it safe.

Why on earth would celebrity priests think they don't have to do the same? 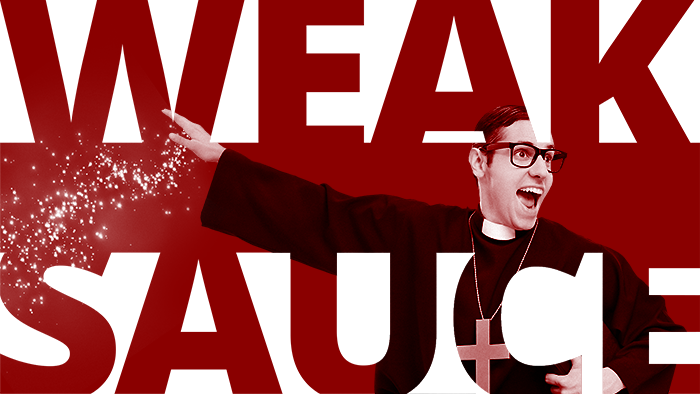 Weak Sauce
It has no power to save.