Please continue to excuse our rearranging in here as we accommodate our increased workload.

As you know, we're looking to hire some more staff. Please contact us on that point if you, or someone you know, is interested — and more bodies means a better use of space.

Real estate inside Church Militant is at a premium, and once we have all this rearranged (and some set construction finished), we'll show you what you've been seeing going on all this week, in its final form.

And our bombs — truth bombs — are hitting their targets. We are right over them, and we are taking their flak (their anti-aircraft guns, as it were).

But the larger point is this is how we have to do business in the cancel culture. Living life on the front lines just costs more money, no two ways about it. Church Militant has chosen to go the route of independence, as we said yesterday. That decision is driven by the duty we have to report the truth of current events in the Church and the world — and put them into a Catholic context. If we didn't do that, there'd be no reason to exist.

There already exist a boatload of "professional Catholic" media outfits who keep the full truth from you. Why does the world need another one? Likewise, there are a ton of secular media outlets that have no understanding of the spiritual war playing out and report the day's news without that all-important context.

Here at Church Militant, we do both. That's our commitment to God; Church; and you, our supporters. But traveling along the road less traveled, you pick up a lot of enemies. That's the reason it's less traveled.

Just like EWTN used to when Mother was running the show, you say the truth — the whole truth — and you'd better believe the long knives come out.

And quick sidebar from behind the scenes: As we've told you throughout the week, certain areas in the studio are named after these Catholic giants. The control room is named after Mother Angelica (a true initiation for her tenacity and forthrightness). And this main area where I'm currently standing is the Ven. Abp. Fulton J. Sheen studio.

They, and others, blazed this "road less traveled" we are currently on — and we will never be getting off.

Total independence, which Church Militant has now achieved with our own server farm, gives us wide latitude. It also gives us increased bills.

Marxists have overrun the Church in all kinds of key positions, and the heresy of modernism has been their tool.

More and more people are coming to Church Militant with information on the corruption in the Church. Quite a few of them say things like, "I used to think you guys were nutjobs or Catholic-conspiracy types. Turns out you were right all along."

Building trust with viewers takes a long time. Especially when you are reporting and talking about things that (1) nobody wants to hear and (2) seem fantastical. In our position, you don't start off from a "neutral" position. There are psychological hurdles that need to be overcome in viewers' minds (those two I just mentioned are two of the large ones).

But when a person comes to see and accept your foundational assumption, when they become convinced from the sheer evidence, then there is no turning back. You can't unsee something. Be it for lay Catholics — and even many, many clergymen — that's what Church Militant has done over the years.

We were the very first Catholic apostolate to start talking about the homosexual cabal in the Church (in any meaningful way). That was more than a decade ago.

It was our understanding that the Church had been overrun by that cabal that allowed us to raise the challenge to Abp. Bruno Forte at the 2014 Extraordinary Synod on the Family (about him saying, in the midterm document, that "homosexuals have certain gifts and qualities to offer" the Church).

It was the first time in Church history that such an audacious claim had been made publicly by a high-ranking Churchman, and we jumped all over it in the Vatican press room.

It was shortly after that that some well-placed sources in Rome told us that folks in the Vatican started paying attention to Church Militant — on a daily basis.

Church Militant was also the first to hammer home the reality, to put into context, that there is a nexus between modernism and Marxism. Marxists have overrun the Church in all kinds of key positions, and the heresy of modernism has been their tool for getting into the Church itself. Once the theology is destabilized, then politics can move in and supplant the theology (dressed up in theological-sounding spiritual fluff, sure, but still perverting it sufficiently so as to supplant it).

Think, for example, "Getting the vaccine is an act of love — loving your neighbor." No, it's not. But to the ignorant, it sounds like it makes sense.

Once politics has supplanted the theology of the Church in its day-to-day life, then the Church, as an institution, can be co-opted to achieve whatever political ends are desired by those who have their hands on the steering wheel. This is the current state of affairs in the Church, and Church Militant has been in the forefront of uncovering all of this. Each day, we bring you little bits and pieces of this giant overall picture — but the giant overall picture never varies.

The stage we have now arrived at is the literal joining up of forces in the political arena with those in the ecclesiastical arena. The intended goal is globalism, and the favored administration of that new global reality is Marxism.

There's no doubt about it. The bigger Church Militant gets, the larger the target on our back gets.

That is a huge hurdle for many Catholics to get over. It's horrible; it's ghastly; it's frightening — but it's real.

The good news is, as events unfold, more and more Catholics (as well as people of goodwill) are coming to understand this, and they are coming to us for help, exposure and providing more information.

That is all welcomed. Of course, we do everything we can — but it places a greater workload on us, which is why we are hiring and even shuffling things around inside the walls (to deal with the increased work).

One of the main battlefields in the spiritual war is the realm of information. It's vital that people come to understand the big lie being foisted on them. Exposing that lie (from the father of lies) is what we are all about here at Church Militant. Once the lie is exposed — one person at a time — people can then take that information and reorder their lives for their spiritual benefit.

Our entire mission here is to be used to help save souls. It is the truth that sets a person free, and it is the truth that must always be trumpeted. The most traveled road is to deny or ignore the truth. And that is the road most people travel.

The road less traveled is the road where total commitment to truth serves as the guardrails.

As we get very close here to the end of 2021, please make a donation to help support the work we do here. You can just click on the link and donate whatever you deem possible.

By all accounts, 2022 is going to be a hellacious year, and Church Militant is going to be in the thick of it, be it Church or politics. We are committed to serving you, for the sake of souls and Holy Mother Church.

Thank you in advance for your kindness and generosity. 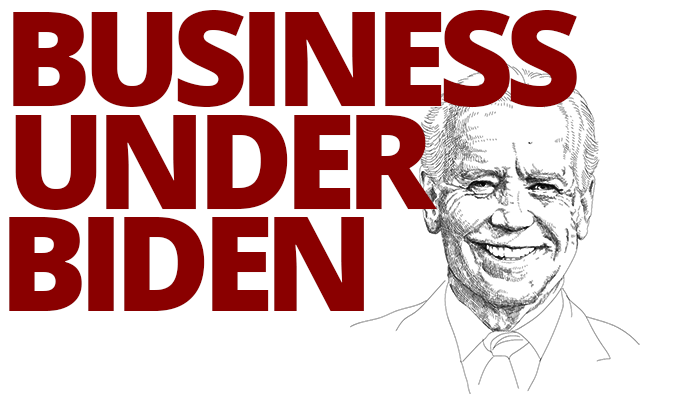 Business Under Biden
And standing tall in the face of the threats.