The hierarchy of the damned.

When Giuseppe Sarto was named as a bishop in 1884, his grandmother was ecstatic. She immediately set about planning a party. But Fr. Sarto lovingly sat her down and said it was no cause for a party. Looking straight at her, he said, "Nana, do you not realize that if I don't do my job as bishop, I go to Hell?"

Father Sarto was consecrated a bishop, in fact, and later became Pope St. Pius X. It's a deep reflection to meditate on his words that a bishop who fails to do his job will be damned.

Notice his reflection was not that a bishop who actively does bad things will be damned (although he would have certainly agreed with that), but that a bishop who fails to do what he should is bound for eternity as a slave of Satan.

Just as there are gradations in Heaven (some are holier than others), in Hell, there are some "more damned" than others in the degree of punishment.

Without exception, all humans are the object of the vilest hatred of the demons. It was, after all, their envy against us that brought about their fall from the celestial realm. God revealed to the angelic mind that He would create the material world (which they had no previous cognition of since it didn't yet exist) and that He would create man and unite Himself to man.

And since He would accomplish this without any loss of His Divinity, they would worship Him as the God-Man. That was too much for Lucifer and his cohort and so they rebelled. In other words, the demons have a hatred for humans that no person can imagine.

Could there be a more hideous sight in all creation than a priest in Hell? Well, actually, yes.

Using that information, let's now look to the reality of Hell — and yes, Bp. Barron, there are humans in Hell. God has said so.

When a human being is damned, he is immediately seized upon by the demons. Since the damned being is made in the image and likeness of God, regardless of how obscured that now is and will forever remain, it is still and forever true. The poor soul in front of them is theirs forever. But that soul is only a reminder to them of their own envy, not of their defeat.

A soul that is damned that had been baptized in life has the mark of defeat forever impressed upon his soul. The Cross, even in this damned soul, still presents to them a sign of defeat, serves as an everlasting reminder that they lost. Even 2,000 years on, most souls are not baptized, and to these souls are reserved certain tortures by virtue of the horror they present to infernal legions.

Now consider the case of the soul of a damned priest. Not only does this wretched creature have the Cross emblazoned on itself, but it also has the mark of the priesthood of Jesus Christ. This soul was consecrated to the service of extending the salvific work of Christ, carrying the victory of the Cross over Hell throughout time. His entire purpose, his reason for existence, was used to forgive sins and to call Christ Himself down from Heaven and to feed His flock.

Each time the demons behold this soul, they become enraged and recall that this soul delivered countless other souls out of their grasp with deathbed anointings, millions of sins being forgiven, countless Holy Communions being administered. Since the evil state of the soul of a damned priest has no effect on grace passing through him, his personal evil was never an obstacle to God in ministering to His people.

But the performance of his duties — done even when he himself was darkened by great evil — that did not save him from eternal death and the particular wrath of the demonic hatred in whose grasp he is now forever committed. It is part of the divine mystery that God uses even evil to accomplish His will, underscoring that He is always in control and that nothing has the power to overcome the desires of the Divine Heart.

Just as the fallen angels were called to everlasting service of the Divine and yet rejected it, the damned priest was called to that everlasting service yet now suffers a similar fate as those fallen angels — with one defining difference: In Hell, he is now their slave, tortured with an intensity that the other souls in Hell can only recoil from in terror even as they themselves experience their own agonies.

Saint Teresa of Ávila was shown the pits of Hell and the human souls there being ripped to shreds by the demons. She recounted that she could easily distinguish the souls of those who were priests because, unlike the other souls, their hands were burning in unspeakable agony as the fires of Hell ignited their palms that had been anointed at their ordinations.

Those hands, anointed to be raised in blessing and to hold the Body and Blood of their High Priest, were now transformed into ghastly tortures owing to their sins and damnation for having rejected the sacredness of their office. Could there be a more hideous sight in all creation than a priest in Hell? Well, actually, yes. The most tortured, reviled, agonized, revolting sight in all creation is the soul of a bishop in Hell, a successor of the Apostles.

If the demons reserve special tortures for the souls of damned priests, we can only imagine that it is Satan himself who unleashes the most unspeakable horrors on these men whose sacred office not only blessed, forgave and called Christ down from Heaven but created the priests to carry on the work of redemption.

Recall at the Last Supper that in his rage and fury, Satan himself approached Christ and demanded the Apostles so that he could sift them like wheat. The soul of a bishop is the most conformed to Christ and possesses the fullness of the priesthood of Jesus Christ. It is this office that ensures the work of the Church and Her mission to save souls that continues throughout time and history.

In the spiritual battle, Satan correctly views these men as the generals on the other side. And the truly astounding truth here on earth is that Satan has more regard for the office of bishop than the bishops themselves possess. He reserves an intensity of hatred for these souls that he unleashes on them forever.

They were the leaders, the successors of the very Apostles who were the foundation of the Church established by Satan's enemy. There are no words to describe what awaits the soul of a damned bishop, and we know from the writings of great saints and Fathers of the Church that there are many bishops in Hell.

A limitation of us humans here in time and space is that having no experience of life in the next realm, our imaginations are restricted from conjuring up images of the reality that awaits both the saved and the damned.

It is part of the divine mystery that God uses even evil to accomplish His will, underscoring that He is always in control.

Great saints have been given the slightest of glimpses of both, but even they fall back into a state of being unable to express what they have been shown. All they can confirm for us is what Our Blessed Lord has revealed: "For Heaven, eye has not seen, ear has not heard, nor has it entered into the heart or mind of man what God has prepared for those who love Him."

Of course, the same is true in reverse of the damned: They go to a place reserved for Satan and his fallen cohort who have been given everlasting rule in his kingdom of the souls of damned humans. The only real reality is the supernatural. All this, while "real" in the sense of the temporary, is passing away. Even as we walk through it, it is evaporating for each one of us like a morning fog, obscuring the actual reality.

The fog itself is not reality — but what it obscures is everlasting reality. So reflecting on all this, in particular the destiny of cowardly and wicked bishops, there is really only one question to ask: "Bishops, are you insane?" Reserved for you will be the most horrific tortures and there will be no end to them.

Father Sarto knew well the seriousness of his upcoming consecration. Too bad that virtually every bishop today refuses to accept that seriousness. They are trading away the glories of Heaven and embracing the horrors of Hell for gay sex, lies, money, being the toast of the party, human respect and so forth. Just as they sat atop the human order on earth, they will likewise sit atop the hierarchy of the damned. 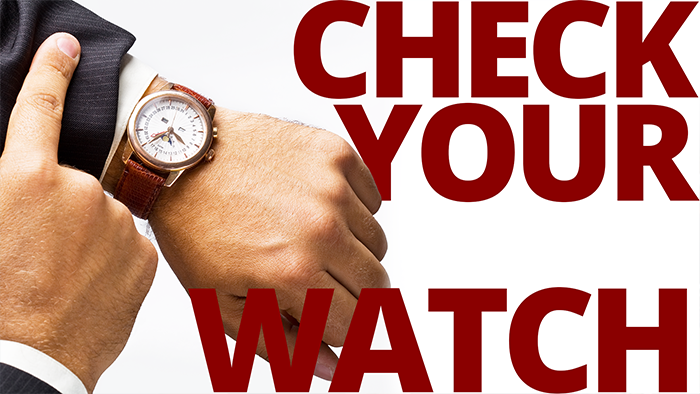 Check Your Watch
Time is running out.