Insane and Out of Control

And we're just warming up.

If you have the sense that things are out of control and off-the-charts insane, that's more than just a sense — they are. There are so many things going on, it makes your head spin, and in our work in particular, it's flat-out impossible to keep up with events.

On a personal note (as many of you know), I've been in this profession for going on 40 years. I've never seen anything like this. According to a Fox News poll, most people seem to have the same sense. Asked over the weekend if they thought things were either "Not in control" or "In control" in the country, 80% said, "Not in control." Just 15% said, "In control."

But let's dive deeper into that: On the surface, a sense of chaos and disorder and things being "out of control" would seem to favor the forces of revolution. After all, they have ginned all this up precisely to destabilize the nation so they can pin it all on Trump and get him ousted.

It started with the impeachment. No luck there for them.

The problem, however, with the Marxist charges (parroted by their media allies) is that none of it is true — just like "Russia, Russia, Russia" was not true. There was not one single grounded fact. It was, from first to last, a fabrication made up from whole cloth.

But the offspring of the Serpent traffic in nothing but lies, in case you hadn't noticed. But as usual, the Serpent and his minions — who always overplay their hand — may be doing the exact same thing here.

That evil crowd lives in the world of disorder, in a variety of ways. They have to follow their arguments to the logical extremes. So police racism doesn't necessitate just reform but the dissolving of all police forces everywhere.

You see, there's just not racism per se but "systemic" racism, according to the forces of Hell. Marxists love adjectives. However bad something is, they just throw in an adjective or two to make it much worse.

They write like infantile reporters who, not really knowing their trade, pepper their stories with adjectives to jazz up the sensationalism. Monday, for example, U.S. Speaker of the House and phony Catholic Nancy Pelosi didn't just introduce legislation to introduce "change" to the nation's policing, but "fundamental structural change." See how those adjectives make it so much more important?

For people who actually have property in Minneapolis, when the city council (populated by Marxist Democrats) abolishes the police force, your property will be worth absolutely nothing. Literally worthless. Same for New York City and Los Angeles as well. The pull-back of the police from the third precinct in Minneapolis and resulting inferno the week before last is exactly what the rest of the city will look like.

Cities have police because of Original Sin. There are evil actors who must be arrested in their movements. In the absence of an arresting force, who's to stop them? You do the math.

But this is the Left in all its full gore. In fact, that full gore is on display all over Blue-State America. The powder keg that is urban America is completely the fault of the Party of Death.

In state after state and city after city where systemic poverty among blacks is commonplace, where the Wuhan virus struck the heaviest, where violence erupted and black police officers were killed and black business were burned to the ground, every single one of them is in the hands of Democratic masters. And we use the word "masters" intentionally.

The 'America' they are trying to bring to birth, one of madness and no law enforcement, will implode on itself in a New York minute.

Black leaders don't care about poor blacks. They're just another part of the D.C. Swamp. They care about appearing relevant and lining their own pockets by keeping racism charges stoked. The "Jesse and Al show" is a farce. Those two charlatans laugh their way to the bank on the backs of their own people while large portions of Black America remain mired in poverty and dead-end schools.

An image has appeared in the midst of all the chaos: this image. This is the Democratic Party platform, summed up in photo. Questions immediately pop to mind when you see this — one being, "Might this kind of messaging actually inspire a quiet riot by real Americans on Election Day?"

The Marxist media make it appear as though the rioting and so forth is the majority of Americans, presenting the Soros-bought-and-paid-for mob intensity as unanimously "American." This picture is what Joe Biden stands for, despite his rambling rhetoric about "uniting the country." This is what he wants the country united around.

The "America" they are trying to bring to birth, one of madness and no law enforcement, will implode on itself in a New York minute. Down deep, some of them probably know that. But they don't care. They would rather see the nation wiped off the face of the earth than see it remain on the road to continual reform.

And here they share common philosophy with the U.S. bishops. So many false shepherds (who have been unmasked as lying, thieving homosexuals who hate the Church) see it as nothing else than a political tool to usher in the same one-world agenda their Marxist allies in the political world are doing.

They would rather see the Church burned to the ground than to remain in its spiritual form fighting evil — evil they have brought about. They have infected the very life blood of the Church with their wickedness and vile debasing of the Church's teaching. As Our Blessed Lord said to the Pharisees, "How can any of you escape damnation?"

While this picture makes a point regarding their evil, it doesn't go far enough. It could be construed to mean a large portion of the U.S. hierarchy is merely willfully ignorant. But that's not true; many in the hierarchy are actively working to destroy the Church. Others are just idiots of the useful kind.

On a side note, many faithful Catholics wonder why there's a constant drumbeat by Marxist Catholics to ordain women. Just glancing around the U.S. hierarchy, it's rather apparent we've been ordaining women for decades. (Apologies to decent women out there.)

But the offspring of the Serpent traffic in nothing but lies, in case you hadn't noticed.

These emasculated bishops — sensitive to any trigger that offers any offense to their carefully manicured image — have destroyed the faith of tens of millions of American Catholics and ushered in this filth we now witness playing out in the body politic.

They are every bit [as much] to blame for this as the Jesses and Als, as well as the Nancys and Kennedys. In fact, they are the ones who got the ball rolling to begin with, corrupting the House of God so that resistance to the demonic would be as weak as possible. These agents of Satan, in the Church and out of the Church, have done their work well.

But, one wonders, did they do it too well?

While their nature is to destroy (and they always revert to their nature), other people still recognize the law God has written on men's hearts and sometimes more or less correspond their actions to that of natural law, if only haltingly. In fact, civilization itself is a testament to the reality of that law.

Today, 80% of Americans think things are "Not in control." The question is: "What exactly does that mean and what will they do in response?" Biden and the rest of the Marxists are thinking it automatically means voting Trump out. What they cannot know — and neither can their "father" — is what the Lord of Heaven and earth has planned. 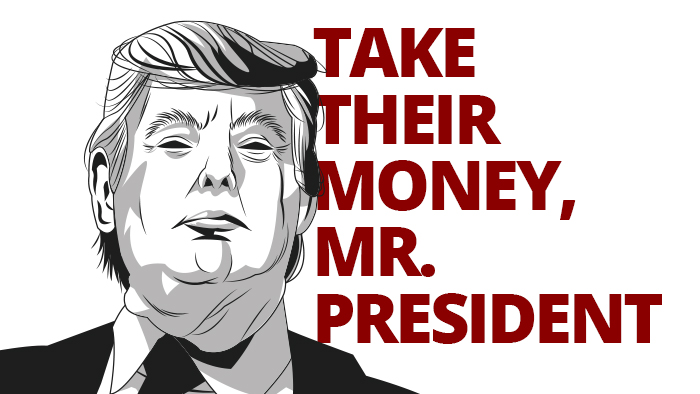