More so than the Marxists know.

It's remarkable — historical really — the amount of attention the Church is receiving in this election cycle.

It's of course amplified by the fact that fake-Catholic Biden is on the ticket. But more so because he's allowed by the U.S. hierarchy to present himself as Catholic. That bunch of phonies strutting around in miters pretending to be shepherds would damage anyone's faith.

They silence priests telling the truth about Biden — yank them from public sight. They hide behind their exalted "We aren't allowed to talk about politics because of our tax-exempt status" when they know that excuse is a flat-out lie. They get billions in federal money in exchange for keeping their pieholes shut.

They publish a worthless document each election called Faithful Citizenship, which is good for nothing except lining the bottom of cats' litter boxes, which actually improves the document. And they do nothing to actually form the consciences of Catholics, and that's because many of their own consciences are malformed (so maybe it's a good thing they don't talk).

This has been going on for years, but suddenly, it has all become front and center across the secular media. For example, last week, Church Militant was interviewed for over an hour by the liberal magazine The Atlantic and then for about 90 minutes by Vanity Fair for upcoming articles.

Both interviews covered the same ground — the Catholic vote. A lot of it got into the weeds and will probably never see the light of day, but nonetheless, they were free-ranging interviews covering everything Church and State related.

When we become aware of the interviews' publications, we'll pass them along. But why the sudden interest in all things Catholic? Well, everything is connected because of the stakes in this election — as Church Militant has been saying for over a year.

At some moment, there has to be pushback in order to preserve and restore. In truth, that moment may have come and gone already — the proverbial train having left the station. But we won't know that for certain until sometime after Nov. 3.

Barring some last-second miracle of repentance, which is difficult to do when you are losing your mental acuity, Joe Biden will be lost, eternally.

In the meantime, we must fight as hard as we can to preserve whatever we can. An interesting focus on Catholics involves the handful of priests around the country declaring the truth about Biden's fake and dangerous Catholicism.

And for the record, it was Biden himself who picked this fight with his advertisement about how much his Faith has influenced him: It hasn't. And how about his ridiculous statement, issued last month, of how important his Faith is to him? It isn't.

So it becomes fair game to critique his Catholic claims (even when bishops trample the First Amendment rights of their clergy when the clergy do so) because the bishops refuse. Bishops never bite the hand that feeds them: Never.

But every time one of these priests pops up — and instead of a handful, there should be thousands — the secular media suddenly picks up the story. The Freedom From Religion Foundation is even calling on the State to look into Fr. James Altman of La Crosse for his gall in denouncing the evil of the Democrats and Joe Biden.

The foundation would have gotten the job done much faster by just calling his bishop, the dishonorable William Callahan, who delighted in going after Fr. Altman's tone in public as he claimed his public statement was private.

But Altman is a taxpaying American who has every right to say what he thinks in the public square. Heck, if zillionaire athletes can shoot off their mouths about racism and white privilege and injustice as they are cashing huge checks for playing with a ball (as well as somehow playing the victim) why can't Fr. Altman speak?

But more importantly, as we discussed in both the interviews last week, Fr. Altman (a case both outfits knew very well; thanks, James Martin) has a higher duty to Almighty God. Unlike Joe Biden, who thinks he has nothing to answer for before the judgment throne of God in the area of child murder over decades and the advancement of sodomy as marriage, Fr. Altman does understand that his first allegiance is to Truth, the person actually sitting on the throne.

His bishop apparently doesn't quite grasp that either. He will, unfortunately for him. But imagine: An atheist organization comes gunning for a priest, wanting federal charges of some sort leveled against him, and his bishop stays silent.

And the secular media is covering all of this blow by blow — the Catholic political world. Even here in Detroit, as a brave priest took the Fr. Altman route, his own pastor got up and condemned what he said, apologizing for the good priest's denunciation of Marxist evil.

It should be stated that he spoke in that effected, feminized valley-girl voice so usual among a certain subset of the population. Of course, that got media coverage also. The reason the media are so interested, so intensely focused, is because they understand just how important the vote of Catholics is in the swing states, like Michigan.

They sense a danger for Biden, a Catholic, that he isn't locking down the Catholic vote, which to their thinking should be easy. The Latino vote is now getting a ton of attention in the political press, and it's because Trump is making giant strides there, actually closing the gap dramatically in Texas. And he's in a tie or even ahead in Florida. The Marxists are nervous.

They sense a danger for Biden, a Catholic, that he isn't locking down the Catholic vote, which to their thinking should be easy.

Both Catholics in general, as well as Catholic-heavy Latinos (47%), should be shoo-ins for Biden, but it's not shaking out that way. Almost half of Latinos are Catholics. They didn't swing for Biden in the primaries, and they aren't now either.

This forced Biden to issue the ridiculous statement earlier this week that he would "work like the Devil" to capture their votes, probably not a wise choice of terms for an ethnicity steeped in religiosity, but likely revealing of Biden.

More Catholic news — a report from Pennsylvania is focusing in on the very heart of the issue for Biden, asking, "Can Biden win back support from Catholic Democrats?" Unlikely is the conclusion in the article — at least in Pennsylvania.

To understand everything in the details, you have to see the bigger picture. Only then can things come into their proper focus. That's true in every aspect of life, as well as (most importantly) in the spiritual life.

Look at every single thing being thrown at Trump — from the secular world as well as from inside the Church. Then look at what Trump supports: A non-globalist view of the world and a world that cannot accept the horror of child slaughter.

Biden, a man with one foot in the grave and the other on a banana peel, not only accepts the murder of preborn children by the millions, he embraces it; he cashes in on it.

That's why they support him. Barring some last-second miracle of repentance, which is difficult to do when you are losing your mental acuity, Joe Biden will be lost, eternally. No one wants that, except Hell. Yet no bishop steps up and says this — especially his own bishop, Francis Malooly of Wilmington, Delaware.

Heck, Malooloy even gives the heretical Biden Holy Communion, adding sacrilege to both their lists of sins. The demon who inspires Biden to support and advance child slaughter for political gain is the same demon who inspires Malooly to profane the Holy Eucharist, placing the body and blood of Our Lord into hands dripping with the blood of tiny innocents.

Both men are very close in age; they are quickly approaching that divine judgment seat. How terrible to face the wrath of Almighty God — even the saints trembled before such a notion. Yet the press, especially the Catholic so-called press, never talks about this truth.

The truth is that everything is connected. They're all just ignoring the very last piece: Eternity. 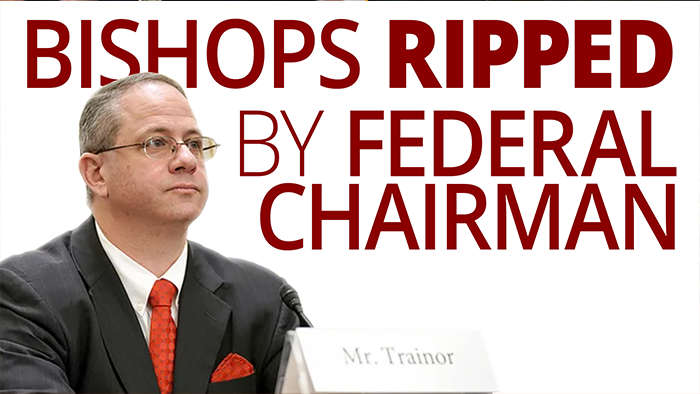 Bishops Ripped by Federal Chairman
Love of money is the root of all evil.