Biden is their man.

That stunning revelation is coming from those investigating what went wrong on election night and the couple of days following.

It was done through a combination of software and computer hacks in a handful of key counties in the United States, which piled up impossible margins for Biden, which flipped those states, thereby flipping the Electoral College and handing the election to Biden — for now anyway.

The vehicle for doing all of this was a combination of software by a company called Smartmatic and the actual voting machines themselves from Dominion Voting Systems. Of course, both companies deny all the allegations. But their denials do not make the election fraud untrue.

The lead on all this is a man by the name of Patrick Byrne, a billionaire who was asked to assemble a team of leading experts by the state of Texas to investigate claims of voter fraud there after the 2018 midterm elections. Byrne is leading the research efforts for attorneys Lin Wood and Sidney Powell and their lawsuits laying all this out.

He's also working the company that conducted the forensic audit on Dominion voting machines in Antrim County, Michigan, which discovered fraud and published the finding in a 22-page report earlier this week — a report, by the way, that Michigan's Secretary of State tried unsuccessfully to suppress.

So convincing is all the proof that the GOP in seven states have issued their own competing slates of electors.

Antrim County was the first domino to fall in this investigation of election night because after the solidly red county went way too much for Biden, a local citizen said, "something's wrong here." His inquiries forced the county to admit that 6,000 votes had flipped from Trump to Biden.

At first it was passed off as a "glitch," but as a Church Militant interview with expert Jay Valentine revealed, that sort of "glitch" is impossible; miscounts perhaps, but actually moving secured, tallied votes from one candidate to another — flipping them — the software doesn't have that capability. Why would it? Who would build that into a program that is designed to do nothing more than tally votes ... unless of course if someone wanted that to happen?

That was the finding of the forensic audit — that the software was not secure, could be hacked and that result could happen.

After news got around that the impossible "glitch" had occurred — which of course revealed the hacking potential — Michigan's Marxist-loving Secretary of State Jocelyn Benson issued a two-page letter blaming everything on human error by the clerk. That claim was untrue, as the forensic audit later proved.

Likewise, the state of Texas had rejected Dominion's overtures multiple times to buy their machines precisely because of their lack of security — meaning, they could be plugged into the internet and then an outsider could go into the tabulation software and shift votes around.

Likewise, a software update could be downloaded onto the machines — again by an outsider — which would introduce a mathematical equation, an algorithm would ensure a certain outcome.

That algorithm has been discovered by various researchers in the aftermath of the election — an algorithm that weighted Biden votes more heavily than Trump votes.

So for example, every vote received for Biden would count as one and a quarter votes and every vote counted for President Trump would only count as three-quarters of a vote for him.

When hundreds of thousands of votes are finished tabulating, that fractional difference would spell a very large margin. In fact, that was the very discovery revealed by a statistical model analysis, which lines up with multiple other models investigating what happened.

That model shows Trump actually won all the contested states — some by large margins — and here in Michigan gained 48.6% of the vote, enough to have probably won here as well.

Yet another analysis found that when all was said and done, Dominion machines — with their compromised software that was penetrable from the outside and downloaded software updates — added 3% to Biden on election night in key states.

If this is true — and it's all looking more and more likely — then Joe Biden did not win and is not the president. So far, all the Democrats have been able to say is "there's no evidence." But that, as we know by now, is completely false.

What there is, is an unwillingness to engage with the evidence. Denying the evidence — in the face of mounting not just evidence, but actual proof — does not make the evidence nonexistent.

January 6 is the date — mark your calendars — that's when the president will be chosen.

All of these hearings in state capitols all over the country and this week in the U.S. Senate are being shown proof of election fraud that flipped the election.

So convincing is all the proof that the GOP in seven states have issued their own competing slates of electors, and various U.S. senators and Congressmen have said they will publicly challenge the Electoral College count on Jan. 6 when the sealed ballots are opened and force this issue — that the state delegations in the U.S. House should choose the president as the Constitution supplies for in the face of an untrustworthy outcome.

January 6 is the date — mark your calendars — that's when the president will be chosen. And, for the record, it's also the Feast of Epiphany, which means "the manifestation."

So where does China come into play?

According to Byrne, who has been looking at all this for two years now — and in great detail since August — his team of about 40 brainiac experts say it's the software and that China is "under the hood" of that software, having contributed to it through a complex series of foreign companies buying and selling the voting systems. But — and this is the key — always keeping the bad DNA, the manipulable software in the machines, at every juncture.

Byrne says to get a clear understanding of how the election was stolen you need to understand three key items:

Atlanta, Philly, Detroit and Milwaukee had such aberrant results compared to other counties around the nation — large, middle and small — with very similar voter demographics, and no one on the Left has yet to proffer a single viable explanation as to why. So on this count as well, check.

And as to China specifically, he says, "There's a chain of command basically from China through Iran to Cuba and Venezuela. The Chinese are funding Smartmatic through the Panamanian division of Smartmatic, but it bounces through Venezuela. There is code [Smartmatic] buried within the Dominion machines that has been turned up that seems to show Chinese provenance."

So the question is: Why would China want to get Joe Biden elected?

When you look at the history, you know why. Defeating Trump, who has been a hard-line dealer with China, would be at the top of their list. But Biden is a bonus because of all his past dealings with China and support for the communist nation.

Then of course there is the business of his junkie, sex-addicted son Hunter and all the incriminating evidence on his hard drive, which demonstrates pretty substantially a "pay for access" scheme when Biden was vice president under Obama.

But controlling the outcome of the U.S. election is only a part — albeit a very large part — of the Chinese communist's ultimate goal of world domination.

As we are now seeing, they have infiltrated all levels of American life with a spy network that would make Alger Hiss blush.

The threat from China to U.S. sovereignty and security is now the topic of intense scrutiny in Washington as more and more comes to light about the degree of the spy network in the nation.

The Chinese communists got Biden elected, and much of the hierarchy is celebrating.

China has made world domination a stated goal. Communism is a system that depends on global conquest for its success. So all fronts must be carefully managed. Threats must be eliminated and normally hostile institutions must be infiltrated and subverted, or at the very least neutralized.

And that's where the secret communist Theodore McCarrick enters onto the stage early on in the Francis papacy.

The serial homopredator, trained in communist tactics in Switzerland in the aftermath of World War II (as Church Militant first discovered and reported two years ago) and then set loose in the Church — was the one hand-picked by Francis to strike the Vatican-China accord two years ago.

It has been a devastating blow to the Church in China, but for the commies in Beijing, it has given a worldwide impression of openness to the West and a spirit of cooperation.

And as Church Militant also reported months ago, according to at least one Italian hedge fund economist, the deal has enriched the Vatican by billions of dollars flowing from Beijing to Rome.

Sometimes it can be daunting to understand how little, seemingly unrelated things fit together into the big picture, unless you understand the big picture first. So the big picture: China is a godless nation that hates religion and imprisons believers. Religion is the enemy of Marxism and must be eliminated.

Likewise, Marxism's goal of world domination not only includes the elimination of religion as a key component, but all political adversaries as well. This means doing whatever is necessary to undermine and eventually overcome those rivals.

Rigging an election through a clever network of corporate mergers, acquisitions, divestments and licensing agreements — which permitted manipulable software to be used to secure wins in a handful of key cities and counties, which would flip an election away from an adversarial president to a long time ally — fits the pattern perfectly.

Likewise, buying influence with a world religious leader to give them cover, as well as rail against their adversary, also fits the pattern.

So ask yourself one simple 60,000-foot question: Is China happy with the outcome, to date, of the election? Is the Vatican?

The Chinese communists got Biden elected, and much of the hierarchy is celebrating. 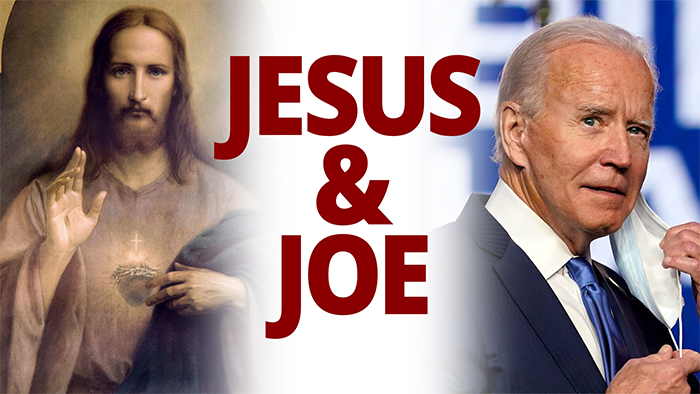