Let it all hang out.

Say what you want about exposing the filth in the Church — it's got to be done. However horrid, shocking, lurid or gut-wrenching all this is, it's got to come out — all of it; every last bit.

Why? Well consider this. When you look at other societal cancers, there is a certain level of what we might call expectation.

Most people come to know and quietly accept on some level that organized crime exists, that there are highly immoral and unethical, if not illegal, practices that go along with government. Most people, again, quietly accept that large financial institutions sometimes play fast and loose with the rules and that Hollywood is a breeding ground for sexual predators with a never-ending supply of victims.

Again, people quietly understand that there are some parts of town you just shouldn't go into because there is great danger in the form of gangs, drugs, prostitution and violence.

Most upstanding people certainly don't like these realities, but they understand that as long as human nature is fallen, there are going to be things like this, and they trust the legal system can at least keep it to a minimum, provided, of course, that cops, prosecutors or judges are on the up and up which, thankfully, seems to be most of the time.

But when faithful Catholics come across this kind of evil within the Church — and come across it on such a large scale — it's revolting.

To be frank, the perversions and scandals and financial immorality are hardly any different than what we hear about when news reports pop up about the mafia or politicians or drug cartels. Most people hear those stories, are sorry they happen, shake their heads and get on with daily life.

But when these things are happening in the Church, that cannot be the reaction. As loathsome as these terrible things are when they occur outside the Church, they don't generally have a spreading influence beyond a criminal or immoral population.

Most people don't use crystal meth, or participate in human sex trafficking or hatch plots to rip off hundreds of millions from the pension accounts of the elderly. So as horrible and damnable as those activities are, they are somewhat limited in scope.

But when a priest or a bishop is involved in anything like this, there is also and more importantly the spiritual toll, and that is counted in various ways.

First, the soul of the cleric himself, unrepentant of sexual, financial or doctrinal abuse, or of ignoring vows, that cleric will be damned — and straight up here, totally deserves to be.

Second, the unrelenting scandal caused to the faithful and the innocent. The discouragement that sets in — which is always diabolical — oftentimes drains the spiritual will to live a holy life.

Third, the horrible, miserable example that is set before non-Catholics, presenting to them an image of the Church that it is little else than an international crime syndicate, which is what many of these leaders actually are.

And fourth, and most importantly, the "great emptying" of the Church's beauty in Her teachings and call to supernatural glory.

The men — bishops included — who have raped physically mature teenage altar boys and seminarians, who have ripped of millions of dollars, who have dressed themselves up in luxury and comfort, the men who have sat by and sinned greatly by their silence allowing all this to go on, all of this — the action and the complicit silence — destroys souls because they are deprived of the truth.

As long as men like this remain in the clergy, as long as they are allowed to continue their way — again, both sinful activity and/or acquiescent silence — the destruction of the Church will continue.

This is why all of this — every filthy, stinking, rotten, demonic piece of it — needs to be exposed.

How many of you listening to this know of at least three very close friends or family members who have left the Faith? Why do you think that it is?

They brought psychologically disturbed homosexual men into the priesthood by the thousands to advance their cause.

They brought in Marxist-minded men to help undo the culture of morality and religion, paired with other Marxist efforts in the other institutions of media, entertainment, the courts, politics, commerce, education — you name it.

It's all been part of a much larger picture to completely destroy Western civilization.

Consider this simple thought: We know for absolute historical certainty that Communist agents infiltrated every public institution as part of a gigantic plan of world dominance. No one can be surprised by that. World dominance has been the stated goal of socialism/Marxism from its earliest days.

When the Bolsheviks brought their revolution to Russia 100 years ago, they set out on that course — the defeat of the West, including its deep roots in Catholic morality.

So here's the obvious question, a question many Catholics don't like pondering: If the Commies infiltrated all those other cultural institutions, why wouldn't they also infiltrate the Church? Sure, the means of infiltration varied from one institution to another. But in the case of the Church, it was the "long game" approach.

Get immoral men into the seminaries back in the 1920s through the 1930s and then sit back and let them slowly destroy the hierarchical Church by destruction of the hierarchy.

That generation of immoral men — many of them active homosexuals — came of age in the 1960s and moving forward, and the fruit of their evil work is what we are now enduring.

Is Cardinal Cupich a Communist agent? It doesn't matter if he has his Commie card in his wallet and reports secretly each week to his commissar. He and many other cardinals and bishops are infected with the ideology — that's what counts.

Some of them — some of them — also raped altar boys, thus exposing the tip of the iceberg. There is much, much more evil at work here than just the horrendous evil in itself of sexual assault of teenage boys by pederast predators.

Catholics need to wake up and understand how their Church and civilization are being stolen right out from under them, with consequences in this life and, most importantly, the next. 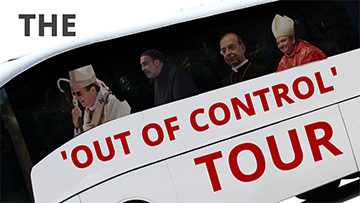 The ‘Out of Control’ Tour
Derail this filth.