‘It’s Not About Numbers’

OH. It's absolutely about the numbers.

May 8, 2019  0
Podcast Available for Premium Subscribers

In the secular media article on the enormous decline of the Church in the archdiocese of Detroit that we highlighted the last couple of days, one priest is quoted as saying, "It's not about a membership drive or the number."

Oh, yes it is. It is precisely about numbers — just ask the bishops who meet regularly with the finance committee. Just ask Abp. Vigneron who this past couple of weeks ordered a video or audio recording of him to be played at all Masses in every parish to push this year's annual archdiocesan collection.

Ask Abp. Vigneron, and every other bishop, if it isn't about the numbers, then why are you trying to evangelize? They will say it's about "bringing hearts to Jesus."

Well, as in so many other areas, faithful Catholics have a hard time trusting their bishops these days, and this is just one more reason why.

For the past half-century, hardly any bishop in America had given a darn about "bringing hearts to Jesus." If they had, they wouldn't have lied and covered up the homosexuality in their own ranks.

They wouldn't have completely neglected teaching the Faith and avoided those pesky, inconvenient "truth bombs," to use Vigneron’s own terminology. They wouldn't have ordained and promoted enormous numbers of homosexual men into the priesthood.

But now, 50 years later, when the consequences of their folly, neglect, cowardice and malice has had the predictable result of a Church-wide apostasy, now all of a sudden they want to "bring hearts to Jesus."

This is more spiritual abuse, hiding behind spirituality, trying to mask over the reality.

The number of faithful Catholics have dropped off the cliff and is heading to a huge crash at the bottom of the gorge, and now, and only now, are the bishops starting to take notice and come up with goofy plans to "fix" the problem they created.

It is about numbers.

The very first evangelization effort of the Church on Pentecost, recorded in Acts, says Peter preached to assembled Jews in Jerusalem, and that day, about 3,000 were added to their number.

Of course it's about numbers. But for the bishops, the numbers they are concerned about are the dollars, not the conversions per se. Their only interest in converting hearts is that the more people who convert or revert, the more dollars will flow into the collection basket — presumably.

If they cared about hearts, they wouldn't have looked the other way as the bodies those hearts are in were being raped and sexually assaulted.

These men are incapable of even addressing the actual problem, much less fixing it. They don't even know what it is. Think about it, if they admitted what the real problem was, they would have to resign on the spot.

So in some psychologically twisted effort to absolve themselves of their own guilt, they propose stupid solutions, like Protestantized catechesis, happy-clappy Masses and side-stepping the weighty issue of homosexuality among their own ranks.

They propose these solutions in a manner that makes it appear as though they had nothing to do with the problem in the first place.

The vast majority of them need to resign, for multiple reasons, after they publicly admit the massive, corrosive damage they have caused to the Church, to souls and bodies.

What man among them would be a source of inspiration to a young man looking to devote his life to the Church, seriously? What young, red-blooded American male would look at virtually any of these men and say to himself, "I want to be like him"?

"I want to be down with homosexuality — either practicing it, promoting it or defending it. I want to be a liar or a deceiver. I want to pretend I care about the Faith, when all I really care about is protecting an institution. I want to run enormous fund-raising drives and then be completely UN-transparent about how the money is spent."

It's not about the number — my foot. The problem is it has been about nothing but numbers for decades — just the wrong numbers.

The faithful are going to have to wait for about another roughly five years when all these doctrinally, morally or financially corrupt bishops have at last left the scene and then hope and pray intensely that the men who come after them will truly love the Church, which these men have decidedly not.

And then, we have to hold out some kind of hope that there will actually be something, anything left of the Church for the next generation of bishops to actually work with.

But anyone who thinks the Church will look anything like it does now, just 10 years from now, doesn't understand the depth of this crisis. 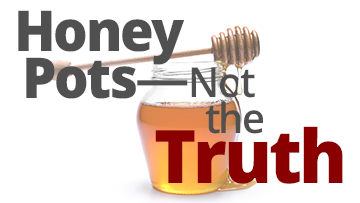 Honey Pots — NOT the Truth
But the 'honey' is poison.