With one major problem.

Campaign 2020 has got to go down as one of the most strange-yet-noteworthy elections in practically all of the country's history. It's strange for the same reason it's also noteworthy: America is, at long last, having to face, head-on, what we could call its "God problem."

On the one side are amassed the political forces of atheism — the anti-God crowd. Most of them are honest enough at least to admit that. Party leaders, on the other hand, still give religion a tiny bit of lip service, but if you look just below the surface, it's a deflection meant to ensnare a few gullible, low-information voters.

So at their convention, it was a hit-or-miss proposition if the phrase "under God" would be recited or dropped each night during the Pledge of Allegiance.

The one side consists of straight-up anti-God Marxists (led by a phony Catholic). Check that box. So on the other side, it would be neat if you could simply say, "We are the God forces" — a kind of political version of God's army. It would be good, but it wouldn't be accurate.

There is, to be certain, a vague sense of religiosity, of understanding that morality and virtue and so forth are on the ballot much more than they have ever been. There are discussions about America needing to return to God, discussions which have been heard for years but are much more amplified this election.

In fact, tens of thousands of yard signs that say "Jesus 2020" are being produced and shipped all over the country. The old lines that "They are flying off the shelves" and "We can't keep them in stock" are swirling around, creating the newest political phenomenon in an already strange campaign.

So, at first glance, this appears good. What self-respecting Christian would disagree with the need for Christ to be the center of our political (and thus national) life? But there's a snake coiled up under the table here, and it's been there a long time, waiting to strike. This election is its moment.

The clearest predictor of how a person will vote is how he understands or accepts the things of eternity.

"Jesus" means different things to different supposed followers. And America, as a nation, was established to allow this to be the case. Whatever you want to believe and ascribe to religion, you can — the correctness or incorrectness of your opinion be damned. What matters is that I can believe. What I believe and hold dear and sacred is unimportant.

And what's more, it's none of the government's business. "Religious liberty," it's called in principle, and "separation of Church and State" is what it is termed in practice. But Houston, we have a problem. This governing principle denies truth. It makes religion become a matter of personal opinion.

Creeds may be believed. But the substances of the creeds are wrong, not to mention contradictory. This is why, on the "God side" of politics, there is such discord. For example, many Trump supporters are all down with the gay agenda; they have no problem whatsoever with same-sex "marriage" and so forth.

But inside the same camp are those who are not down with it — at all. Yet they are all backing the same candidate, who himself appears to be at least indifferent to it. The morality of homosexuality seldom comes up as a topic, or perhaps, better stated, seldom is allowed to be brought up on the God side. That would not be politically prudent.

And besides, my Jesus is okay with it, even if your Jesus isn't. The same is true with a host of moral or religious topics — yes, even including abortion, and yes, on the God side. There is no lockstep uniformity in God's army regarding abortion. It's all over the map.

Sure, it's certainly more pro-life or anti-abortion compared to the Marxist side (which definitely is uniform and lockstep on this). But comparing yourself to a party that believes in and wants to codify infanticide is a pretty low bar. The Democrat-Marxists are so low, it's impossible to be lower. It's hard to fall off the gutter.

The combination of solid Marxist unity on the anti-God side and lack of unity on the God side is precisely what has allowed the Marxists to bring their revolution to your streets, your front doors. So the question needs to be asked: Why doesn't God's side have unity? The answer is that, from the very beginning, an error was accepted into the political fabric — the error that people are free to believe whatever they want about God, and that somewhere down the road, this wasn't going to present a massive problem in how society orders itself.

As we said, the snake is coiled up under the table. Eventually, sooner or later, it's going to bite you. The old political logic that people vote "according to their wallets" is actually true, not on its own. People vote according to their beliefs in the supernatural — according to whether they believe or not.

That's why the clearest predictor of how a person will vote is how he understands or accepts the things of eternity. Those who don't vote Democrat; those who do vote Republican. But look at this for a moment: The "God or religion don't matter" crowd; for them, it's a simple, straight-up choice. There's not a lot of gray.

But on the God side, gray is king. There is no solid basis — no firm foundation — from which to view the universe and understand your place in it. Religious pluralism is what has brought America to the point of collapse, perhaps even to the point of civil war in some form.

More than struggling to get to Heaven, what was important was fellowship on the road to Hell.

In this, the U.S. bishops have been complicit for decades. They've been content to sit back and talk about ecumenism and getting along with our "separated brothers and sisters." What they've not done is present the truth; they've swept it under the rug or kicked the can down the road, take your pick.

They've spent so many years — decades — trying to get along, trying to get a seat at the table, to be accepted that they've sacrificed everything of the Faith. They've given up and handed over the divine truths of the Catholic faith.

And every step of the way, Catholics give up a little bit of themselves — here and there, bit by bit until, well, the Faith no longer exists (or doesn't matter). After all, we're all Christian right? This watering down, the great dilution, is what has allowed the likes of James Martin to become, in practice, the pope of America.

The Faith has been substituted for the lie that "All creeds hold equal weight." They don't. They never have, and they never will. Catholics were hoodwinked by a bunch of misguided, weak men in miters back in the day (who were so desperate to get along that they went along with the dismantling of the Church).

The idea of evangelizing and converting what was at one time "Protestant America" was abandoned in pretty short order. Some historical figures in the Church tried, to be certain (Abp. Sheen being perhaps the most notable or visible), but without a collective effort, it was bound to fail.

More than struggling to get to Heaven, what was important was fellowship on the road to Hell. And so, now the nation has descended into a kind of political Hell and engages in the politics of Hell. So, sure, yard signs promoting Jesus 2020 are cool and all that, for what they're worth.

But if people who claim to be followers of Christ don't nail down who Jesus is objectively and what He specifically taught and come to a clear understanding of which religion He personally established, then none of it really matters.

"Jesus" is too elastic in America; that's why everyone who wants to can claim Him for their cause or side. In the end, it's true — it all comes down to atheism vs. Catholicism. There are no other "sides." It's complete non-truth vs. fullness of truth. And that's how truth rolls. A half-truth is still a full lie.

If Trump wins, Catholics who actually believe — not the bishops, not the dissidents, but actual Catholics — have got a massive row to hoe, decades of errors and lies to begin undoing. Sadly (for Catholics at least), the errors and lies they will have to fight are the ones they've heard from their own pulpits for decades.

America is on the brink because of the failure of the Catholic hierarchy to fight when the fight would have been much easier. Trump winning will only be the opening salvo in the real fight that needs to be fought. 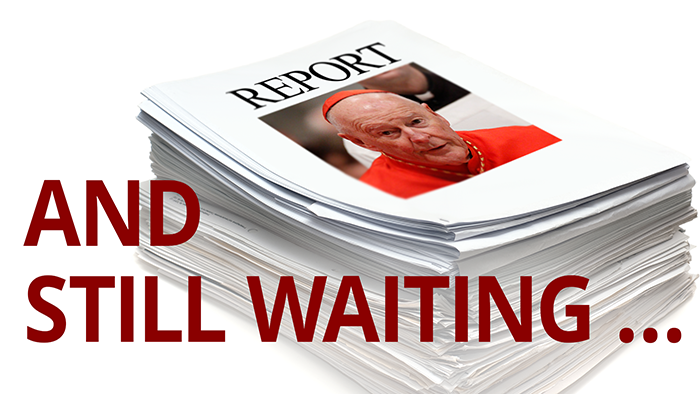