December normally is a month when the Marxist media trots out more important distortions than any other month because they produce zillions of stories about Our Blessed Lord that distort the truth about Him. In short, they distort the Divine.

This year, however, they have ramped up the distortion game — this time against democracy, claiming Biden won, to which you have to say: "Well, if you're willing to lie about Jesus, why wouldn't you lie about Joe?"

First, there's the case of Our Lord. Since Christmas falls in December, Marxist media usually flood the airwaves, newspapers and periodicals with "investigations" and "reporting," claiming everything you have ever heard about the birth of Our Lord is simply wrong.

It's a steady diet of drip, drip, aimed at slowly but surely eroding people's faith.

One point, however, they do push is that the Holy Family did travel to Egypt. They never get into the real reason — to escape the murderous Herod — but they do use that part of the Gospel to push the narrative that they were illegal immigrants.

Now, as someone who has been in news media my entire professional life, I am very familiar with these tired claims by so-called scripture scholars, who are generally atheists, for the record. Various outfits I worked for always did their own follow-up stories on these asinine claims around this time of year. They'd mask them under titles like "In Search of the Historical Jesus" or "What Really Happened that First Christmas?"

The point, of course, is to weaken faith by raising distortions of the truth in people's minds. No one story on its own probably inflicted much damage on faith, but one story added to others and then still others creates a cacophony of noise, which drowns out truth.

It's the old "death by a thousand cuts" approach. Take for example standing in line at the grocery store or pharmacy checkout, where various magazines are on display. The shopper is just standing there and sees various publications like TIME magazine or a host of others whose covers raise the question in their minds about the truth of Our Lord's birth.

Well, it's almost the whole point. The actual point is to raise sufficient doubt so as to conclude that Jesus is not God. That's the point, and to that end, all sorts of other distortions are thrown into the mix. It's a steady diet of drip, drip, aimed at slowly but surely eroding people's faith to the point where a tipping point is reached in the culture at large where it just becomes "accepted fact" that Jesus isn't God.

C'mon man. I mean everyone knows that. It's everywhere.

Indeed, it is everywhere. But the work isn't done by just asserting Jesus isn't God. After all, the Marxist machine can't just leave out there what Jesus is not. They have to replace the idea of what Jesus was. It's not enough to just be "not God." So, who or what was He then?

In some ways, these distortions are even more impressive than the destruction of His divinity.

Of course He wasn't God. But He was — take your pick here — a revolutionary, gay, fighting for the poor, an illegal alien born of an unwed mother, an itinerant Palestinian preacher.

That last one, by the way, is what Marxist senate candidate from Georgia Raphael Warnock preaches. Jesus wasn't Jewish — He was a Palestinian preacher. That would have been a surprise to the Samaritan woman at the well.

Every one of these substitute identities denies and distorts the reality, but it builds on some tiny, little perception in people's minds of some even tinier aspect of the truth. In fact, the Marxists bet on this very point — that people have some extremely dim knowledge of the truth that can then be distorted. After all, you can't distort something before it first exists. A person has to possess some knowledge before the work of distorting that knowledge can achieve its desired end.

So the business of distortion is really based on a double-barrel approach. First, deny the truth, then substitute the truth with a distortion or even flat out lie.

The business of suffocating the truth, however, always goes back to the work of the demonic — without fail — always.

When we switch over to the media's favorite lie of the moment — that Joe Biden actually won the election — we see the same dynamic at play.

First came a denial of the truthful outcome, which they even went a step further than with the denial of Our Lord's divinity and actually helped engineer. By every measure known to the human intellect, Donald Trump won the election. But this truth must be denied.

Then there's the distortion that Joe Biden won and the constant drip, drip reinforcement of that narrative.

Nothing truthful can be given an airing. It's all lies all the time. Whether it's about Jesus or Joe, just lie, and sooner or later everyone will just believe it because, c'mon man, everyone knows it.

What are you, a conspiracy theorist? Everyone knows Joe won just like everyone knows Jesus was gay, because that young guy leaned on His breast at the Last Supper. It even says it in the Bible. Everyone knows it, man. It's everywhere. Get real.

The "glory" of the lie is its ability to spread largely through the media, which is why it was so critical to get control of it. The vast majority of people simply are not deep thinkers, meaning they don't think critically; they don't examine the propositions brought before them.

In the business world, it's called "marketing." Coke is the real thing. Chevy is like a rock. Nike ... Just do it. They are short, little slogans that say everything and nothing at the same time — thoughts proposed to your intellect that are just accepted after a while as fact — so much so that you can finish the line. For example, Frosted Flakes — they're what? They're great.

While all of that is mostly innocent or neutral, when the principles beneath it are applied to a lie, it can destroy lives both on earth and in eternity: Jesus was gay. Joe is the president.

The culture has sunk to such depths because of that single point — that most people can be exploited because they don't think critically.

This has been the failure of the hierarchy for the past half-century or even longer. They have abdicated their duty in the face of a rising tide of Marxist distortions — to confront those lies head-on. Heck, many of them actually embrace the lies and give credence to the distortions. That will be to their everlasting horror.

So next time you hear Jesus isn't God — on a magazine cover, from James Martin, through some cute little meme suggesting a distortion, or that Trump did not win and Biden is the president — think critically.

Jesus is God and Joe did not win. 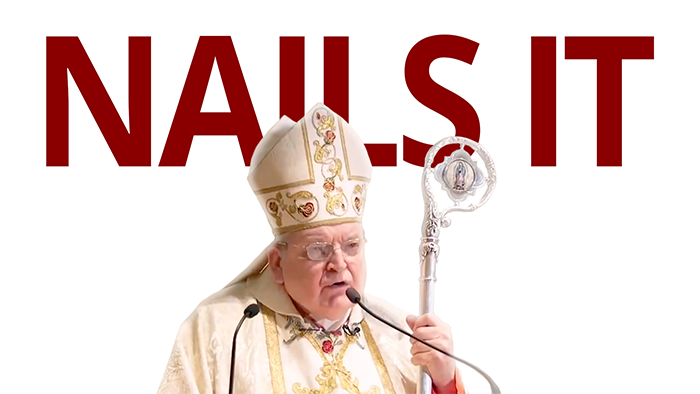 Nails It
Worth the listen.