The Left is brilliant at it.

It's blindingly obvious that Marxists in the Church and in the culture at large are now joining forces.

Take, for example, the issue of infanticide.

Virginia's Democratic governor, Ralph Northam, last year actually said during a radio interview that if a child survives an abortion and is laying there on the table, then a "discussion" would ensue about what to do him.

And then, lo and behold, turns out that there are some Amazonian tribes that still practice the gruesome ritual, in their case, burying their children alive when born with a handicap or even twins.

Now, this isn't to suggest that synod leaders are supporters of infanticide like Virginia's governor is, but it is to say that the Brazilian bishops' conference wasn't disturbed enough by the practice to fight against it — kind of like the U.S. bishops' conference doesn't seem bothered enough by abortion to have lifted a serious finger against it.

Under the phony banner of tolerance, homosexuality is gaining more and more acceptance in the Church.

Just like it was introduced into the culture at large, first tolerance, then jammed down your throats.

When you look down the list of issues on the Left, it looks like a list of topics from homilies at almost any Church in the country, immigration, death penalty, gun control, climate change, doesn't matter.

And what's more than a little disturbing is this is the exact same kind of chatter you hear in Rome continuously.

Rome, in fact, seems to have been transformed into Leftist HQ, the center in the world for propagandizing the peoples. It's almost like Ocasio-Cortez is the Vatican Secretary of State.

What the joining of forces means is simple, the Church is now being instrumentalized and weaponized to become a massive PR machine for Marxist and socialist politics.

The Pope's comments that we must obey the United Nations, however he specifically meant or intended them, is just another example of things being said in such a way as to lead to multiple and even contradictory interpretations.

Confusion, which this Pope has said he wants, is a hallmark, perhaps even the hallmark of introducing socialism into a given culture.

For example, the now annual ritual of attacking Christopher Columbus, whose voyages were the instruments by which the Catholic faith was introduced into this hemisphere.

Columbus is demonized for being the original colonist, an imperialist, etc.

Yet why is what he did 500 years ago considered so bad and evil yet entire indigenous civilizations routinely practiced child sacrifice, enslavement of nations they conquered? The formerly brutal civilizations were eventually Christianized by the explorer's efforts.

The difference is that when they conquered, slavery and human sacrifice followed. When the Europeans conquered, the Faith followed.

That's why Notre Dame bowing to — or, better said, perhaps embracing — the PC culture was so happy to cover up the series of Christopher Columbus murals adorning the giant hallway of the main building.

How do these socialists think the world has emerged? Dozens of civilizations have conquered earlier civilizations.

It may not be laudable, violence and murder, but there is no civilization which has not engaged in it — and some much more than others.

To single out one civilization — Western civilization, which was built by the Catholic Church — for some sort of raised level of disdain is wildly unjust.

Yet, it is the norm among the socialists, the Marxists both outside and inside the Church.

As the 2020 U.S. presidential election slowly gets into gear, start to look for this shared agenda.

Marxists in the Church and those in the culture know that the Catholic Church, even in its severely tattered state right now, is the remaining obstacle to their goal of world domination.

They are close — ever so close — joining forces has worked brilliantly for them.

We have to fight back. 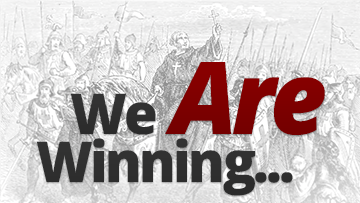 We ARE Winning…
Never give up.