The corruption is beyond the beyond.

Some of these bishops — in fact, most of the bishops in the United States — need to just play things straight (pun intended) and come right out with it — they are perfectly fine with homosexual men being priests.

As long as those men don't get in "trouble" with the law, or do something that might get the diocese sued, or bad PR, then they are fine keeping their dirty little secrets.

And in the case of Buffalo Bishop Richard Malone, for example, he doesn't even seem to care about the bad PR. Heck, he's even left a priest in as pastor who forced oral sex on a 6-year-old, with witnesses, as we reported last summer.

You'll remember Church Militant's encounter with him last November in the Detroit airport asking him why that priest is still in ministry.

So if he'd do that, what's the big deal about a little gay priest action going on with his seminary rector, right? Yep, Church Militant was one of the first to tell you a few months back that Malone's seminary rector, Fr. Joseph Gatto, had made unwanted sexual advances on two men and had to be removed as a result.

In fact, sources in and out of the seminary system, as well as the official diocesan network, confirmed for us that Gatto would put prospective seminarians through a little homo test, trying to figure out if they would consent if and when the moment were to arrive.

Those who passed the test, in Gatto's estimation, were accepted into seminary, but those who didn't appear to go along with the homosexual agenda, he denied.

So after getting reported and it becoming public through local Buffalo media and Church Militant, Bishop Malone yanked him from the seminary and sent him away for "evaluation."

This lot is always "evaluating."

The results of the evaluation? Malone has stuck Gatto back in active ministry after determining that Gatto trying to ascertain which potential future priests he might be able to have sex with didn't rise to the level requiring removal from the priesthood.

Think about that for a moment; stop and consider.

A seminary rector, exploring which young men who want to give their lives to the Church, testing to see which might welcome his homosexual advances, that kind of man is still OK to be a priest in the estimation of the bishop.

And for the record, all this is very public and very well known.

Kind of curious what his communications director, Kathy Spangler, thinks of all this personally.

Remember her, she's the woman in the airport video who is trying to distract and block us from getting answers from Malone about covering up the abusive priest.

Kathy, question for you. Do you have a son? How about a nephew? How would you feel about that young man applying for seminary to Gatto and being felt out if he's gay for future sexual advances?

Lest we think Malone is the only bishop totally down with gay men hanging around the priesthood, just take a quick flight from Buffalo to Detroit where Archbishop Allen Vigneron and his cronies in the chancery have known all about Fr. Larry Ventline for quite a while.

While not being one of the five priests actually arrested in the Michigan AG dragnet a week back here in Michigan, he was singled out nonetheless to have his counseling license in the state revoked.

The reason given — or rather, reasons?

He was mentally unfit to be a counselor, deceived the public into thinking he was more qualified and degreed than he actually is, had not kept up with his own important mental health sessions and, oh yeah, that he'd been accused of sodomizing a boy in the sacristy at least three times.

That's all coming from the Michigan state attorney general.

But besides all that, even if — and it's a big if — Archbishop Allen Vigneron had no knowledge of any of that he surely knew the worst-kept secret in his presbyterate that Fr. Ventline was a gay prostitute.

He routinely advertised his services as a masseuse in local gay bar magazines. He advertised that he would do the massage with or without clothes. And of course he got paid — $65 an hour was the fee.

Given the high number of homosexual priests in the archdiocese of Detroit, how could they not know? They all run in the same circles; they go to the same parties and all that.

But even more than that, when Vigneron was an auxiliary here, he, and every other auxiliary bishop as well as the papal nuncio, were sent the information about Ventline.

Of course nothing happened to him. In fact, Vigneron even gave him an official profile position as his personal spokesman on interfaith matters until the Vatican was notified again as recently as 2012.

But Ventline was so well ensconced in the gay scene in the archdiocese that he has publicly stated he even ran into former Detroit auxiliary John Nienstedt in a local gay bar just across the Detroit River in Canada.

Ventline says Nienstedt recognized him instantly and waved him off.

Not one bit of this any kind of secret. Articles were written about it back in the day. Many of the clergy knew all about him.

And yet, because he was gay, nothing happened to him. He was allowed to continue in active ministry right up until it all became too public just a couple years ago.

Of course, in the archdiocese of Detroit where Cardinal John Dearden ordained and consecrated gay men by the boatloads, none of this could be surprising.

Detroit was in a number of ways ground zero for the gay infiltration into the Church in the United States, and many of those men are still here in senior positions.

Others were and have been consecrated bishops and spread to other parts of the country, advancing the homosexual hive.

Here in the Detroit archdiocese, a group of mostly homosexual or homofriendly priests who call themselves the "Elephants in the Living Room" are well known by not only scores of other clergy as well as chancery officials.

They are also known explicitly by Archbishop Vigneron. According to the minutes from their own website, they have met in person with Vigneron and voiced their disagreement with Church teaching on nearly every point of moral teaching — homosexuality, contraception and so forth.

The minutes from the meeting reveal that Vigneron — and for the record, he too was ordained under Dearden — did hold to Church teaching with the Elephants but nonetheless allows these heretic homosexualists to remain in their pastorships and continue to deceive the faithful.

Some of these men are the ones who offer the local homosexual Mass which Vigneron refuses to shut down after more than 10 years as archbishop here, scared as is he is of them, as publicly revealed by his own seminary faculty member Dr. Mary Healy at a Q&A session following a conference last year.

At this point, not only here in Detroit, and Buffalo and many other places, some very pointed questions need to be asked.

First, why don't the bishops just come out with it already and admit their dioceses have loads of homosexual men in their priest ranks? Any Catholic with a pulse who still cares knows it anyway.

Second, does that mean that the local bishop thinks homosexuality is OK? Is this why so very few have even made a peep about James Martin?

Third, if they do think and know all this, why are they being so secretive, trying so hard to keep it all under wraps?

Fourth, since you all do want to keep it under wraps, why is that? Is this why so many of you so detest Church Militant and others, calling us demonic and possessed, because we are calling you know what on you all?

The U.S. hierarchy is polluted up one side and down the other with homosexual men and those sympathetic to them and the agenda.

It's why so many of them are so down with the Democrats and always pulling for them, pretending they care for the poor and immigrants and the climate.

They don't give a rip about the poor; just look at how they live.

They don't care about immigrants and the wall, most of them live behind walls the U.S. Army would have difficulty scaling.

And the climate issue is just the cause de jour, and they go along with it because that's what their sodomy-embracing Democratic pals embrace.

Just come out with it already, gay bishops. Admit it all.

You cover up and lie about homosexual child rapists within the clergy because that truth is too close to the truth of the larger number of you and your priests who are active homosexuals, or at the very least sympathetic to it.

And why do you want it kept so secret? Because it's hard to ask the laity for hundreds of millions of dollars if we know it's going to support the gay lifestyle.

Pray these men will repent and dump this gay garbage now. 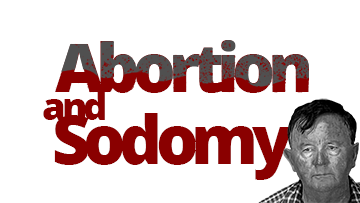 Abortion & Sodomy
How do the bishops handle each of these?