Because this is no way to run a candy store.

The outrage which has erupted against Detroit Abp. Allen Vigneron and his archdiocese following the shameful manner in which Fr. Eduard Perrone was publicly maligned by his staff is reaching viral levels in the Catholic blogosphere.

In fact, the entire case is opening up the floodgates on questions of just how dioceses are being administered.

Multiple clergy from around the country are reporting that their bishops are little more than figureheads — even puppets — being controlled by their lawyers and PR firms and marketing agencies, all because they are afraid to do anything which would endanger the golden goose of their financial appeals or threaten a lawsuit or bring about bad publicity.

So they simply rubber-stamp whatever lawyers or marketeers or PR gurus tell them.

And there appears to be a "semblance of truth" to these claims. They are, as the bishops themselves say all the time, "credible." Why? Because there is precedent.

Remember back in 2002 when the first round of the homopredation crisis broke in The Boston Globe?

One after another, bishops fell back on the ridiculous notion that they just listened to the experts about readmitting largely homopredator priests into the parishes.

In other words, they scapegoated the psychologists and therapists.

Well, it seems like absolutely nothing has changed as all the highly paid experts are running the show, with the bishops signing off on whatever is dropped in front of them and of course approved by their incompetent staffs.

Circling back to Detroit and the fiasco surrounding the charge against Fr. Perrone and the handling of it by the archdiocese, the official statement handed out by the archdiocese had to have been approved by the expensive legal firm of Bodman, yet nowhere did the most expensive legal firm in the state of Michigan give one consideration to the reputation of Fr. Perrone, nor did they apparently even raise the issue to Abp. Vigneron.

But they did recommend that a public release be issued to the media — a release that was heavily quoted in stories all over the world, to a readership and viewership of well over a hundred million people.

As we reported Yesterday, even Fox News ran an extended ticker, virtually quoting parts of the release word by word.

But relying on "experts" whose only concern is limiting financial liability is not isolated here in Detroit to just throwing priests under the bus. It also extends to money-grabs.

In view of the disgust over how Fr. Perrone was treated — meaning "no due process" — various Detroit insiders are now contacting Church Militant spilling the beans on other ways in which the archbishop is being led around by the nose by his cadre of "experts and staff."

Take, for example, the recently announced money-grab called "Unleash the Gospel" recently reduced from fleecing the flock of 220 million to a mere 190 million.

Church Militant was very recently shared with some of the breakdown of where the hoped-for 190 million would be spent.

First, about $22 million is slated for, get this, "nourishing disciples and empowering outreach to disciples."

No one really knows what the heck that marketing language means.

Here's another: Abp. Vigneron and his team are going to spend $13 million on "a Spirit led granting program ... to create joyful missionary disciples."

Did we mention that the international company running the show on all this and calling the shots, CCS Fundraising, which also raises tens of millions for Lutherans and Anglicans, is going to walk away with nearly $20 million.

But the archdiocese doesn't broadcast that too loudly; they certainly don't read press releases from the altar of the archdiocese's parishes when they are asking for your money.

It's outfits like this that sit down with bishops all over the country and decide which parishes are going to close and get sold off — meaning, scattering the patrimony of the Church to the four winds.

But again, you never hear about this, no one at the chancery ever gets on the phone and blabs to the Associated Press about their own fleecing of the flock.

Likewise, Abp. Vigneron and his cronies downtown, while happy to break all sorts of protocol and recommendations of the even the Pope himself, they will never be issuing press releases showing their swanky condo outfit down in the Cayman Islands.

Yep, the archdiocese of Detroit owns a luxurious condo on the island known for being a financial haven for off-shore accounts.

Locals tell Church Militant that not infrequently are there parties and so forth going on down there with assorted bishops and clergy dropping by for some fun. But, you won't see that story running as a ticker on Fox News.

The amount of duplicity and rot has two dimensions. What Detroit plots to keep from the public's eyes and what the archbishops and his lawyers and staff are perfectly willing to broadcast to the world.

This is wicked, reprehensible behavior on their part — disgusting.

They fleece the flock, routinely.

They bash a well-respected traditional priest without even so much as letting him claim his innocence after more than a hundred million people have considered him guilty; and for extras, they whoop it up at a condo in the Caymans they fail to write any press releases about.

And, oh yeah, they simply ignore the Pope's counsel to not release the names of accused priests where nothing as of yet has been determined.

Pathetic, revolting, disgusting — take your pick. This is an out of control, unaccountable, uncharitable, unjust circus, and that's apparently the case on just a normal day.

All over the country, innocent priests are having the bishops' charter for homopredator clergy weaponized against them, being punished and flushed down the toilet for the simple "crime" of believing the Faith and trying to help their flock get to Heaven.

Just exactly who's running the show in the chanceries, anyway? 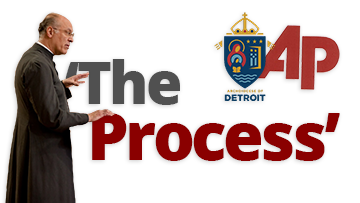 'The Process'
Of destroying faithful priests.