We see a phenomenon occurring more and more these days — so much so, in fact, that it's been given a name: Karen.

It's the moniker applied to those people who act morally superior to others, not based on actual moral things, but substitute issues like chasing after you, insisting you have to pull your mask up over your nose because you're killing people if you don't. The Karens of the world monitor everyone else and make sure you are "woke," believe like them and act like them.

And — here's the critical part — they are completely insistent on it. You must conform. If you don't, there's something wrong with you. You have no regard for your fellow man, and they make it their business to make sure you know that.

What's interesting about this phenomenon is that Karen will pursue her desire to make sure you conform with an almost religious zeal. Karen's actions are dripping in moral outrage and indignation: "How dare you not pull up your mask or drive over the speed limit or not come to a complete stop or ride a bike or not recycle. Lives are at stake! You're destroying the planet!"

By now, we've all encountered Karen. The depiction of Karen in the common mind is an out-of-shape, middle-aged woman who darts around in dramatic fashion making everyone else's business her business. Back in the day, we used to call these people nosy busybodies. But in the current zeitgeist, the nosy busybody has morphed into the morally superior, socially conscious witch who demands you conform.

Karen long ago abandoned actual morality, particularly in the arena of sexuality.

So what's behind all this? Well, let's go back to that aspect of religious zeal. Karen only thinks she's morally superior to you because she's driven by a guilty conscience. Karen long ago abandoned actual morality, particularly in the arena of sexuality. But deep within the human psyche is the awareness of right and wrong. As much as the culture wants to pretend it rejects the notion of objective morality, it can't. Common sense, natural law and lived experience all reveal there are moral certainties.

There is a list of absolute evils which should never be done as well as moral goods that should be done. But the culture lives in a dysfunctional state. It knows good and evil exist, yet it performs the evils, blesses them, enshrines them and eventually makes them "good."

Well, that doesn't leave any alternative other than to turn the goods into evils. So the good gets demonized and evil applauded. But still, inside, there is no escaping the truth that, for example, abortion is the killing of a child. So an additional set of goods must be introduced to tip the moral scales, so to speak.

This is where climate change, immigration reform and keeping that mask over your nose all come from. Karen knows that, internally, she supports and embraces what is actual, objective evil, so she creates this entire substitute morality and then seeks not just to convince you of it, but to impose it on you.

Remember, back in the day, when the Left was finding its political footing? They used to accuse faithful Christians of wanting to impose their morality on the country. How the tables have turned. No one in the Christian camp ever had the zeal that Karen has, chasing you down supermarket aisles demanding you accept her morality. It's like the Salem Witch Trials in reverse, with the witches running the court.

Let's just call this what it is: It's the necessary consequence of what happens when enough people reject natural morality and need to replace it because human nature cannot be altered. Karen sees her role as the enforcer of the new morality, and she's going to make sure you accept it, come Hell or high water.

What the new morality has done is create a scenario where there is a pretend care for human life — climate change, kids in cages, helping the poor, all of it looking good on paper. But the truth is that the motivation for the pursuit of these has nothing to do with concern for human life. But to Karen, it makes her feel like she cares for human life.

Karen can't support abortion and euthanasia and cover for those evils without pretending to care for human life in some other venue. So the Paris Climate Accord or BLM demonstrations or wearing the mask or getting the shot now move to the forefront and are even elevated to the most important causes.

Meanwhile, actual human lives are snuffed out at the rate of 3,000 per day at the local abortuary. But you won't find Karen standing in front of any of those killing centers; that gets way too close to her internal conflict.

Even though Karen pretends to care for humanity, she actually has very little compassion, sympathy or mercy. She has a deep-down rage fueled by her guilty conscience. But now, because of the trumped-up COVID crisis, she has the backing of the State to reveal her true self.

So she calls the police if you have more than one person in your backyard for a barbecue; calls the local health department if a waiter has his mask below his nose; will walk across the floor of the local gym to remind you of your duty to work out with your face covered up like a mummy; and looks at you suspiciously if you aren't driving around in your car, alone, with the windows up and a mask on — like her.

She's always lived in a state of cognitive dissonance because of her corrupted conscience, but now she has authority and power granted to her by the State to vent her underlying anger — and you are the target. And, despite the female name, Karen can be an emasculated 20-something male, a woke human-resources department head, a sissified coworker. Karen comes in all shapes, sizes, ages and in either sex.

The problem here for Catholics is this: Way too many Catholic clergy are also Karens who are dodging actual morality and substituting it with cultural morality, which isn't really morality at all. It's only the appearance of it for the dimwitted or the willingly naive and complicit.

In the Church, moral monsters elevate heresy to the level of good, making phony appeals to justice over issues like gay marriage, women's ordination and poverty. Nothing ignites the Catholic Karens like those issues, and that includes all the "Bishop Karens" out there — and there are many of them.

Way too many Catholic clergy are also Karens who are dodging actual morality and substituting it with cultural morality.

Bishop Karen and Cultural Karen each pray a litany, and they demand you pray the same phony litany. It's just that Bishop Karen dresses it up in all kinds of religious-sounding language that has nothing to do with God and His laws at all. Make no mistake, Karen is an existential threat to not just your body, but also your soul.

She may look sloppy, or out of shape, or have a loud, domineering approach, but make no mistake: If Karen has her way, you'll be in jail and out of the Church because you just don't understand. You're a Trump supporter or a Christian conservative who secretly is a domestic terror threat, and Karen is going to hunt you down and make sure you aren't hanging around to make her feel guilty.

Karen, ultimately, is a killer, and she has you in her sights. 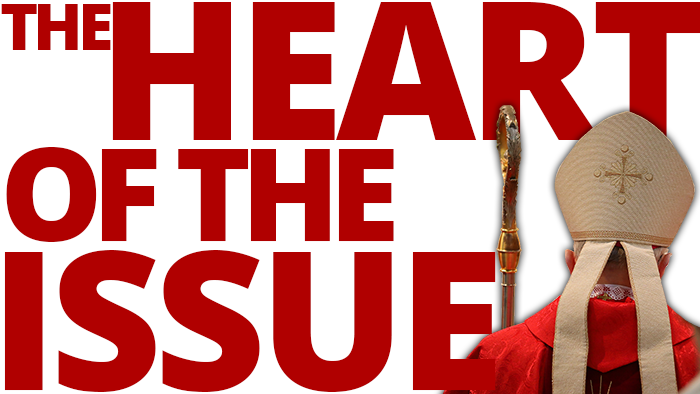 The Heart of the Issue
A pro-life priest speaks out.