The demonic is stalking the halls of the United States Senate.

The demonic is stalking the halls of the United States Senate, and you know this by the events occurring. Consider what is happening — a great spiritual battle has been engaged in the fight over the slaughter of children.

No one, including the demons, know how Brett Kavanaugh would vote on an abortion case that might come before him if he were ever to be seated on the U.S. Supreme Court.

But the best assumption seems to be that he would vote to either severely limit or even overturn Roe, and that would be an outcome that the demonic would rage against. So Kavanaugh — or anyone, for that fact — who even threatens the diabolical sacrament, must be destroyed at all costs.

The weapon that Hell is using to accomplish that end right now, in this time and place, is a radical feminism which raises victimization to a level of untruthfulness. That feminism has to only accuse, and everyone must bow to it — no questions asked.

We watched this play out in grotesque fashion this past week in the Senate Judiciary Committee as Dr. Christine Blasey Ford was permitted to claim anything she wanted in accusing a man of horrid behavior, and no one was allowed to challenge anything she said without being tarred and feathered — even in the face of not one single person corroborating what she said, some worthy evidence actually contradicting her and some points of her testimony that were a little incredulous.

On this point, the memo of Rachel Mitchell to the U.S. Senate has been released and it absolutely tears Dr. Christine Blasey Ford's testimony to pieces — a devastating 5-page critique which stops just short of calling her a liar but points to loads of inconsistencies, improbabilities and contradictions in her story.

Yet one gets the feeling that the facts asserted by Mitchell will be completely ignored because the satanic has created a climate where the intellect — which is ordered to truth — is now subject to a world of emotions where tears matter more than facts and feelings register as more credible than veracity.

All that matters is how someone feels.

This is a spiritually dangerous place for a culture to be, for a people to arrive at. An entirely new paradigm for judging right from wrong, truth from falsehood, has now reached the highest levels of government.

To be truthful, this outcome has been in the works for a few decades, but now it has been achieved by those who have no supernatural faith.

If you listened, not even that closely, to not only the testimony but especially the thousands of hours of spin and commentary by talking heads, almost the entire conversation was about how each one seemed — did they seem believable?

In a phrase, who cares? It isn't about judging how either seemed but about what they said, backed up by facts or not. And in this case, not only is there a woeful lack of any evidence surrounding the testimony of Ford, there is actually just the opposite.

And it doesn't matter a lick, as the Democrats claim, that this isn't a court of law, there are still certain earthbound realities that apply.

Like, for example, any woman who claims sexual assault must automatically be believed — says who? There is a very big difference between respecting the claims and seriously listening to them so that they can be weighed on their merits, and immediately jumping to believing them.

Why? Because to immediately believe the claims uncritically means a man is instantly condemned. That is unjust, pure and simple. It's bigoted.

It is, as Hawaii Sen. Mazie Hirono said, a case of men being told to just shut up because they are men. This is what radical feminism looks like when it is victorious. Men must become subject to the feelings and emotions of extreme feminism, and they are never allowed to respond.

Just look at what happened to outgoing Republican Sen. Jeff Flake in the elevator as a number of women cornered him and accused him of not respecting them. Amidst the shrill cries and loud shrieking, Flake was brow-beaten and silenced, not daring to say a word without it being thrown back in his face.

How does he know these protestors were not George Soros paid activists sent to the capitol to raise Hell?

How does he know they weren't Planned Parenthood employees sent on a similar mission? And even if they were truthful and sincere, why does the volume of their shrieks drown out truth?

If they or Dr. Ford were indeed being truthful and something did happen to them, why does it follow that Brett Kavanaugh is automatically guilty the guilty one and must pay and endure a crucifixion? Because tears are shed and wailing and lamentations are explosive? How do the two relate?

What about the tears of Kavanaugh and his wife and their daughters? Do those not matter? Do they not deserve consideration? A person "considers" with his or her intellect, not emotions.

A person feels with their emotions but thinks with his mind and intellect. None of that is happening in this case and there is one major reason: Because the culture itself has been conditioned to substitute thinking for feeling. That is diabolical because a person first comes to know God, to consider the divine, in their minds, to think on the things of the supernatural, to consider the first principles.

How one feels about these has no bearing on their reality. They are either true in themselves or they are not. It is the work of the diabolical to supplant the intellect with the emotions. That's what happened in the Garden of Eden, and it's what’s been happening throughout all of humanity's sad history.

It's how the gates to Hell were first opened to humanity and how they have remained open all these millennia. That's what's at stake here as much as anything else. Which will win out, truth or emotions?

Down deep, that is what has a nation enraptured by these proceedings — the gigantic battle between truth and non-truth. 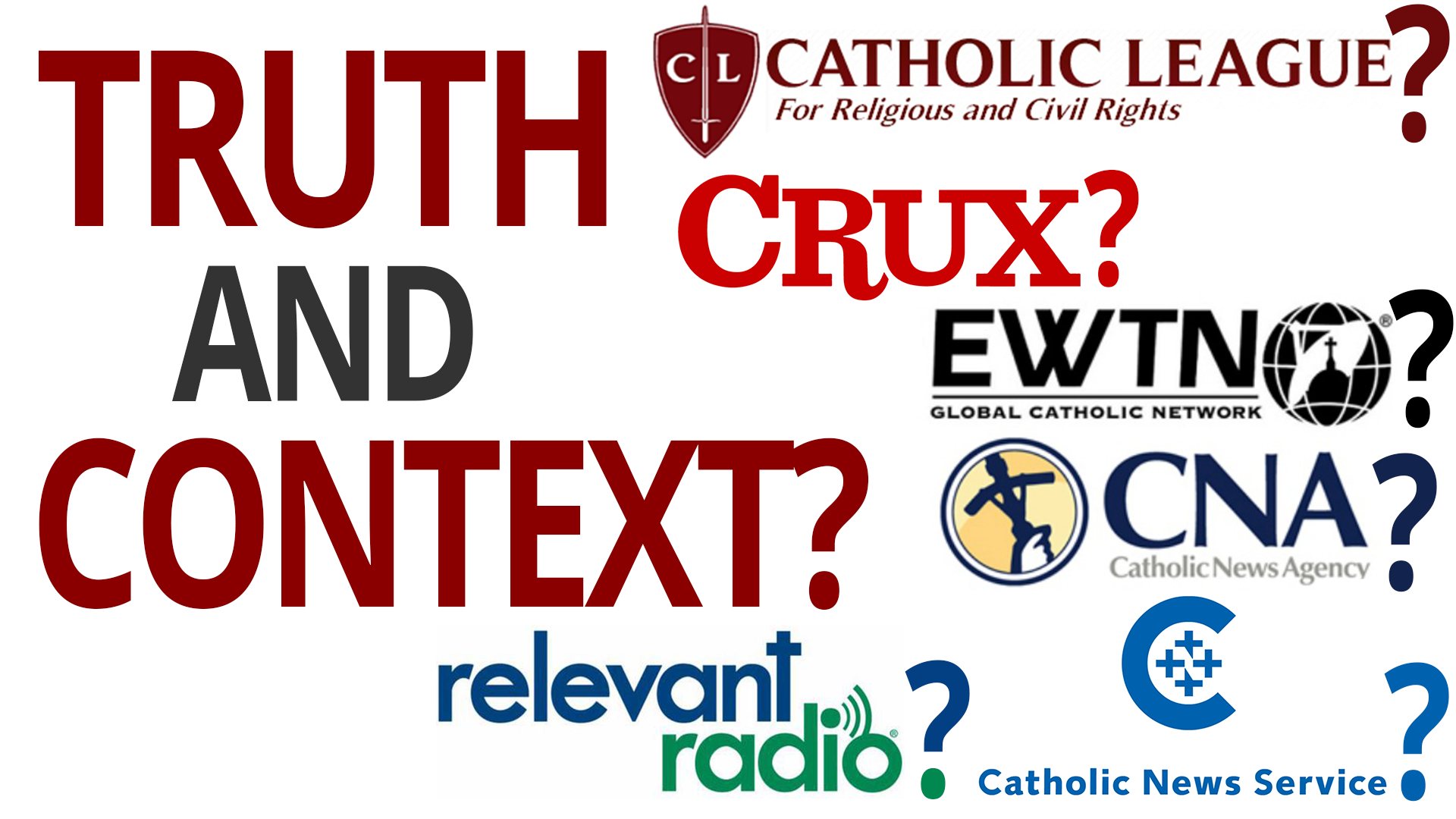 Truth and Context?
They matter.