Kept in the Dark

But the light always shines through.

Continuing our week-long look at shady dealings and extreme lack of transparency — again brought to you by the old guard at the archdiocese of Detroit — earlier this semester, St. Mary's Orchard Lake prep school in Metro Detroit abruptly and quietly dismissed its psychologist, Dr. Thomas Kaiser.

Within a short amount of time, all references to him were scrubbed from the school's website, Church Militant having been able to gain this image prior to the scrubbing. The case created some controversy and not a few questions.

Kaiser had been at the high school counseling various young men and teenage boys for about 18 years, so his sudden departure, with no real explanation, raised a few eyebrows. But the story is much more than meets the eye.

Kaiser had been a priest in the 1980s and early 90s in the diocese of Gaylord in the northern part of Michigan's lower peninsula.

During his time there, a 20-year-old seminarian, Charles Blanchard, filed a lawsuit against Fr. Kaiser and the diocese of Gaylord, as well as three parishes where he alleged that Kaiser, who was his supervisor in the parishes, forced him to have sex with him or lose his job. The sexual intimidation and extortion went on for nearly a year.

All of this is detailed in a September 1992 Detroit Free Press article which states that when Blanchard eventually informed the diocese of the nearly year-long harassment, the diocese forced him to resign his post.

Kaiser went on personal leave on Jan. 1, 1993. It's not clear as to his final disposition, whether he applied for and left the priesthood, was dismissed from the clerical state or merely walked away. What is clear is that seven years later, he showed up at Orchard Lake St. Mary's Preparatory school in Metro Detroit and became the school psychologist. And here is where things get interesting and involving the archdiocese of Detroit specifically.

First, the school never informed parents of Kaiser's background and lawsuit when he was hired or that he had been a priest of Gaylord. Why they didn't do that is because then-Detroit Cdl. Adam Maida and Gaylord Bp. Patrick Cooney cooperated in keeping the full story a secret from the school. This is not surprising, as they worked to cover up for Fr. Gerald Shirilla, another notorious pedophile you'll hear more about later this week.

Cooney was bishop of Gaylord when the lawsuit was filed in his diocese in 1992 and had previously been an auxiliary bishop of Detroit.

The two, according to sources, arranged for the past information to be hidden and the school kept in the dark.

It's extremely likely that Kaiser's employment application did indicate he attended seminary and worked as a priest, given that schools must verify academic and work references. However, Church officials in Detroit and Gaylord intervened and covered for Kaiser.

The man who had been accused in a lawsuit of engaging in non-consensual sex with a 20-year-old seminarian for a year was initially hired to teach theology to teenage boys at St. Mary's in 2000.

By 2004, he had assumed the post of school psychologist, where young males were vulnerable to possible physical and emotional advances.

No accusations have surfaced, as far as Church Militant can find, that Kaiser did anything illegal, criminal or immoral involving students while at St. Mary's, but when the archdiocese of Detroit and the diocese of Gaylord covered up the facts to the school, they didn't know if something might happen — which is the first part of this story.

The second part of the story is this: St. Mary's did eventually find all this out earlier this semester and Kaiser is no longer at the school.

But during the discovery process, sources at the school tell Church Militant that St. Mary's officials reached out to the archdiocese of Detroit for advice on how to handle the matter. What they were told is shocking.

The school was advised to keep the information hushed up and the man who stressed that was the archdiocese of Detroit's communication guru, Ned McGrath, the long-time and trusted ally of Abp. Vigneron.

Does the archbishop know that his comms guy is quietly counseling a school in the archdiocese that came to them for advice, that they should do nothing — keep parents in the dark — about the documented past homosexual predatory behavior of their school psychologist?

Does he know that, the archbishop? Well, he knows now.

Does he know that his immediate predecessor, Cdl. Adam Maida, was part of a cover-up of information with a former auxiliary bishop of Detroit, keeping secret from the school that a man they were going to hire was a former priest accused in open court of sexual assault? Well, he knows now.

Does he know of his trusted comms guy's role in all this? McGrath absolutely knows this — all of it. He's the master cover-up artist for the archdiocese that makes pesky problems just "disappear."

It could have opened the school to all sorts of threats and dangers. The point is, no one at the time knew one way or the other.

The lack of transparency within the archdiocese is astounding, despite the unfulfilled promises of the archbishop and his leadership team that things are going to change — there will be a "new DNA," to quote him directly.

The silly, as well as extremely revealing, Madison Avenue-sounding slogan "Unleash the Gospel" that is printed on every paper, card, envelope, brochure and so forth has become a kind of official standard here in Detroit these days.

How exactly does an archbishop "unleash the Gospel" when the very people in charge now are the same people who imprisoned it in the first place, making its "unleashing" now necessary.

The archbishop should try unleashing the truth, before unleashing the Gospel. The archbishop recently said he "prays for the triumph of truth and transparency, and praying that it comes quickly." Well, Your Excellency, I hope this is the start of an answer to your prayers. You'll have to finish it by coming clean — and quickly.

Archbishop Vigneron has a choice. He can use this steady stream of multiple exposures by Church Militant of egregious problems with personnel under him as a motivator to actually do what he said he was going to do.

Or he can circle the wagons, call in the archdiocesan communications SWAT team, turn to counsel from men like Msgr. John Zenz who bears much responsibility for the disastrous state of affairs in Detroit with his twisted theology and his infamous vindictive politics, men like Ned McGrath whose default response is always to lie, threaten, bully or deceive, as we will see later this week in a glaring expose — his queen bee — Lory McGlinnen who essentially runs the archdiocese owing to her political connections to Vigneron's close clerical friends.

He can ask them, the ones who have helped create the very environment where this is business as usual, or he can take a long hard look in the mirror, realize he has about five years left to finally do something wonderful for the Church here, put the meat in his sauce and lay the groundwork for the man that follows him to begin a restoration.

If he does not follow that course, make an obvious change in personnel and policy, then he will leave Detroit in just a handful of years having accomplished nothing, absolutely nothing, during his 15 years, other than papering over his managing of the decline.

Do you love your sheep more than you love yourself and your corrupt staff? Better you hear that question on this side of the grave prior to your judgment. Better to be thinking about that, then what would be the best timing to launch a $200 million fundraising campaign you have waiting in the wings.

It's about souls, Your Excellency, souls — nothing else, souls. 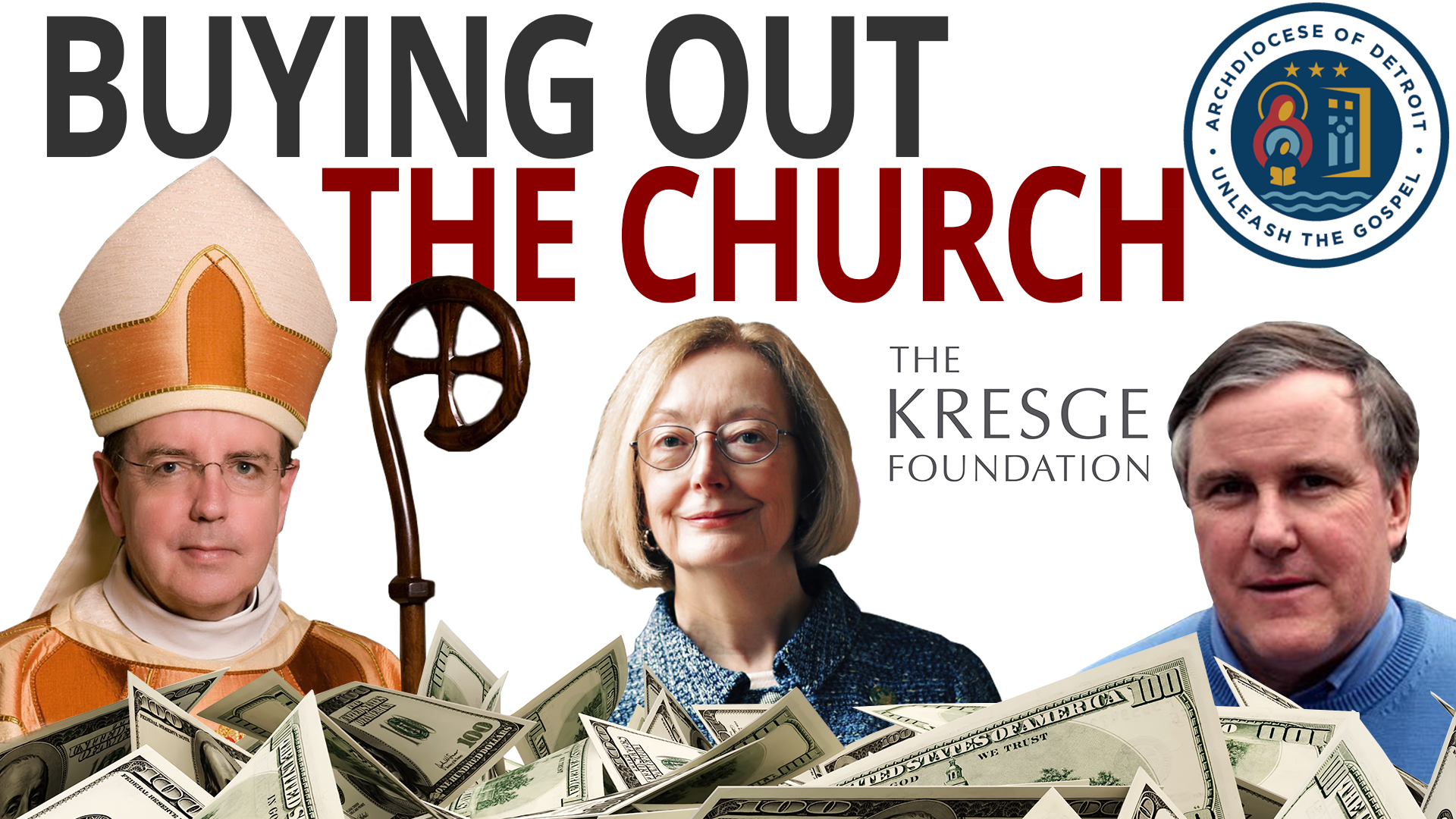 Buying Out the Church
And the BIG issues surrounding it.