The threat is too great.

Every major headline or wall-to-wall news story these days seems to surface some new social or cultural dynamic that has lain hidden for quite some time, and for the record, that's not a bad thing.

Given that the general trend of the culture has been a movement away from morality and the supernatural aspects of human existence, whatever can be brought to light exposing this is an ultimate good. For example, all the hoopla surrounding the Covington Catholic kids exposed the agenda of the liberal homosexualist media.

Granted, the story was not the first — not by a long shot — just think about all things Trump, Russia, Brett Kavanaugh, you name it. But there are always different dynamics and layers to all of this that are helpful if they are revealed and peeled back.

Such was the case with the Covington story. What was made visible in this instance was that pro-Trump, white, pro-life, young, Christian, heterosexual males are the enemy because they represent for the liberal media the last vestige of the Catholic culture they seek to destroy.

Now, to be certain, a good percentage of young, white, pro-life, heterosexual, Christian males seem to be catching on to the fact that they are being hunted and have been targeted for cultural extermination.

Significant portions of this demographic are the main supporters of social conservative social media superstars — figures like Ben Shapiro, Jordan Peterson and David Rubin, to name a few.

They, and others, touch on themes that resonate with young men — topics like the crisis in masculinity, the assigning of patriarchy as an evil, the threat to national identity that is rooted in a general misunderstanding of Christianity and so forth.

In these areas, the superstars point to societal upheavals and rightly point out the causes and implication — again, at least on a general level — that young guys see and relate to.

In that area, the Shapiros and Milos and Petersons and Rubins and so forth are to be commended. Heck, a handful of them do more to alert young men to this monstrous evil agenda than all of the nation's Catholic bishops combined, and shame on the bishops for living out their vocations in such a way that politically conservative gay men, libertarians and Orthodox Jews do a better job than they themselves do.

What a pitiful state of affairs for the bishops that this is a fact. But in the great moral vacuum created by the bishops' silence as well as their embracing of the liberal agenda because so many of them are emasculated themselves, a different type of danger has arisen.

While large chunks or what the social conservative superstar crowd says is true — some of it is not. Theologically — which, in the end, is all that matters — every one of them misses the mark, and from that perspective, the fact that so many young males are tuning in to their messages is dangerous.

For example, obviously, David Rubin and Milo — and in Milo's case, self-admittedly — their stances on homosexuality are wrong — period. In no way or form is being in a homosexually active relationship to be accepted or condoned from a Christian perspective — especially a Catholic perspective.

Young men, listen up, it absolutely does matter who you sleep with. And it doesn't matter if a social "conservative" who has it right 90 percent of the time says it's OK, he is still wrong — same goes for a social "conservative" who says abortion is wrong but contraception is OK. That may be the belief system or opinion of Orthodox Judaism, which is the basis for Ben Shapiro's mostly correct punditry, but on that score, he is deadly wrong.

Jordan Peterson as well is virtually always spot on, but he'll be the first to say he's not some marauding Christian espousing "Christian values" for the greater benefit of society.

Young men, you have been raised in a culture that has gone so far off the rails that any movement back to moral sanity looks like it should be cheered and supported uncritically.

It should be cheered and supported, yes, but not uncritically. Thinking people being uncritical is how the culture got into this current hellhole in which it now resides and is descending further.

While all of these largely political positions are correct in terms of policy, they all have a very large blind spot when it comes to fundamental morality. It is not OK that contraception is accepted as a good or at least a moral neutral. It is not OK to participate in the hook-up culture. It is not OK to just accept homosexuality as not a big deal.

The underlying attitude inherent in all of this is a spiritual libertarianism which denies that you have not just a political duty, but a moral obligation. It is not alright for each person to do what he or she wants as long as someone else isn't "hurt" by it.

No follower of Christ can ever assume that position in his understanding of the culture.

Before you were all born, and when I was your age, an intellectual corruption was spreading across the culture that said as long as what I do doesn't hurt anyone else, then it's OK.

And that soon morphed into what you are all, rightly, rebelling against, the claim by the Left that since the immoral act is OK and protected by law, that now you must accept it and even celebrate it. Your tax dollars should be used to pay for it. You should be charged with a crime if you oppose it.

What all the social commentator heroes miss in their largely correct analysis of this last part is that there is such a thing as objective morality, that a thing is immoral simply in itself and can never be condoned even if no one else is "hurt" by it. Everyone, every single person, is hurt by the mere acceptance of immorality, much less its enshrinement in law.

And it is on this very point that so many of the social media heroes you — again, understandably — celebrate have it wrong. Morality is a pure thing, just as following Christ, the ultimate moral authority requires a degree of purity that is perfect.

Make no mistake, it is dangerous to follow a person and become deeply invested in a person — even a person who is right nine out of 10 times. There is a concealed danger in that one out of 10 times because it is the door for further and eventual corruption.

Again, that's how we got where we are now as a nation — it's why you are hunted as the enemy. There's an old saying that sums this up very well: In the land of the blind, the one-eyed man is king. You need to move through your lives with both eyes open.

You young guys can give no quarter to incorrect perceptions of morality. Trump is wrong in his laissez-faire approach to the gay agenda and contraception. But he too is a product of never being formed in authentic Catholic culture.

And this is what you need to understand and think deeply about. You are only the enemy because you still move through the culture fueled by the fumes of that once-dominant Catholic moral culture.

That's why they hate you and want you socially exterminated. They want you dead because they see in you what so many of you have not yet recognized in yourselves, and that is in you are the seeds of their eventual destruction. 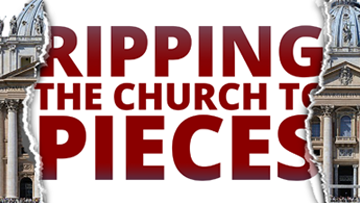 Ripping the Church to Pieces
And that has been the plan all along.