'Good luck with that.'

I'm Michael Voris, coming to you from the MECU Pavillion on the morning of the "Bishops: Enough Is Enough Rally," just as the gates have started to open and the crowd is starting to file in.

You're watching this on Wednesday, but we're recording it on Tuesday (obviously). So we've been on the ground here since Sunday, late afternoon — and I have to tell you, this whole bishops' meeting is, in a phrase, kind of creepy. Allow us to share with you some of our experiences with some of the bishops, as well as reports from the attendees who've had their own strange encounters.

First, almost every single bishop is wearing a mask (but practically only them). A few others here and there are, but almost to a man, each bishop is all masked up. It looks creepy. At the airport, when we landed, there was a bishop standing outside near us waiting for his ride. He saw us and turned around and walked the other way.

As luck would have it for him, his ride pulled right up in front of us and he had to head back toward us. I saw his chain and said, "Hello, bishop." I invited him to come over and pray the Rosary with us at our rally to bring an end to all the homosexuality in the clergy and hierarchy. He tapped me on the shoulder and said, "Good luck with that."

Almost every single bishop is wearing a mask.

Then, when we got to the hotel and got something to eat, Cdl. Seán O'Malley was there. I went up to him and said the same thing: "Please come and pray with us for an end to the homosexuality in the clergy and hierarchy." And he just looked at me with a weird stare and blank face. I said to him, "Well, Your Eminence, surely you can agree with that; everyone should be able to make that prayer."

Again, total creep out: He just looked at me and kind of stammered out, "Uh, oh, yeah, um, uh." Then some attendees told us they were near a table of about 9–10 bishops eating, and the entire conversation among them was about Church Militant.

In the lobby, security actually rolled in 8-foot-tall black barricades and established a tunnel for the bishops to get across from one side of the lobby to the other. Talk about "building a wall." Even professional long-time Catholics who have been coming here for years, who were standing next to me in the lobby when that happened, said, "What the heck is that? I've never seen that before."

Earlier this morning, a few attendees who were in the lobby and were saying hello came up to me and said, "Michael, do you know there are some security people over there taking a bunch of pictures of you and those around you?"

A couple of moments here, and there I was, standing briefly in the lobby alone waiting for some of the crew — and one security guy, in particular, was standing there not taking his eyes off me. Suspecting some weird stuff, I strolled somewhat out of his view on purpose, and, sure enough, he slowly positioned himself in such a way as to keep me in his eyesight.

I went back the other way, and he followed me back. After that, I had a stare-down contest with him until the staff I was waiting for showed up. Clearly, the bishops' conference, those who run it or are in charge of aspects of it or whatever, is obsessed with our presence here. And that is creepy — flat-out creepy.

Of course, this all makes sense when you consider that they did whatever they could behind the scenes, cooperating with the city, to prevent this rally from happening.

Bottom lining it, there are not a few bishops (as well as laypeople who work at the USCCB) who insist on portraying Church Militant as "dangerous" and "violent'' and a "threat" — a group that would turn physically threatening if the opportunity presented itself.

We've gotten plenty of cold shoulder from bishops in the elevators and hallways, and they know who we are because we're all wearing our Church Militant jackets. So stop for a moment and consider this creep factor: The crowd that never shuts up about dialogue only wants to dialogue with those who agree with them.

If you challenge their perversion, their theft of the Church's patrimony; if you try and provide a forum for their enormous panoply of victims, they want nothing to do with you. They try to silence you, paint you as a threat, sic lawyers on you, security personnel and so forth.

The crowd that never shuts up about dialogue only wants to dialogue with those who agree with them.

Too many of these men and their staffs are obsessed with worldly power and consumed by their egos. They know we don't pose any physical threat — in any way shape or form. But see, they have to portray that phony picture so they can remain aloof and unengaged.

So it's only fitting they are all hiding behind their masks. They cover faces but not the blackness in their souls. They promote sacrilege of Our Lord's Body and Blood, directly or indirectly. They are virtually silent about the largest holocaust in the history of humanity.

They cover for evil homopredator clergy preying on vulnerable victims, minors and young males. They hammer out secret deals using your money to cover up their sins and crimes. The list of their evils is breathtaking, yet we are the ones who they need "protecting" from.

There is no joy with these men. There is no image of Christ in the vast majority of them. It's a wicked bunch who come here and spend a million dollars of your money, accomplish nothing and go back home. There are a small handful, very small, who know this is all true and very quietly indicate that to us. But the homosexual cabal here ensures that tiny number remain overshadowed.

We came here today to pray for these men, these Judases, that they see the light and feel deep remorse for their sins so that they will repent and save their souls. But we also came to shed light on their evil, to accuse them before the Church and expose their deeds done in darkness.

We cannot say any more emphatically — bishops, enough is enough. 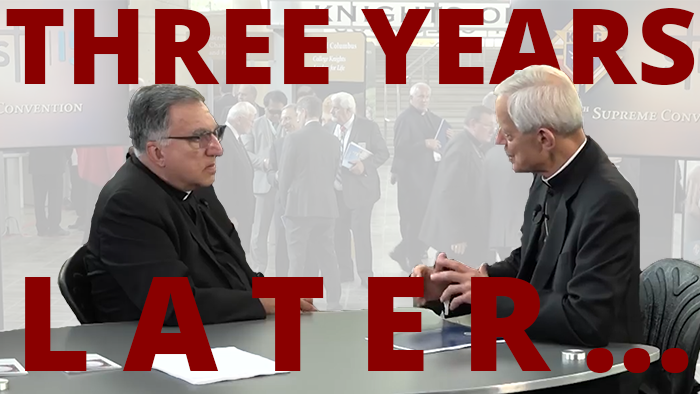 Three Years Later
And what has changed?