And my people perish for lack of it.

May 20, 2021  0
Podcast Available for Premium Subscribers

Father John Hardon, Servant of God, once described the media in this country as "Luciferian." He was spot-on because the media outlets do the work of their father, the Father of Lies. They spread error — not just mistakes — but actual willful errors to confound and confuse good people into accepting an agenda fundamentally opposed to the truth.

None of them is immune from this, and that includes Fox News, as we saw on election night and following. As a very quick aside, regarding Fox, what you see at night during their prime time is not Fox News. Fox News is largely driven by reporters like Chris Wallace — disingenuous liberals masquerading as journalists. The fact that Fox News isn't quite as bad as the others doesn't make them good or reliable. It just makes them not as bad. And as a further aside, that has nothing to do with loving the truth, but everything to do with money. Fox knows and understands that a large, politically conservative voting bloc exists, and they pander to them — at least more than CNN does, for example.

If the Catholic Church is the fullness of the truth, which it is, then that needs to be given a voice and brought to people.

But moving on, in the Catholic world, there needs to be a counter to all that, and that is what we have and continue to build here at Church Militant. If the Catholic Church is the fullness of the truth, which it is, then that needs to be given a voice and brought to people.

Specifically, in the realm of news and current events, the Luciferian media has made gigantic strides in corrupting people's intellects through its expert "storytelling," its high production standards and everything that goes into making television.

This is precisely why Fr. Hardon called it "Luciferian." It all looks good, it's professionally presented and even deals with truthful information most of the time — just in a duplicitous way. Presentation, the look, the style, the personalities, the quality — all that goes into the packaging, so to speak. What that accomplishes, like a good presentation of a meal at a restaurant, is to soften you up to want to eat the entree. The entire experience in a restaurant is geared to make you have a favorable feeling about the food in front of you.

Presentation goes a long way. It serves the purpose of inviting the potential customer or consumer to want to sample the meal and to have an overall fulfilling experience. And if the meal itself is only just passable, all that packaging will still actually have the patrons coming back. That's how television news works. Package it up all nice and then serve up a portion of information (however distorted) that the viewer grades out as passable. And then, importantly, you get them coming back for more until they are a regular.

Until Church Militant rolled onto the scene, it seems no one in what passes as the Catholic "media" world understood this. Unlike the Luciferian media, we here at Church Militant understand that we have a duty to Almighty God to relay His truth — not a pack of lies — to the masses. But additionally, we understand that, like the Luciferian media, packaging counts for a lot.

You can announce the truth all you want, but in the arena of the media, especially competing against the Devil, if your writing is lousy, if the camera work is shoddy, if the editing is poor, if it looks bad overall, then an insufficient number of people will watch. As my mom used to say to me about my career in news, "Michael, it's the whole package people take in."

That is true, and it is the truth of that which Satan and his media allies have been so wildly successful at exploiting. They find sympathetic victims, and through writing, on-camera interviews, editing and so forth, conjure up an emotional response in viewers who then, after becoming sympathetic to the person the story is about, completely disregard their own intellects and become sympathetic to the agenda being pushed — like abortion, for example.

It has worked masterfully for decades. As the Marxist invasion of the educational establishment has served to soften people's critical-thinking skills, the takeover of the media has come at them like the second blow in a one-two punch strategy and gotten them to change their views.

And voilà, another one — meaning the intellect of the viewer — bites the dust, shot down, and in its place, another supporter of women's ordination.

Of course, what's left out of all of this is the truth. But that is precisely what makes the Luciferian media, well, Luciferian — truth be damned. There has, to this point, not been anywhere in the Catholic-media world even a response to this evil in the media, much less an answer.

Until now. In the wake of the stolen election, following up on our campaign and election coverage in the midst of the stealing and the refusal of establishment Republicans and courts to address the fraud, Church Militant made a decision to actually continue our election coverage in what we called our Post-Election Special.

We committed to producing that coverage every day until someone took the oath of office or it was a foregone conclusion. So for two months, that's what we did, right from this very stage behind me. We poured virtually all our resources into that, night after night, suspending almost everything else we do because it was that important.

The Luciferian media, sensing a near-total wipeout, promoted massive lies, and they did so with the help of various members of the Church. That needed to be combated, so we did. Those Post-Election Specials brought in thousands and thousands of viewers every night. We went professional, so to speak. Everyone in this room dedicated themselves to covering every single angle from every perspective possible because we understand this one point: The work of the demonic is carried out in every sphere of life, including politics — in this day and age, you could even say especially politics.

We understood (and we broadcasted) that what was happening was a takeover of America, engineered by anti-Christian forces committed to demolishing faith in Jesus Christ and His Church. Well, that was then. We kept airing our Post-Election Special until Jan. 6 when Biden, through cheating by Marxists and cowardice by Republicans and judges, officially secured the Electoral College vote.

However, that was not and is not the end of the story. It was the conclusion of a very horrible chapter, but it isn't over. To that end, we converted our Post-Election Special into our Church Militant Evening News, which comes to you live each weeknight at 6:30 p.m. ET and is then available on replay very shortly thereafter.

Church Militant realizes most people don't have the time to pore through dozens of hours of news and information every day to get a firm handle on all this evil so that they're able to tell family and friends and help them understand what's going on. That's why we do Evening News every single weeknight — to provide you the most reliable, expansive, no-holds-barred and truthful news you can get from an authentic Catholic lens.

What we have created is what you can call a "one-stop-shopping" media outlet for you. Give us 30 minutes a night, and we'll give you everything you need to know. If you can't watch us live, as we said, the replay is on the site and available for when you can watch.

It's fine to tune into Tucker or whomever — you'll get some truth there with clever writing, presentation and all that. But you will not and cannot get what you get from Church Militant, which is how all this is connected to destroy your soul. Even so-called conservative media, at the end of the day, is all about politics and ratings. We deal in salvation and correctly understand politics not as an end in itself, but as one of the foxholes on the battlefield for your soul. Granted, it's a very important foxhole, but only in relation to salvation.

This is what we mean by presenting the news from an authentic Catholic lens. Quality of production absolutely matters so people will give you a hearing, a chance. If we don't care about the quality of our own work, why should you? But we do care. In fact, we are meticulous about it. The Marxist media is incredibly good at what it does. It's why it has been so successful at corrupting a nation.

And here's a closing thought on all this: If media is not a major player in the spiritual war, then why has Satan pursued it so vigorously and captured it, turning it into his work?

If media is not a major player in the spiritual war, then why has Satan pursued it so vigorously and captured it, turning it into his work?

Catholics are far behind in many, many areas. We've been too docile, too quick to roll over and (incorrectly) turn the other cheek, too complacent, too "let God handle it," too willing to retreat from battle and confrontation and into a piety that is more excuse than genuine. When will we stand up and own the truth given to us and fight for it?

The Marxist media fights like mad to advance its lies, but Catholics refuse. Well, not here, no longer. There are lots of foxholes on this battlefield for salvation, and we have jammed our stake in the ground of this one, the media foxhole. Please join us either live at 6:30 or on replay each weeknight for Church Militant Evening News as we reclaim the world of media. 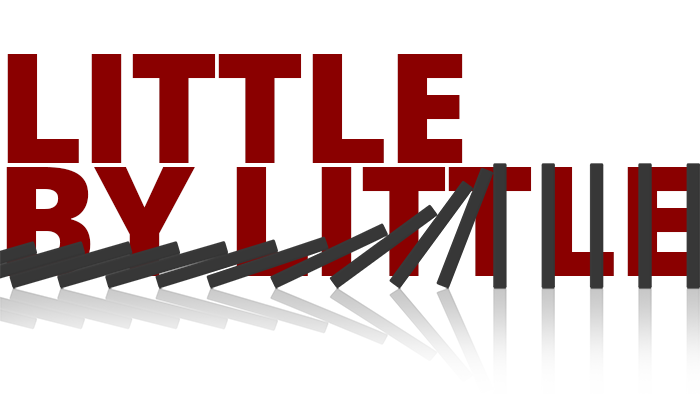 Little by Little
Goes the descent into Hell.