And fighting with everything we've got.

Things are really heating up in the spiritual war being played out in the material world. And never forget that this is indeed a spiritual war. We'd like to outline for you some of the battles in this great war where Church Militant is leading the charge, and we thank you for providing us the spiritual and material means to do so.

First up is Baltimore. It may not be ground zero, but it is a major focus in the war. Secular media is now taking more particular notice and reporting on it. You might recall that we were planning a prayer rally of 3,000 faithful Catholics just outside the hotel where the bishops' conference is taking place. Out of nowhere, the city canceled our prayer rally. The Baltimore Sun picked up the story, which was quickly followed by Fox News in Baltimore.

Corrupt government does not get to just lie about you, tie you to what they say is some domestic terrorist activity and snuff out your First Amendment rights.

The U.S. bishops had to issue an official statement saying that they knew nothing about why our rally was suddenly canceled by their good buddy Baltimore city solicitor Jim Shea. Shea is now forced to admit to the press what he told me privately on the phone, which is that he canceled it because he had "reports" (although he couldn't provide a single one) that Church Militant posed a risk of violence and that we were "tied to" the Jan. 6 events in D.C. Neither of those is true, to restate the record.

Well, the update for you is this: We sent Shea and the city of Baltimore a demand letter stating that we wanted them to reverse their original unfounded order and allow us to proceed. We had given them until a week ago last Friday to respond and reverse or we would sue them in federal court for violation of numerous First Amendment rights.

They did not respond.

We are now informing you that we have brought suit in federal district court. Last week, Fox News Baltimore conducted an interview with us on our upcoming filing. We are asking the federal court to issue a temporary restraining order against the city's unconstitutional order and to restore our right to peaceably and prayerfully assemble and freely speak our minds.

Corrupt government does not get to just lie about you, tie you to what they say is some domestic terrorist activity and snuff out your First Amendment rights. We expect a response from the court on our petition to restore the rally in very short order because of the timing, and we will let you know about that the moment a ruling is handed down. We are very confident that we will prevail, and many First Amendment attorneys, some really good ones, are also confident.

But we have also filed suit against Shea and the city of Baltimore because it's not enough to just restore us to the status quo. They need to be punished for doing this. That will wind through the courts for a while longer, so expect continuing updates on that.

Besides bringing federal suit, another way Church Militant is leading the charge in this spiritual war is through our recently launched Catholic Info Hour, one full hour of news and analysis through an authentic Catholic lens. With this, we keep you informed on the latest developments in the Church, across the nation and around the world, streaming online at ChurchMilitant.com every worknight at 7 p.m. ET.

So far, you are telling us that you love it. Thank you. This is our first step to an even greater presence as the go-to Catholic news and information source. And as a feature of that dynamic, we've ramped up our on-location reporting to bring you the biggest news stories of intense interest to faithful Catholics right from where they are happening.

We bring you on-site interviews and inside information straight from our crack reporters now traveling across the country to be "on the ground" to give you the facts — from McCarrick being arraigned in Massachusetts on criminal charges, to rallies of faithful Catholics demanding justice for persecuted priests, to faithful Catholics challenging the bishops' willful cooperation in the COVID craziness.

Church Militant is now able to increase its coverage from anywhere in the country. Likewise, we are assembling the best team anywhere in the Catholic world of men and women dedicated to the authentic Faith and its defense in the media — and that includes exposing the corruption of the U.S. hierarchy. In fact, it's necessary.

And further, only Church Militant is actually mobilizing and activating Catholics to do something besides sign useless online petitions. All over the country, we have thousands of active Catholics in our Church Militant Resistance who are getting straight into the action by coordinating with insiders and faithful clergy to plan public displays of, well, resistance to crooked and overbearing bishops.

But it's not just laity. Church Militant is also organizing hundreds of priests and deacons anonymously in our new Catacombs project. These are good and dedicated faith-filled men who have had it with the corruption and are responding in a way that protects them while still giving them a loud voice.

Our Spotlight investigations break new ground every time we air a new one and further expose not just the rot among the bishops, but the incredible depth and interconnectedness of the corruption.

It doesn't matter if we're battling politically or in the Church, Church Militant doesn't just report the news, we also make it and shape it. Our election night coverage was viewed by hundreds of thousands live and we are already gearing up for what will be the most important midterm election in the nation's history.

And Church Militant is the Catholic news source that has the inside track, with resources up and down the political world tracking everything Catholics need to know in the crucial showdown. In short, if it's news or current events and it has an impact on your eternal life or those of your loved ones, we are your resource.

Only Church Militant was telling you more than 10 years ago how intricately wed to each other were the Church and politics, and now we're all seeing just how true that is. This is our commitment to you: to keep you informed on the latest developments in the Church, across the nation and around the world. But all of this work is only possible by the grace of God, our viewers and the financial support of donors.

Unlike when the Marxists say that we're all in this together, we actually mean it.

If you love what we do and you want to see us continue providing you with even more authentic Catholic news and content, we invite you to become a monthly donor today.

We do the digging and the untangling of this massive web of deceit and corruption that is enmeshed in both the Church and the government so you don't have to. It's an awful lot, a full-time job for dozens of people. When Fr. John Hardon named the mainstream press the "Luciferian media," he wasn't kidding. And when Fr. Pablo Straub charged St. Michael's Media with bringing Christ to the internet, we took him and Fr. Hardon seriously. May God rest their souls.

So we are reaching out to you to ask for your financial assistance in becoming a monthly supporter, just like Mother Angelica used to do at EWTN before they went all squishy and soft after she was forced out by the corrupt bishops' scheming.

From Baltimore to Rome and to dioceses all over the country, Church Militant is leading the charge and asking for your support monthly by just clicking here.

Thank you in advance for helping us in whatever way you can. Unlike when the Marxists say that we're all in this together, we actually mean it. 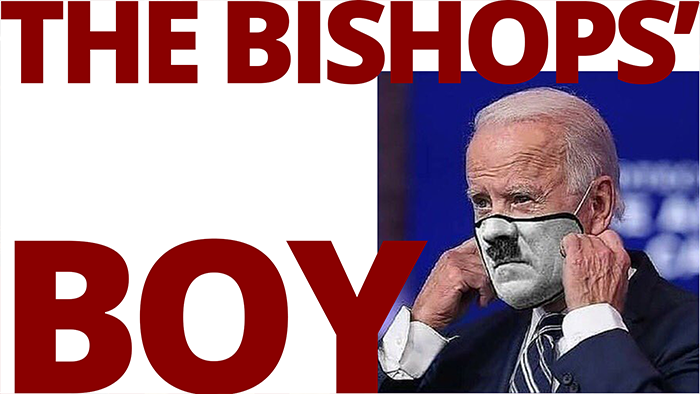 The Bishops’ Boy
He reflects them, and they reflect him.