Lefties in the Church

The Left are the offspring of the Demon.

By now, it's plain even to those with poor vision that the Church has been overrun by lefties, meaning those who have a Socialist, Marxist, Saul Alinskian, globalist worldview, who will stop at nothing from forcing their rigid, intolerant view of mankind down the throats of faithful Catholics. They started slowly at first, quietly getting their ducks in a row in theological centers and religious houses all over the Catholic world in the West. They set about to destroy the liturgy, Catholic education, Catholic theology and the entire Catholic culture that had once been named Western civilization.

In their ranks were some very notable personalities, from Theodore Hesburgh at Notre Dame, Joseph Bernardin in Chicago, Karl Rahner in Germany, Rembert Weakland in Milwaukee, Edward Schillebeeckx in the Netherlands, Cdl. Leo Suenens in Belgium, Hans Kung in Germany, John Courtney Murray in the United States, Cdl. Richard Cushing in Boston and Cdl. Roger Mahony in Los Angeles. The list of traitorous or weak clergy who have contributed to this disaster, purposefully or ignorantly, is mind-boggling.

What they have each and all managed to do is create a climate whereby Catholic identity has virtually been annihilated. The actions of those in the early days of destruction created the scene whereby Ven. Pope Paul VI lamented that the Church seemed to be in "the process of auto-demolition" — the pope's own choice of words.

From intrinsic evils such as contraception to homosexual behavior to funding evils in Third-World countries under the guise of social justice to political issues like supposed manmade climate change, illegal immigration and a host of other areas, the socialist forces operating from within the Church have joined forces with the socialist forces operating outside the Church. They have converged and made common cause with each other, and their common cause is the destruction of the Catholic Church.

They have brought in 50 years what heretic Martin Luther couldn't have brought about in 5,000: the complete end of Catholic identity. They are agents of the diabolical because they do his will — in prior years in the shadows and in these days completely in the open. They have rejected the teachings of the Church, even though they were ordained and consecrated to do nothing else but teach the truth of the Church and administer Her sacraments.

They have traded their souls for worldly acclaim, power and fleeting glory. What a most terrible fate awaits these aging men if they do not repent. How far beyond even description will be their agonies and tortures in the fires of Hell for eternity. This is why they ignore Hell in their public proclamations, pretend it's not real or pass along the anti-Christ idea that no humans go there. They have created an anti-Church to serve their anti-Christ in the middle of the Catholic faith.

There were two separate fronts in this war against the Holy Church — one a frontal assault, the other a fifth column from behind the lines, penetrating parishes, religious orders, chanceries, universities, seminaries, the episcopate and the devotional life. But while the two separate actions were going on, they were all part of one larger action by the Demon. But he has exposed himself, as he always eventually does, unable to contain his pride and his need to howl over his accomplishments.

He mocks Almighty God. He apes the Church of Christ, and in his great hubris, which he imparts to his offspring, he thinks he has won. He told Christ Himself in the apparition to Pope Leo XIII that he could destroy the Church. All he needed was more power and more time. God granted what he said he needed. And very shortly, it will be God's turn, so to speak, to strike down the Demon in such a devastating blow that the world will stand in awe.

Why do we think this? Because the Demon has unmasked himself, meaning he believes he has won. It is through the sins of homosexuality in the clergy and the embrace of sexual immorality and child murder among too many laity that he has accomplished his rampant evil. But his time is nearly up, and he himself is the one signaling it without realizing it. Michael cast him out of the angelic realm in eternity. Our Lady has crushed his filthy head, and in time it will be Her loyal offspring of whom She is Mother, given to us at the foot of the Cross, who will be used by Her to grind him down into the dust.

The passage from Isaiah gives us great consolation:

How you have fallen from the Heavens, O Morning Star, son of the dawn! How you have been cut down to the earth, you who conquered nations! In your heart you said: 'I will scale the Heavens; Above the stars of God I will set up my throne; I will take my seat on the Mount of Assembly, on the heights of Zaphon. I will ascend above the tops of the clouds; I will be like the Most High!' No! Down to Sheol you will be brought to the depths of the pit! When they see you they will stare, pondering over you: 'Is this the man who made the earth tremble, who shook kingdoms?'  (Isaiah 14:12–16)

Console yourselves, my fellow Catholics, in the midst of the Demon's celebration. Remember his soon-to-be realized fate. All that is happening, in a certain sense, had to happen.

The Holy Church may be in the throes of Her passion and soon be headed to the tomb, but it will not remain. We know the end of the story. Remain faithful. 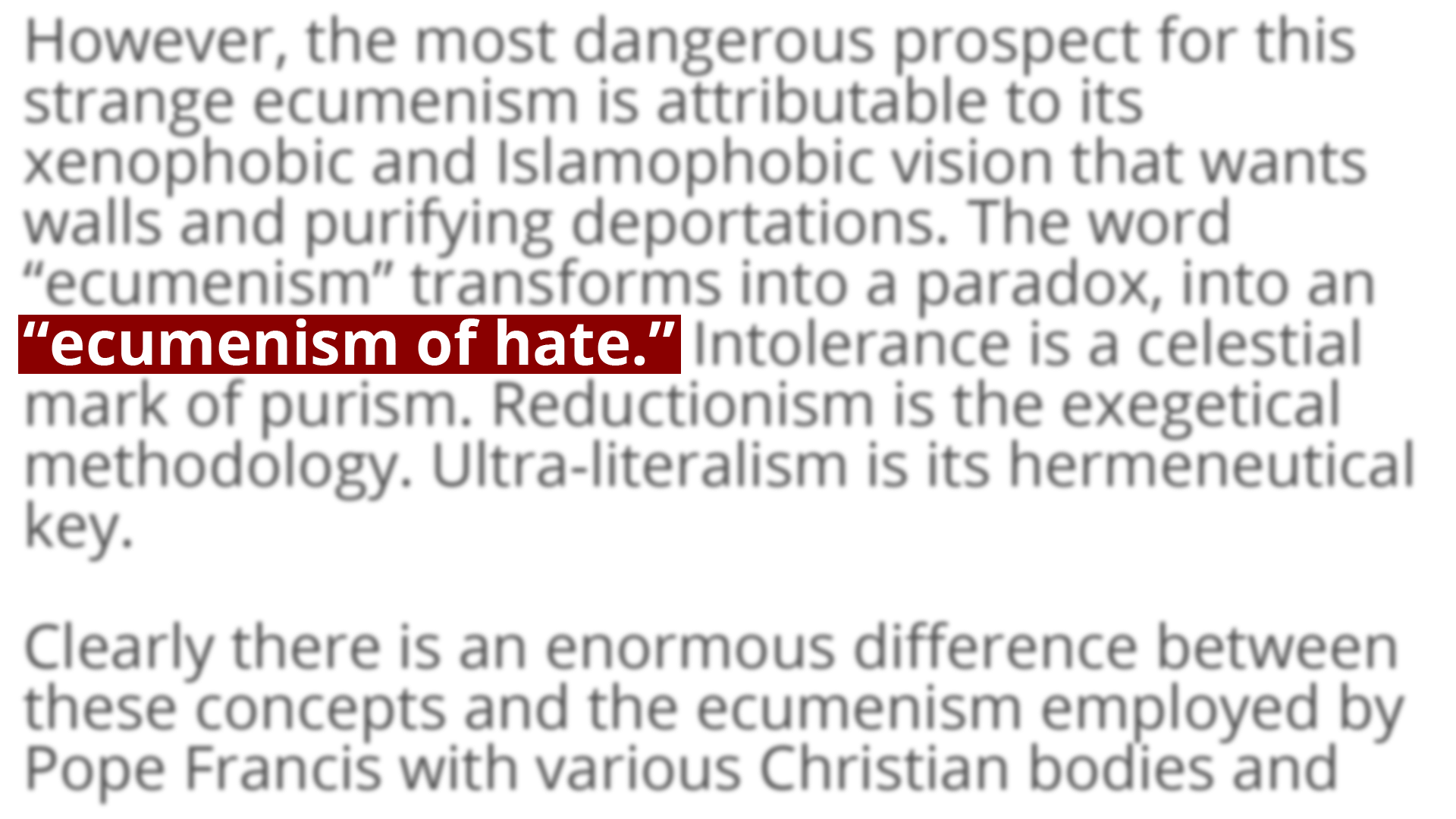 Ecumenism of Hate
The "hate" is all coming from the Left.