And fill the earth.

Good men and women, meaning lovers of truth, are starting to become more than angry. They are becoming enraged. What is becoming manifest in these days of the campaign is the gross lack of justice present in the Culture of Death.

Now, the reality of that certainly isn't a shock or really even news. These people kill babies without a thought or concern. It's hard to come up with a bigger offense against justice than that. But what is worth contemplating is the extent to which they will deny justice (ultimately meaning fairness).

Justice is rooted in truth. It is the virtue by which each is given according to what is due to him. In truth, everyone is entitled to be treated fairly. It's such a basic human concept that every little kid even knows about it from their earliest moments of consciousness.

What parent has not heard the non-stop mantra from their children, "that's not fair" in response to some perceived injustice? Of course, a child perceives fairness as being treated the same in terms of the same outcome.

The basic complaint goes something like this: "Little Sally gets a second piece of pie, so why can't I? That's not fair." Well, little Sally cleaned up her room like she was told. You did not. So you do not deserve to be treated the same.

That is justice. They both got treated fairly. But note — it was not the same outcome. Normal people of all political leanings don't like things being unfair. And notice, we said all normal people, meaning those who still have a sense of decency.

These people kill babies without a thought or concern.

What is manifest in this campaign is the lack of fairness on the part of the Marxist media — news media as well as social media giants. For example, look at the dueling town halls last Thursday. On the one side, we have the elitist treatment of Biden by those working feverishly to defeat Trump.

George Stephanopoulos (who was a Clinton White House staffer and who helped cover up Clinton's sex crimes) spent the night letting Biden ramble on and say whatever he wanted. More importantly, he posed almost no challenging questions, and when he did, there were no follow-up challenges.

On the other side, the female attack dog Savannah Guthrie was relentless in her interrupting, challenges, pouncing on Trump relentlessly, throwing everything he said back in his face and cutting him off repeatedly.

Now, as a lifelong journalist, I personally have no problem challenging (even relentlessly) a politician's responses or non-responses to legitimate questions. But what I and tens of millions of others have a huge problem with is attacking one candidate and covering the other in kisses. It's revolting, but that's what you get with Marxists.

All sense of decency and fairness goes out the window. And it's all being revealed, their hate for the truth (and that is what it is) — from Twitter censoring all stories about Hunter Biden's crimes (along with his father) to canceling any accounts that tweeted about it.

Compare the above to social media allowing Steve Scully to lie and say his Twitter feed was hacked, and then, when the truth comes out and he admits he lied, crickets. Compare it to Facebook censoring Trump Campaign posts but letting Team Biden claim whatever they want.

All of this is so manifestly unfair that you wonder if it might tip some of the undecided vote to Trump because, again, no one normal likes an unfair fight. Like so many things playing out in the culture at large — and the campaign specifically — we see this exact same dynamic in the Church.

Anyone who says the truth gets censored, cut off, attacked, ignored and so forth. Just ask the handful of faithful priests who have stood up to the Marxist propaganda from various prelates. Ask apostolates like Church Militant who are vilified by the Church establishment for revealing the ugly truth about their corruption.

The U.S. hierarchy is so thoroughly corrupt that they actually give you hope that Judas fared better than they will at their judgments. For example, if you are to believe some recent polls, President Trump's support among Catholics is slipping, with Biden leading 51%–44%.

But it can hardly be surprising. We have a revoltingly corrupt hierarchy who have either stood by in silence and let Biden present himself as a faithful Catholic or who have actually supported his bloodthirsty campaign.

Not one media organ of the Church of Nice has denounced this wicked child-killer.

Almost no bishop has said a blessed thing. Instead, the collective mitered class has obfuscated and remained deadly ambiguous on his evil. Indeed, they have said nothing about his repeated sacrileges, heresies and lies about his Faith apart from the political scene.

They don't have sufficient testosterone to say anything about him politically. They're morally, financially, doctrinally, liturgically corrupt — across the board. If the election goes south, it will be almost entertaining to watch the lot of them be rounded up by the State, which will happen eventually.

Of course, that presupposes that at least a few of them will suddenly develop a correspondence with the truth. In either case, they'll all eventually be imprisoned, and frankly, they'll deserve to be.

It would have been them, who, with their censorship and punishing of faithful Catholics (laity and clergy), will have been responsible for bringing down the judgment of God on this country — and by extension, the rest of the world.

There's no way to know for certain, obviously, but it is a possibility on the table that the world is being prepared for the arrival of Antichrist because a Biden win will usher in a worldwide victory for Marxism.

The godless elite will have assumed full power, and it will have been accomplished through the agency of a bunch of crooked homosexual men who seized control of the hierarchy decades ago and brought this all about.

A decent prayer at this point would be: "Heavenly Father, let justice rain down from Heaven." 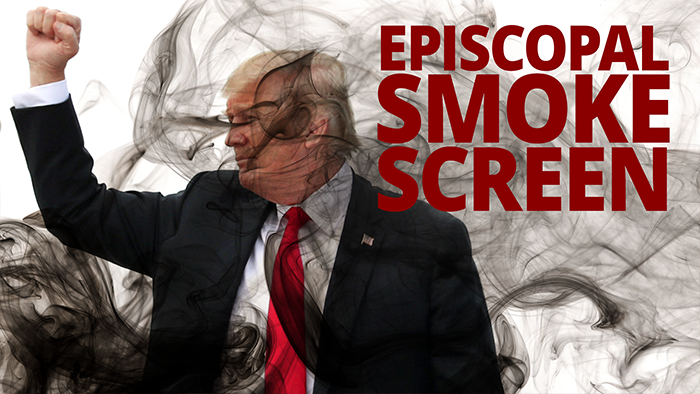 Episcopal Smoke Screen
It needs to be blown away.