Cuz we got somethin' to say.

It is now just a little more than 100 days before the U.S. bishops gather for their next big collective meeting — this one in Baltimore. You'll remember the last one in Fort Lauderdale where the topic came up of slamming the faithful with canonical penalties for supporting the nation's immigration laws.

It's a pretty safe bet you won't hear that craziness this time around. What it is likely you will hear is the wailing and gnashing of teeth over the horror of open sodomy and support of it and covering it up within their own ranks. The United States Conference of Catholic Bishops — the USCCB — is a joke, a bad joke, an evil joke. It needs to be disbanded. In fact, the last official act of that body should be its own dissolution this November. What this not-august body needs to do is come to fist blows with each other over this rot and sin and evil.

We know there are good bishops — we talk to them — who in no way support any of this sodomite business, but for whatever reasons have felt up to this point that can't really say anything to the big mouth liberals and dissidents who run the conference. Well, to those good bishops, you now have a duty, regardless of what happens to you, to start confronting this among your "brothers."

Take the microphone back, rip it out of their hands and tell these sinful cardinals to shut up and sit down. We and you have had enough of their procedure and process and parliamentary evil. Why don't you, not ask, demand that the ticked off laity who have plenty to say be invited in and address the group. After all, isn't Pope Francis all about getting the smell of the sheep on you? Isn't he about making a mess?

And if you think I'm being rhetorical or flip, I'm as serious as a heart attack, something you should all be praying in earnest doesn't happen to you anytime soon, before a full confession. The evil men among you need to be held accountable for their betrayal of the Faith, not just McCarrick, but all of you, who have overseen the ruination of the Faith, have the blood of suicides of young men on your hands, the destruction of families and souls.

You need to let in people, faithful Catholics who have something to say to you about the reign of spiritual terror you have inflicted on the Church. And you have inflicted it, all of you, to one degree or another, whether by silence or cooperation or concern over your career or shredding legal evidence or lusting after young males — minors or adults, all of it the whole kit and kaboodle.

You and/or your brother bishops have insulted the laity, repeatedly — not to mention lied about them — you have betrayed us, stolen from us, lied to us, deceived us, played us for fools, wrecked our families by causing no end of strife owing to your failure to teach, and the time has come to face the music.

The simple truth is your half-century-long cooperation with the sodomites within your ranks has caused nearly all of this, and it's time to face the music. You need to come clean and reveal all the others, and you know who they are. And we don't just mean the ones who are dead or retired, but the ones actively, right now, still doing the work of their father, the devil.

How could any of you sit there and with a straight face deny the right of the laity to speak to you, broadcast live, for the whole country and world to see?

And the only reasons we know about them is because it became public through the courts or the media, after you tried your darndest to cover it up. And you bishops and cardinals sat with these men, year after year, in meetings and conferences, sharing cocktails and small talk and all that — and you did nothing, you said nothing. You let them go back to their diocese and attack their sheep by ordaining more gay men.

The laity want a public profession, a public declaration from each one you, actually walking up to the microphone, one by one, for God and everyone to see, a public declaration that you are not a homosexual — practicing or not doesn't matter — that you are not aware of any in your midst, and if you have at any time in your careers aided and abetted this evil, by any means, or did you have knowledge that you should have pursued in the interest of serving and saving the faithful, regardless of the cost to you.

It's time for you, all of you to face the music. If you've done nothing wrong and have had no part in this, then it shouldn't be a problem. Your seminaries have become sanctuaries for homosexual priests to prey on young men, and you are allowing it. Your parishes have become sanctuaries where homosexual men come onto faithful laity, minors and adults alike — and you are allowing it.

Practically every major secular media outlet has outed your evil, The New York Times, The Washington Post, USA Today, Associated Press, Reuters and so forth. And when that lot is able to get the moral high ground on you, then you know the time has come to face the music.

We want to be present, eyeball to eyeball, so you can look us in the face, like men, and admit your wrong, and then what you are going to do about it. A crowd of thousands should descend on Baltimore and demand nothing less. Let us in! Let us in!

You let the sodomite predators into our homes, our parishes, our souls, our schools, our emotions, our minds. The least you can do is now let us into your meeting to confront them. Today is the 15th anniversary of my brother's death, a man who left the seminary because one of your gay predator priests — a Jesuit — tried to perform oral sex on him. Something my parents had to hear the same week they heard from me that a different priest at Notre Dame had come onto me and the university tried to expel me over it.

You better believe you need to let us in! We've heard your sugar-coated malice and sweet-tasting poison for decades. It's time for you to shut up and sit down and listen. And you can tell your lawyers — that are paid for by our collection plate money — they don't need to attend.

Let us in, because we have something to say. The good bishops need to support this, they need to stop being so politically careful in associating with the so-called rabble-rousers, being terrified of what some sodomy-minded bishop and his gay mafia buddies will say or do.

Yep, thousands of faithful Catholics should descend on Baltimore that week of Nov. [12] and demand that you let us in. 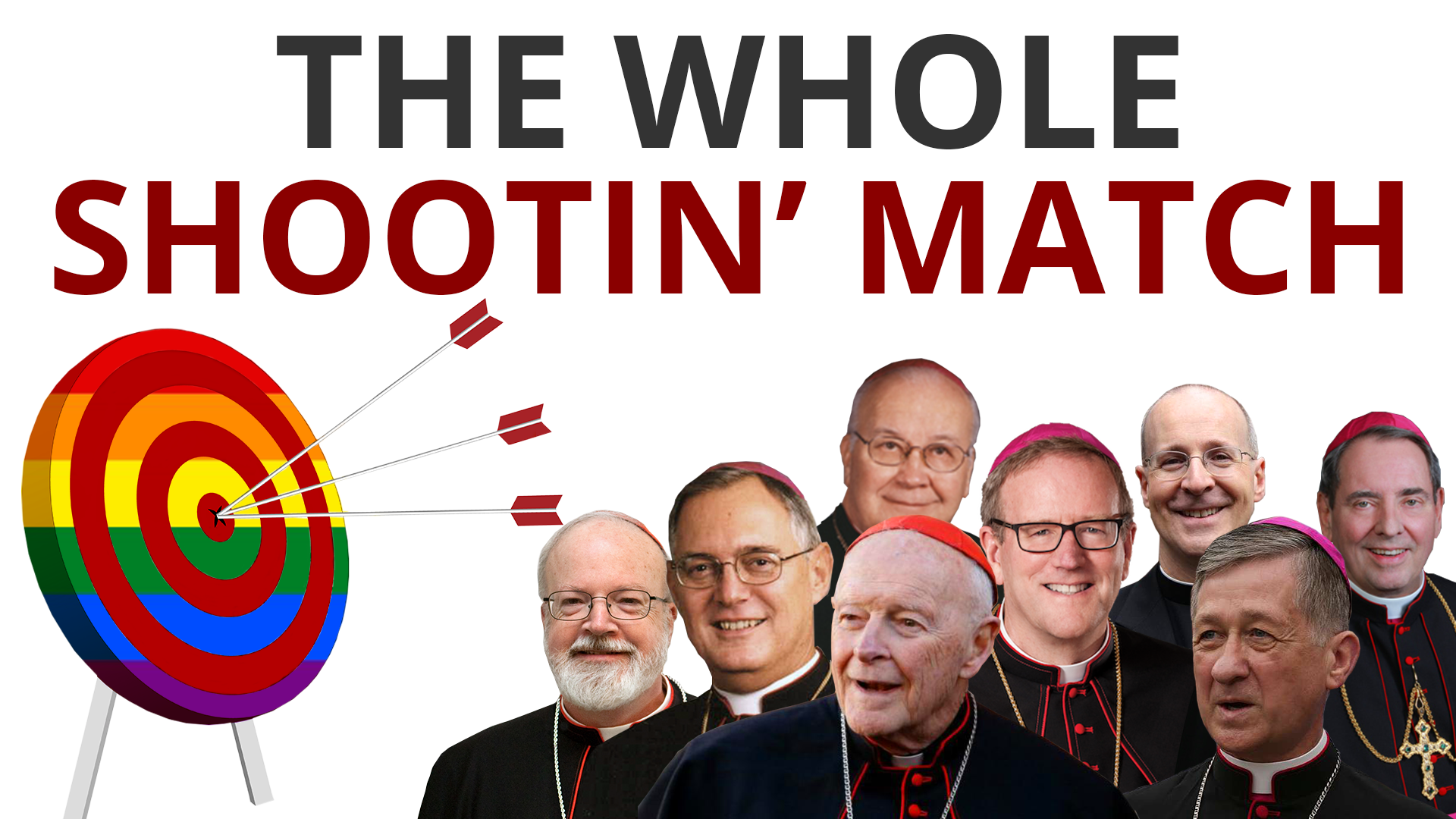 The Whole Shootin’ Match
Utter destruction of the Church.