And he needs to be dumped.

By now, you have no doubt heard that the high profile Fr. Thomas Rosica has fallen into disgrace as his unethical, immoral practices have come to light. Father Rosica is a living, breathing, walking, talking example of everything that is wrong in the Church.

Let's first review his past so as to better understand how he is a microcosm of all the modernism in the Church. Going back his days as a deacon, he gave an interview to a local Canadian paper insinuating that women should be priests — should have been stopped dead in his tracks right there.

Instead, he was allowed to be ordained in 1986, and for the better part of his career plagiarized at will in speeches, papers and articles — the most recent example discovered going back to at least 1990. He later came on to the international stage and gained notoriety for being the organizer of the 2002 World Youth Day.

There he ran up massive debt that had to be paid off by all the dioceses of Canada. Rosica blamed the lower-than-expected attendance on 9/11.

He managed to parlay his exposure from that World Youth Day into getting financial support, largely from one elderly wealthy Italian businessman in Canada, to found Salt + Light TV, which airs across that country. Salt + Light, while largely ignored for its poor production and bland content, nevertheless became another tool in Rosica's drawer to advance himself and modernist theology all over Canada.

He routinely interviewed heretics and dissidents, giving them a platform to spout their evil, the most notorious being the late Gregory Baum, a closeted homosexual cleric who denied just about every moral teaching the Church has.

Rosica gushed over him, calling him one of his heroes. The always self-promoting Rosica began to draw the ire of faithful Catholics for his own brand of dissent, so much so that when his un-Catholic positions became talked about on the internet, he threatened to sue one Canadian blogger who was calling him out.

Rosica was eventually forced to stand down by his superiors, in large part owing to his role as a liaison with the Vatican Press Office for the Holy See.

In that position, he did all he could to push the homo-agenda in the Church, lying daily to the international press corps during the 2014 Extraordinary Synod on the Family, telling them that essentially "gay rights" was a big topic of the bishops inside the synod hall where the press is not allowed to attend.

Church Militant and multiple other Catholic media sites confirmed with a variety of bishops that no such discussions were going on, and what little here and there that did infrequently come up nowhere near resembled how Rosica was lyingly presenting it.

Last year, the world of faithful Catholics was struck by his claim that the Pope — meaning specifically Pope Francis himself, no other popes — was now superior to Church Tradition and Scripture, which in a manner of speaking would put the Pope on the level of God.

At the Synod on the Youth in Rome last October, Rosica began talking openly of plans for the Vatican to issue what amounted to a "seal of approval" for Catholic websites, with the implication being if a site did not have approval from the Vatican, it was worthless.

His censorship plan was roundly moved and even welcomed by multiple faithful Catholics on the internet eager to have the condemnation of modernists in the Vatican as a badge of honor for their faithfulness and a signal to other faithful Catholics that their content could be trusted.

During his varied career, Rosica the plagiarizer managed to get himself on various college and university boards of directors and presidencies and so forth — all the while having committed and continuing to commit the greatest mortal sin of academics — plagiarizing — the most recent case being just last month at a talk in England.

His excuse when caught? His notes were disorganized and the interns were sloppy. Maybe once, Father; maybe even twice — but not for 30 years.

Plagiarism is an enormous breach of ethics. It is, at the same time, both theft and lying, stealing another's work and lying to the public, presenting it as your own. To be the stock in trade for a Catholic priest over 30 years is unthinkable.

For about the past five or six years, Rosica has been a valued commodity on the speaking circuit, especially in seminaries here in the United States as well as more off the beaten track academic conferences.

In those conferences and retreats for seminarians — enthusiastically set up by various modernist records around the world, but especially in the United States — Rosica routinely slammed orthodox Catholics as well as those engaged in trying to shine a light on the corruption, of which Rosica has been a major player.

His career has been a brilliant example of everything wrong in the establishment Church, the Church of Nice and how homosexualist modernist clerics are able to advance through manipulation of finances and self-promotion, as well as being protected by like-minded allies.

A couple of years back, Rosica's major benefactor died and finances for Rosica's Salt + Light were looking a little shaky. Rosica, using his influence as a Vatican agent, got the Knights of Columbus to pony up and pay much of his bills.

Having surveyed some — certainly not all — of the highlights from the past, now let's look to the present.

While having "resigned" from some of his immediate academic positions, he still runs Salt + Light and is still in the employ of the Vatican. His particular job at the Vatican is to be the English liaison for the media. Consider that for a moment: The man who communicates with the English-speaking press is an outed thief and liar. Why is he still there?

Likewise, a man who is beamed into a few Canadian households weekly but still uses his leadership of the little-viewed outfit as a career advancer should be instantly removed from his post by the board of directors. He is a liar and a thief.

Yet, to date, he is still in charge of Salt + Light, still getting sizable funding from the Knights of Columbus and still retains his position at the Vatican where he keeps lying to reporters and the faithful. And this is why Rosica is a living, breathing example of everything wrong in the Church, because despite his actions and his meaningless apology — which was a lie itself — he still continues on without any serious consequences for his actions.

This lying, thieving priest should be made to completely disappear from the scene with no exception.

How can reporters at the Vatican ever trust a word that comes out of the serial liar's mouth again? Does the Vatican have any concerns about its credibility on the world stage?

How about the Knights of Columbus — are they going to continue to fund his flagging cable TV operation with money earned from hard-working Catholic faithful? Do they not have any concerns about their credibility?

And what about the cable TV outfit itself? Surely there must be some people there who are dispirited about all this and want the operation to continue on some way limping along. Why is he still in charge or even allowed on the premises considering the great disrepute he has brought himself?

Perhaps the most telling single example of why Rosica represents everything wrong in the Church is one very brief exchange during an interview with fellow disgraced, lying cleric Donald Wuerl in the immediate aftermath of the McCarrick news. Wuerl lied and said it wasn't a massive, massive crisis, adding that the bishops should investigate themselves, something "rabbit hole" Cupich has pushed to the forefront.

But during the exchange, Rosica mentioned that McCarrick had been a good friend of theirs.

And to the point, to show the inbred aspect of the whole Church of Nice establishment, that interview came at the Knights of Columbus annual convention where Rosica and Salt + Light had been given prominent access and display in the convention center.

Yep, it's all about the network of modernists, homosexual clergy, cover-up bishops, liars, cheats and thieves running the show right now. It's a collection of gangsters in charge as was mentioned to us privately while in Rome this past week.

So Rosica will be the one to watch — his fate?

He has been invited to pollute the minds of seminarians, consistently lie to the international press, plagiarize for a career, distort the Faith to unimaginable proportions, all the while being funded by the Knights of Columbus, promoted by the Canadian bishops, even given honors by the Jesuits for his "service the the Church."

What happened to Rosica will tell you everything you need to know because he is a concrete case — caught red-handed.

Will there be the full reality of consequences for his actions — all of them — or will he be allowed to lay low after his meaningless apology and be resurrected?

Time will tell. You bet it will. 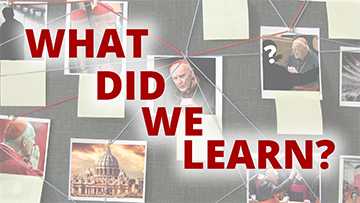 What Did We Learn?
And what did we not?