And they will stop at nothing to win.

While Nancy the Ripper was doing her best impersonation of a paper shredder at Trump's State of the Union last week, President Trump was circling like a shark, moving in for the kill. He declared the enemy of all things America: socialism — a governmental system the Catholic Church has condemned since it first emerged.

In last year's State of the Union, he took direct aim and said America would never become a socialist nation. And yes, the cameras in the House chamber zoomed right in on Bernie Sanders, whose most ardent cheerleader these days is Alexandria Ocasio-Cortez, a socialist marriage- made-in-Marxist-heaven if there ever was one.

Trump smells blood in the water, and he has good reason to. While all the noise and fury on the Left is coming from the democrat-socialists — who are, in reality, thinly-veiled Marxists — the rest of the DemocraticParty is getting really nervous, and we mean really nervous.

No matter how you slice or dice it — Bernie or Buttigieg — socialism won in Iowa. The three leading socialists combined — Bernie, Buttigieg and Warren — got well over half the votes of Iowa Democrats.

So an aging white male socialist millionaire — who says he hates billionaires, apparently because that's just too much money — is sitting in the pole position right now for the Dems in their bid to unseat Trump.

Or is it Buttigieg, a closeted socialist? He only gets the label of "moderate" when he's standing next to Bernie or Warren, who are just more extreme than his already extreme positions. His dad was a straight-up communist who taught at Notre Dame in South Bend.

In a still-unlikely aligning of the stars, Trump has become the standard-bearer for all things — well almost all things — conservative-religious. He is the conservative's Constantine to the communists' Maxentius, and the battle of the Milvian Bridge is now officially underway.

Socialism either gets to power or keeps power through killing. It crushes the human spirit and creates the state as God.

Bernie and gang support a system which, at its heart, is anti-God — another string Trump played and plucked throughout the speech, so much so that the liberal toilet paper-publication the National Catholic Reporter couldn't resist ripping into him for his appeals to religion.

Trump stood up there and went for the jugular in a tour de force that was inspiring, and the neck he was tearing open was socialism.

In a moment that is not getting a lot of attention owing to nasty Nancy the shredder, Trump took direct aim at the evil of socialism in Venezuela. He singled out for adulation and support Juan Guaido, whom the United States considers Venezuela's interim leader.

Trump tore into the very heart of socialism itself and used the South American country as the prime-time example, blasting Venezuelan leader Nicolas Maduro — deriding him as "an illegitimate ruler." He also called him correctly a "tyrant who brutalizes his people," and in perhaps a prediction of what lies in store for the Bernie-Ocasio Marxist camp, promised that Maduro's reign of tyranny will be "smashed and broken."

Socialism, he accurately reminded the approximately 38 million Americans watching, "destroys nations," which, for the record, is pretty much in line with Catholic teaching on the matter. Socialism either gets to power or keeps power through killing. It crushes the human spirit and creates the state as God. Along the way, they also lie.

Nancy, you might have heard, denied that her rage-inspired ripping was pre-planned. It was a spur-of-the-moment, spontaneous response, she would have people believe. It turns out the old gal seems to forget that there are video cameras everywhere. In this tweet from the Trump campaign with accompanying video proof, Nancy the Ripper gets caught, which means, of course, she was lying when she said she did not pre-plan it. No one can be surprised by this, but it is always sweet to have video proof nonetheless.

While the moment itself being caught on camera does have some obvious humor, the deadly reality just beneath the surface is that this party is comprised of killers and liars, and for faithful Catholics in particular, there is much to be fearful of here. But then again, the Church has known that for over a century.

This is now the party of Bernie and Ocasio-Cortez, and Nancy has torn up more than some paper. She has torn up any pretense to the opposite. Trump can be brash, yes. But he isn't a murdering communist.

It will be interesting to see how the Marxist wing of the U.S. hierarchy tries to spin all this. 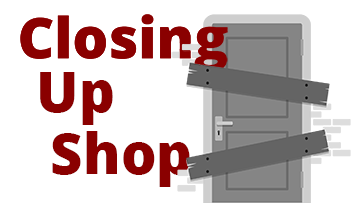 Closing Up Shop
Might as well declare bankruptcy next.