Detroit Abp. Allen Vigneron and his archdiocese are defying a court order to turn over records that many believe will prove the innocence of persecuted priest Eduard Perrone.

Perrone was very publicly removed from his post as pastor of Assumption Grotto Parish six months ago under an unsubstantiated claim of abuse stemming from a so-called repressed memory from nearly 40 years earlier.

As Perrone's lawyers kept digging and Church Militant kept pursuing the story, it has now come out that the original victim says he can't remember anything happening.

Vigneron's point man in all this, Msgr. Michael Bugarin, has run a "shoot first, ask questions later"-style investigation, determined to bring down Perrone at all costs, prompting loads of people to ask: Why is Allen Vigneron allowing this to go on?

When it became known by people outside the chancery that the original alleged victim was waffling, Bugarin went in search of other victims.

One man was so incensed that Vigeron's man tried to get him to lie about a sexual assault back in the day that he got in his car, drove up to Detroit and sat for an interview to blast the archdiocese for its malicious tactics.

And now this week, a court hearing is scheduled in Detroit to force the archdiocese to hand over files that many believe will not only prove Fr. Perrone's innocence, but reveal the extent of the malice and corruption rampant under Vigneron.

The court already ordered the files to be handed over, and the archdiocese has refused, claiming handing them over would be a violation of First Amendment protections.

Vigneron is hiding behind the Constitution when convenient, yet lets his men wantonly violate not only canon law but lie and try and coerce witnesses to say something happened when nothing ever did.

This is the archbishop that the nation's bishops just voted last week to be the number two man at the U.S. Conference of Catholic bishops, a man whose local clergy is in near-revolt at his insistence they try and squeeze $190 million out of the flock, and is allowing one of the most upstanding priests in his archdiocese to be raked over the coals by a very unseemly monsignor, whom he allows to continue this charade.

Church Militant recently sat down with one of Fr. Perrone's attorneys to get the update. 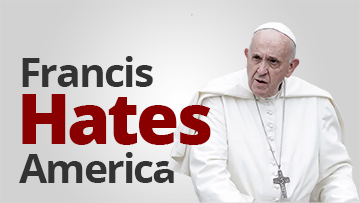 Francis Hates America!
He has drunk all the Kool-Aid.