The vocabulary of the 'Church of Nice.'

As events continue to unfold on the Church-State scene, visible through the lens of the campaign, it continues to amaze just how much crossover there is between the swamps in the Church and the State.

Understand, each swamp is all about maintaining its respective establishment — the status quo. The elites, those who profit most off their respective systems, do all in their power to maintain the status quo (again, because they are the ones who stand to lose the most if the system comes crashing down).

What's amazing is how much they each resort to the exact same tactics aimed at keeping the "sheeple" in line and, in a word, fooled. The weapons they use for this — and weapons is a better word than tactics because it speaks much more precisely to the spiritual war we are in — are lies, deceptions and half-truths.

For example, in the political arena, we have Joe Biden and Kamala Harris refusing to say whether they would pack the Supreme Court with extra judges. In fact, over the weekend, Biden actually said (no joke) when asked by a reporter if he thought the voters had a right to know, "No, they don't deserve to know." Wow.

Well, at least he's honest — on that score anyway. But his "honesty," or perhaps, better said, directness is aimed at trying to cover up the reality that Marxist Democrats want to pack the Supreme Court (which means add a bunch of new justices).

Of course, those new justices will all be child-killers. And the tiny, brief little period that finally conservative judges would have gained a majority will be wiped out, and more to the point never return again. Typical of the Marxist crowd when faced with defeat, they change the rules. They lie, deceive and cheat. It's the currency they traffic in.

Now, let's move the spotlight over to the Church establishment, which is no less accomplished in these same tactics. For starters, understand that the U.S. hierarchy, the swamp, profits from the Democrats being in power.

The problem is they dole out this money to groups who work against Church teaching in the areas of life and sexuality. But more than that, many of these groups only pay lip service to fighting poverty. They use the issue to get a foot into the door and then mobilize these communities to vote Democratic, to keep the Democrats in power.

The bishops are more than happy to get all that money, some of which they keep, of course, for administrative costs. In fact, pay attention: Nearly half the U.S. bishops' budget comes from government money — taxpayer money. Also, a sizable percentage of U.S. bishops (more than a quarter) are actually registered Democrats (where party affiliation can be known).

More than one out of every four U.S. bishops is a card-carrying member of the Party of Death.

You need to let that sink in: More than one out of every four U.S. bishops is a card-carrying member of the Party of Death. Others, whose party registration is not discoverable, certainly vote Democratic. They are all about politics in every other aspect of life; why wouldn't they be political when it comes to pulling the lever?

So let's dig into this — the Church's establishment and its desire to keep the status quo. First up is Bp. Robert Barron and his deliberate attempt to muck up the works and confuse Catholic voters by conflating various issues, pretending (deceiving people) that there is an equality between child murder and other issues.

Barron has issued his garbage analysis, no doubt in an attempt to keep on the side of elites in the Church, saying the death penalty should also weigh heavily on the minds of Catholic voters. That is a total falsehood. Abortion is an intrinsic evil, always wrong and immoral and grave in every single circumstance because of what is being done.

The Church has taught that back to the time of the Apostles. The Church has also taught for millennia that the death penalty is permitted: It is not an intrinsic evil.

And it doesn't matter in the slightest that Pope Francis, whom Barron is trying to prop up here, doesn't like the death penalty. Even a pope doesn't get to change Church teaching — even a pope.

No pope can do that, and certainly not some celebrity auxiliary bishop from Los Angeles. Barron is wrong, but he is trying to suck up to his fellow establishment bishops to stay in their favor (and perhaps even advance his career, who knows?). But there does seem to be a certain degree of career advancement under the reign of Pope Francis for those bishops willing to tout the party line on liberal politics: Cupich is the premier example but by no means the only one.

Likewise, Relevant Radio's Fr. Rocky issued a voting manifesto last week that stressed the evil of nuclear war and urged that it must be on the minds of Catholics when they go to vote. Seriously?

There are 60 million dead babies and counting, that's key — the continuing, ongoing slaughter, which can in no way compare to a mere threat of nuclear war. One is real; the other a potential. It's actual killing versus theoretical killing.

But when we look at the list on Relevant Radio's homepage of the episcopal advisory council, we perhaps gain some insight into Fr. Rocky's motives. To cheese off that many bishops — as well as those not on Relevant's list — well, that would not go down very well for Fr. Rocky.

Remember, Relevant already accepted Biden advertisements, saying it had no choice — not any other single option but to accept them. That is until they did what they should have done to begin with, which was change their status so they were no longer legally required to. They did it ultimately, but why not do it originally?

Again, however, remember: Relevant Radio is an establishment organ. The monstrous evil and corruption and filth in the Church is never allowed to be discussed unless the circumstances become so well known that their hand is forced. And even then, when the corruption is discussed (in a very limited fashion), no bishops can ever be tied to it, like there is this corruption cloud floating around in the atmosphere, and, eventually, it floats over the Church.

It is a moral crime for the U.S. bishops, through agencies like Relevant Radio and Bishop Barron's self-promoting Word on Fire, to suggest to Catholics — even hint at — the possibility that Joe Biden, a heretical, gay-marrying child killer is an acceptable candidate for the office of President.

The Washington, D.C. swamp, all the Democrats and many Republicans, hate Trump because he is blowing up and exposing their lies. That same attitude is prevalent in the Church swamp as well. Trump must go, and any deceptive, confusing thing we have to do and say to accomplish that — up to and including twisting Church teaching — well, that's okay because it's for a "greater cause."

Washington, D.C. archbishop Wilton Gregory had no problem denouncing Trump earlier this year, even ordering his clergy to show up at a White House protest (even though his cover men claim that clergy weren't ordered, merely suggested to).

Understand, faithful Catholics: You are being taken for a ride.

Well, that's not how the priests we were in touch with took it. But see, Gregory is part of the homosexual mafia in the Church — a mafia which has spent decades deliberately dumbing down the laity so they would embrace the twisting and confusion of Church teaching.

Another bishop (actually a cardinal) who owes his promotion to homopredator Theodore McCarrick and who is in lockstep with Wilton Gregory is Joseph Tobin of Newark. Tobin (are you sitting down?) is on the bishop advisory council of Relevant Radio.

Seriously, a man who promotes active homosexuality and allowing homosexual couples to receive Holy Communion — what on earth is such a man doing on Relevant's advisory council? Exactly what does he advise on?

Understand, faithful Catholics: You are being taken for a ride. There are wicked men in miters confusing many, many Catholics, deliberately confusing them to keep the status quo, to keep the machine well-oiled.

But these men are only able to do what they do because second-stringers help them in their evil. There is no way every bishop in America, and that means every priest as well, should not be denouncing Biden as unfit for office owing to his support of child murder.

Racism, nuclear war, the death penalty — none of these adds up to the body count of abortion, not even close. Do not be fooled by the lying, cheating, deceptive, self-interested episcopate or their sycophants, who are more interested in deception and confusion than they are in truth.

Biden and his party are evil. No Catholic — especially a member of the clergy — should be vague about this evil. But if Biden captures the Catholic vote and goes on to win the White House, no doubt the champagne corks will be popping across bishopland.

But their partying will be short-lived. Marxists always kill those who got them to power, regardless of how loyal they may have been on the path to power, thinking they would be somehow rewarded.

Their reward will be the wrong end of a gun barrel, which is fine if that's what they want. But they don't have a right to lie and utter half-truths and deceptions to Catholics to achieve their goal. 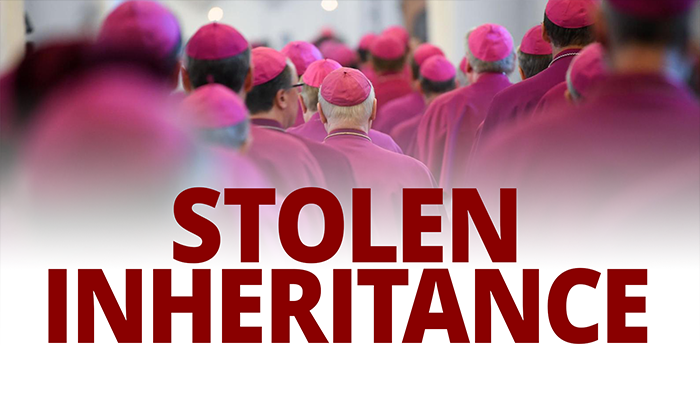 Stolen Inheritance
Time to get it back.