It's time for Catholics to embrace and ACT on the truth.

May 30, 2019  0
Podcast Available for Premium Subscribers

Two stories broke earlier this week that were pretty significant on their own, but when you look at them together, the conclusion is especially noteworthy.

The upshot, Pope Francis is lying when he told a reporter he knew nothing about McCarrick because senior Vatican officials knew all about McCarrick including Donald Wuerl who has gotten caught for the second time lying about all this.

This means everything Archbishop Viganò testified to last August about the Pope, McCarrick and Wuerl lying about and covering up the evil of McCarrick is true, as well as the cover-up being orchestrated by a cabal of homosexual men who are senior clergy in the Church such as Cardinal Edwin O'Brien, Blase Cupich, Joseph Tobin and Kevin Farrell.

First the Pope news: He granted a recent interview to a Mexican reporter who asked him point blank what he knew about McCarrick. His answer: "I said that several times, that I didn't know, no idea, otherwise I wouldn't have kept quiet."

Now that's curious, very curious. Exactly when has the Holy Father ever said once, much less several times, that he had no idea about McCarrick?

When directly confronted by international media on the plane returning from Ireland last summer about Viganò's charge that he knew all about McCarrick’s homopredation and ignored it and resurrected his career after Pope Benedict had sidelined him, Francis famously said, "I'm not going to say a single word."

And then he said journalists should do their jobs and get to the bottom of it. Since that time, the Pope has not said anything about what he knew and when he knew it.

To now try and play this off as if he has been saying all along he knew nothing is simply not true.

In the related piece of news, which in itself is also a pretty big story, McCarrick's former secretary, Msgr. Anthony Figueiredo, has released confidential correspondence to some select media outlets proving — note the word we use there, proving, as in beyond any shadow of a doubt — that top Vatican clergy knew all about McCarrick and the restrictions placed on him and they all ignored them.

Included in the bunch who knew about McCarrick was, drum roll please, the lying, cheating, scheming Donald Wuerl who was instrumental in getting his former seat as archbishop of Washington, D.C. filled by another member of the homosexual current in the Church, Wilton Gregory.

In fact, it's a given that Wuerl would have been placed in his position as archbishop of D.C. back in 2006 by McCarrick who needed Wuerl to cover for him.

McCarrick was an evil, homosexual predator, communist infiltrator into the Church who sexually assaulted dozens of seminarians during his climb up the episcopal ladder.

He embezzled enormous sums of money which he used to curry favor with the greedy Vatican clergy who helped his career as well as covering up for him.

As his power and influence grew — through blackmail or secret cash payments and relationships with other wicked prelates — McCarrick simply became the living breathing example of someone who senior clergy considered "too big to fail."

Somewhere along the line, it was decided that if news ever got out about McCarrick, it would be a PR nightmare for Rome.

So he was allowed to continue. He was instrumental in starting up the Papal Foundation, being the bishops face for their response to original homopredator sex abuse crisis in 2002; he was key in crafting the policy where bishops would never be investigated.

All of this was known, a true inside operation. And the laity were lied to repeatedly, ripped off, deceived and any other verb you can think of by an American hierarchy that was too busy jettisoning tradition and covering up their own homopredator priests to care.

And as Bishop Steven Lopes importantly noted last summer, "We all knew." Yes, they did — which brings us back to Pope Francis, Donald Wuerl and Archbishop Viganò.

So now let's tie the two stories together. Wuerl knew all about McCarrick, having been caught publicly now not once, but twice lying about it. Pope Francis knew straight from the mouth of Viganò, who admitted that he knew.

We know from the correspondence just released, as well as other sources, that Wuerl knew. So Wuerl and Pope Francis both knew, and more to the point, when questioned, they lied. They both lied.

And pay close attention to this: The Pope lied — yes, the Pope lied. And not only lied as in the past, but continues the lie. Viganò even came out yesterday and charged him with lying.

One on level, that's not horribly surprising. He has surrounded himself with liars — liars about sex abuse cover-up; liars about Church teaching; liars about homosexuality; lies, lies and more lies. And yet he himself, while a big one, is not the actual problem. He is as much a symptom of a much larger problem.

A problem that allows a bishop in Buffalo to cover up a local clergy loaded with homosexual men.

A problem that allows a cardinal in Chicago to keep hidden and unreported that one of his predecessors may very well have been a predatory homosexual himself.

A problem that allows a cardinal in New York to keep in service and lie about a priest who stole enormous sums of money to use for sadomasochistic sex with a gay-for-pay prostitute.

These men, from the top down, have constructed one massive lie, brick by brick and have used the souls of those whose care they are charged with to promote their lie. The Pope is lying. Wuerl is lying.

Our Blessed Lord stood in front of the religious leaders of His time and declared to them that their "father is the devil, and that the devil was a liar and a murderer from the beginning."

He also said, "For this reason I was born into the world to bear witness to the truth. Whoever hears the truth, hears my voice."

No faithful Catholic on now seeing all of this revealed for the monstrous evil that it is can fail to act according to his own circumstances of life.

This must be resisted with every ounce of strength you have. 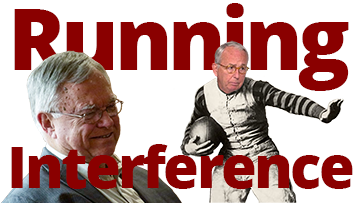 Running Interference
The goal is to PREVENT the truth from coming out.