Living in a Dream World

Time to wake up.

As we stand here today, we still don't know how things are going to play out in the White House race as well as in the U.S. Senate, but in the current circumstances, you'd rather be in Joe Biden's shoes than the president's.

Church Militant is working aggressively behind the scenes on all the issues surrounding these races and bringing you the latest (as well as most trustworthy) information and analysis available.

In the meantime, we need to deal with the reality we are in. Even if a few million votes have been included in the counts that are fraudulent — and that's still a big if, that number — America still shifted toward embracing socialism.

But still, given that, even if you take away a couple million votes from the national count, a majority (nationally) of voters checked the box for Biden.

Currently, the numbers are:

You'd have to take away almost 4 million votes from Biden nationally to get to a tie.

Of course, national numbers are not distributed evenly across the country: Some places are decidedly more socialist-embracing than other places that are more American-oriented.

This is certainly something to be celebrated and good for those women, a small little red wave of women who will give Nancy or her replacement headaches next year, not to mention egg on her face.

But overall, the national embrace of socialism is certainly trending. What's behind it? Well, a number of factors, but in this particular election, there is the big elephant in the room: Donald Trump.

According to every exit poll, a majority of voters who voted for Biden voted not for Joe, but against Trump. But why?

What is it that would create such animus for a president who had restored America's economic might, bolstered U.S. influence around the world, been the first president to not have us involved in a foreign war in many administrations, created historically low unemployment levels across the board (especially for minority groups), delivered the largest tax cut in American history and overall raised the country to heights unseen for decades?

The answer all boils down to his personality and how he is portrayed. The American culture, greatly assisted by the U.S. hierarchy, has become massively emasculated — taught over the past decades to care more about feelings than the truth.

The American culture, greatly assisted by the U.S. hierarchy, has become massively emasculated.

The educational institution was seized control of decades ago, as was the media, and in a combined effort, they embarked on a campaign to switch out the national intellect for a panoply of emotions.

Truth and justice were dropped along the wayside and replaced with emotions. Emotions have become the standard by which everything is measured, and in 2020 especially, Trump's tone is what has motivated an avalanche of hatred against him.

It's a classic example of "You can't handle the truth" writ large. Trump speaks plainly. He speaks directly. But in a culture that has become terrified of truth, because of the consequences of the truth, that is anathema.

And this is where so-called conservatives need to be held up to be shamed. Too many "conservatives" have done next to nothing to prevent this tsunami of evil from engulfing the country.

Life for many conservatives — and in this group, we include Mass-going Catholics — is way too comfortable. They have grown accustomed to watching and wanting other people do something while they themselves just tweet, sign online petitions, belly-ache with friends and then think (having vented) they have actually done something.

The truth is, they have done and accomplished nothing. They sat by while their gay priests manipulated Church teaching, thinking it wouldn't be cricket to scold him after Mass.

They would not go out, physically get up off their couches, and protest crooked bishops persecuting good and holy priests — priests who are saying the truth and trying to lead their parishioners to Heaven.

For the most part, they clutched their pearls during the scandalous McCarrick revelations, but then most moved on, pretty quickly forgetting all about it.

Too many Catholic men have swallowed the poison of toxic femininity, taking the easy way out whenever possible, betraying their innate masculine virtues of self-sacrifice on behalf of the defenseless and innocent.

The "women's lib" movement of the 1960s has created a dual enemy of Western civilization: Toxic women and pathetic men. And if you need any proof of that, look no further than the Marxist party ticket of Joe Biden and Kamala Harris.

Biden is living proof of the degradation of the masculine in the past half-century — a man who has the blood of tens of millions of children on his hands (as opposed to defending them in accord with his natural traits).

And Kamala Harris is the perfect Marxist woman — a woman who sold her soul early in her career through adultery to gain power and ascend to where she is now. Where were the conservative men, Catholic and otherwise, in the political arena, as the scheming and conniving Marxists were engineering their coup?

Why, when republicans had control, did they not pursue an aggressive policy of purging voter rolls over the years or lining up honest citizens to watch and monitor polls in thousands of races where the Marxists kept inching closer to power?

In the Church, where were all the men challenging the hierarchy and its evil, despicable deeds? Even today, why is James Martin allowed to roam freely around the nation's dioceses, only seldom meeting any resistance from men who, online, present themselves as faithful?

In the Church, where were all the men challenging the hierarchy and its evil, despicable deeds?

The point of all this is simple: What is playing out before us is the final act in a play begun long ago that was ignored by those who have the intelligence to understand what's going on but are severely lacking in the will to actually do something about it.

And then, suddenly, when the reality of the consequences of their inaction hits them square in the face, they start issuing calls for prayers.

Why? Because we've reached the end — or at least appear to have. Why should our Heavenly Father answer the prayers of a people that did nothing — or next to nothing — for decades as they idly watched a culture falling apart or their Church being overrun Sunday by Sunday?

Why should He answer those prayers if there is no firm purpose of amending our ways? The Catholic Church has been allowed to sink into a sea of disgrace, and it's because over a half-century ago, Catholic men were happy to make a bargain with the bishops.

They would ignore the evil in the hierarchy in exchange for silence on contraception. And that bargain is still in effect, with no end in sight. A huge majority of Catholics and their bishops have been happy to accept a world of gray, have refused or failed to see the world straight on as it is, in terms of black and white.

They live in a dream world. Donald Trump speaks in those terms, and that is what has upset so many people. The president is direct. At the end of the day, it's not just the tone; it's the message.

The entire universe is ordered in terms of black and white, including (most importantly) salvation. Anyone who lives outside of this truth is not likely to be saved. That's why the evil that spews from the mouth of Bp. Barron is so poisonous: The garbage that "We have a reasonable hope that all men are saved" is pernicious.

But evil always shows its true face eventually, and Barron came out cheering for James Martin's latest book on "spirituality." Get real, bishop. Another example — among many — of a failed man rising to power in the Church.

Faithful Catholics, political conservatives cannot coexist with these Marxists in the Church and the culture. They must be exposed, battled against and defeated.

And when you look at big-name conservative cultural icons, be careful.  Even though they say something (even many things) that is spot on, they are only talking about the symptoms of the cultural rot.

As long as they fail to recognize that contraception and the worldview that supports it is what has brought us to this point, ultimately, they provide nothing but historical footnotes. They present the symptoms — sometimes very well — but they entirely miss the diagnosis. That scenario will never arrive at a cure, if a cure is even possible anymore, before it all ends fatally.

We are witnessing a euthanizing of Western civilization and can do nothing about it because the "hospital" was long ago taken over by killers while we were allowing ourselves to be put to sleep.

Whether the final call is a Trump come-from-behind victory or a Biden descent-into-even-more-evil, unless men, especially Catholic men, commit to reversing this in whatever circumstances present themselves, expect nothing to change.

As a program note, Church Militant will be live at 6:30 p.m. ET Friday with a post-election update. 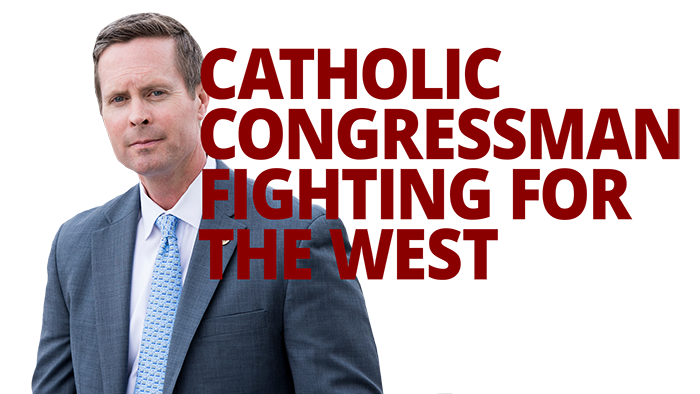 Catholic Congressman Fighting for the West
The Church Militant in D.C.