How can any of them escape damnation?

Last Friday, Church Militant produced a Post-Election Special as part of an ongoing commitment to keep you the most up to date on news and Catholic analysis regarding the election.

Near the wrap-up of that show, we told you not to be surprised if, over the upcoming weekend, the news media would begin declaring the demonic Biden the winner.

Well, sure enough, right on cue, all the major media fell like dominoes — with CNN going first, declaring Biden the next president. They must have thought that felt like sweet revenge against Trump, the bane of their existence.

That prompted the announcement (coordinated with the media) from the Biden camp that the president-elect would address the nation around 9 p.m. on Saturday, which of course he and his anti-Catholic, bigoted running mate (who will no doubt be plotting or at least hoping for Biden to die or resign) did.

But in the flurry of media hype, one notice didn't get as much play: It was the "congratulatory" statement from the nation's bishops' conference — you know, the ones who collectively plotted to cover up the rape of thousands of altar boys and deny them justice.

They were the ones who were just fine staying silent as Biden paraded around his basement on social media passing himself off as a "Catholic," despite his loving embrace of child-slaughter and sodomy.

Let's draw the connection shall we — the media is Luciferian because they engage in the work of the Devil, which, in a word, is deceit. It was Fr. John Hardon who coined that term, and having been in both the Catholic world as well as the professional media world my whole life, I can testify that he is spot on.

Since the media is involved in deceit, to willfully join them in that deceit in a blatant attempt to curry favor and give cover for their deceit is to do the work of the Devil. Period.

In the U.S. bishops' analysis, everyone goes to Heaven.

The U.S. bishops, as a body, belong to the Devil. They possess no supernatural faith (not in any meaningful fashion anyway) and are on a path to Hell that it is so apparent, it appears there is no turning back because they have no desire to turn back.

They have no desire because they are totally wedded to this world and don't really believe in Hell, or at the very least, they don't believe anyone really goes there.

In their analysis, everyone goes to Heaven, everyone, that is, except Church Militant and its supporters because, for the U.S. bishops, the greatest and apparently only sin is to challenge them and expose their wickedness.

The media have absolutely no say — nothing, zero, nada — in who the next president is. They never have. They simply report and then make their own projections.

And, in the middle of a circus full of charges of voter fraud, ballot manipulation, and so forth; it's hard to imagine anything more egregious and professionally unethical than to treat a race like it's over when they know that simply isn't true.

But as we know, the media in this country hasn't been interested in truth in decades. The bishops know that. Hell, a 5-year-old knows that. So to join in the media's portrayal of the election as though it's a done deal and it's time to move on as the U.S. bishops have done is filthy.

Perhaps in their rush to do a collective hierarchical suck-up to Biden and the rest of the swamp (of which they are deep collaborators), they completely overlooked the fact that the Catholics they should be most attentive to — the ones who actually go to Mass — voted in the majority for Trump.

And the ones most committed to Trump are the most ardent Catholics. Any faithful Catholic, any believing Catholic who ever gives another penny to these wastrels of humanity needs to be committed to the nearest asylum.

These are the same men who in more than two dozen cases bankrupted their dioceses in the face of a multitude of sex abuse claims — most of those revolving around homopredator buddies of theirs. But, and here's the rub, they didn't declare bankruptcy because they couldn't afford the payouts. They declared bankruptcy as a means to stop those sex abuse lawsuits dead in their tracks.

When a company — and that's what the Church under these devils has become — declares bankruptcy, any legal action against it is frozen, giving the "company" the opportunity to prevent any future expenses from arising.

In short, the young men their gay clerical buddies raped are getting screwed again by cunning deceitful devils in miters: You know, the same ones cheering on Biden because their pals in the media crowned him "president."

When the bishops' statement was published Saturday on the heels of the media projections, sincere and honest Catholics, neither of which this crowd of emasculated and homosexual men would know anything about, collectively convulsed and grew instantly angry — angry at the lies, the cheating, the deception, the injustice, the continued cooperation with evil these men portray.

Never once have they lifted a finger in the cause of justice for the unborn. And since a giant number of them are gay themselves, having gotten through seminary no doubt by passing certain "examinations" by their own bishops and faculty, they of course scurry to the bandwagon of Biden.

Perhaps most insulting to Catholics (not to mention God Himself because of the extent of the lie) was this line: "We congratulate Mr. Biden and acknowledge that he joins the late president John F. Kennedy as the second United States president to profess the Catholic faith."

Whatever number of human lives Hitler had on his hands when he died, it pales compared to what "Uncle Joe" will have on his when he, at last, dies. Know this: The bishops of the United States are Hell-bound of their own choosing because they will not repent.

Whatever number of human lives Hitler had on his hands, it pales compared to what 'Uncle Joe' will have on his when he, at last, dies.

They are no better (and are actually worse) than the Pharisees and scribes who attended King Herod as he ordered the killing of the innocents to hold on to his power.

The bishops, more than any politicians, have not just the blood of countless millions of innocent children on their hands, but most frighteningly, the damnation of tens, perhaps hundreds of millions of souls.

All you have to consider is this: Both the nation's bishops and Planned Parenthood offered Joe Biden congratulations over the weekend. Both organizations are all about lies, deception, cover-up and profit. Both will share the same eternal fate as well.

The offspring of the Devil, like all offspring, resemble each other, sometimes remarkably. This is one of those times where a remarkable resemblance is clearly visible. They have more in common than they disagree on, and when it comes to self-interest, they each lay aside their differences, pretended or not.

And just so we are perfectly clear, Your Not-So-Excellent Excellencies, Joe Biden is not the president or the president-elect, despite what you and your fellow Luciferians say. Lucifer, like you, must be resisted at all costs.

Ask me about "MAGA Million March." 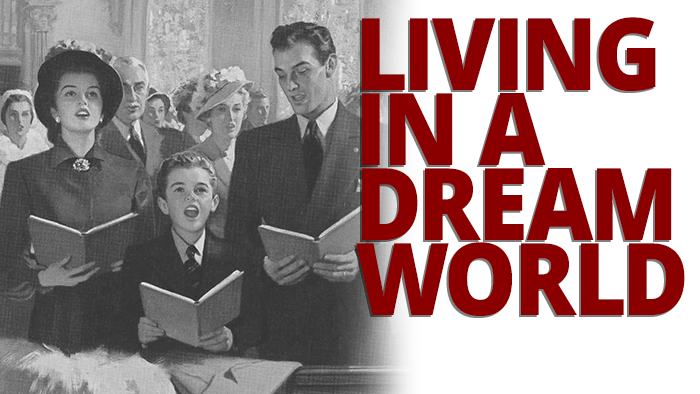 Living in a Dream World
Time to wake up.